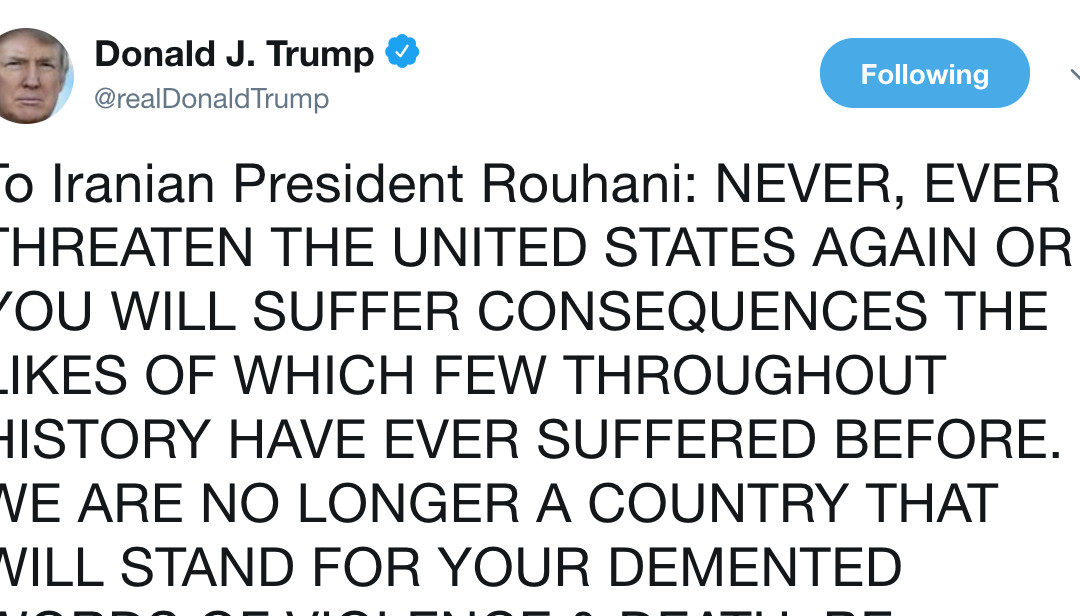 Are the drums of war threatened by the United States of America against the Islamic Republic of Iran, deafening a few weeks ago, beginning to recede?

American president Donald Trump tweeted :”If Iran wants to fight, that will be the official end of Iran, ..Never threaten the United States again!”

The American aircraft carrier, Abraham Lincoln, was dispatched to the conflict zone, ratcheting up tensions. Initially announcing that 120,000 US troops was  to shore up the 80,000 present in regional bases such as Afghanistan, Iraq, Syria and the Gulf, it was whittled down to a mere 1,500 personnel.

Fuelling further tension four oil tankers were ‘sabotaged’ in the port of the United Arab Emirates on May 12 near the Straits of Hormuz. Then a rocket was fired into the Iraqi capital’s heavily fortified Green Zone Sunday night, landing just a  kilometre from the massive US embassy.

Sceptics suggest this was a false flag operation manufacturing a pretext into attacking Iran, reminiscent of the 2003 aggression against Iraq. Just as Iraq faced crippling economic sanctions prior to being militarily decimated, there is an economic siege on Iran that is falsely accused of having an “ambition” to develop nuclear weapons, and that it poses a “threat” to world peace and stability.

This is redolent of the unforgettable image of former American Secretary of State Colin Powell ominously twirling a vial containing anthrax that could kill millions, ostensibly in the hands of Saddam Hussein; false satellite images of mobile vans manufacturing chemical weapons; doctored documents of a “super-gun”; and other weapons of mass destruction (WMD’s) including ambitions of possessing nuclear weapons.

In the past 250 years, Iran has not attacked or threatened to attack any country. In fact, it was Iran that was invaded by Saddam Hussein backed by Western and Gulf Arab states in a devastating war that cost $2 trillion and a million lives; it is Iran that is surrounded by hostile US forces and is confronting the menace of Israel’s nuclear missiles and US warships.

That Iran does not have a nuclear weapons programme nor nuclear weapons was confirmed by the Pentagon, 16 major US intelligence agencies, the National Intelligence Estimate (N.I.E.) and the International Atomic Energy Agency (IAEA).

Yukiya Amano, the Director of the UN’s IAEA in charge of inspecting Iranian sites said Iran was “subject to the world’s most robust verification regime” and after multiple inspections said Iran was in compliance. He confirmed that Iran is not developing nuclear weapons and poses no military threat.

Despite this, in May 2018, USA President Trump unilaterally pulled out of the Iran Deal, the Joint Comprehensive Plan of Action (JCPOA),  agreed to in 2015 by the 5 permanent UN Security Council members plus Germany.

Israel’s Netanyahu praised Trump repeatedly for pulling out of the nuclear deal. He has been a prime driver since the 1990s of having the international community confront Iran over its alleged nuclear ambitions, maintaining it presents an existential threat.

Since Netanyahu became the prime minister of Israel in 2009, he has intensified the pressure to attack Iran, unrelenting in lobbying international bodies and the American Congress.

Israel’s unchallenged hegemony was shaken with the 1979 Islamic Revolution in Iran  which ousted the American-backed pro- Israeli Shah Pahlavi. This changed the dynamics of the region with Ayatollah Khomeini expressing Iran’s unequivocal commitment to the Palestinian cause shutting down Israel’s embassy .

Israel’s regional dominance continues to be threatened because of Iran’s fierce independence; its support for the Resistance movements Hizbollah, the first Arab group to inflict a humiliating defeat on Israel, and the Palestinian groups  Islamic Jihad and Hamas; and defence of Syria, which Iran considered was a step towards emasculating Iran.

The third leg of the troika seeking Iran’s downfall is Saudi Arabia, whose ruling elite also saw the Iranian Revolution of 1979 as a mortal threat to its position and power. It financed Saddam Hussein’s war against Iran, only to see an expansion of Iran’s influence in Iraq over the last 15 years, and of the oppressed masses in Yemen, Bahrain and Saudi Arabia itself.

Iran has watched the American orchestrated, Israeli instigated and Saudi financed  destruction, destabilisation and regime change in Afghanistan, Iraq, Libya, Egypt, Turkey, Lebanon and Syria, primarily to maintain their hegemony over the oil supplies and to protect the Zionist entity.

Despite the fulminations of the 3 B’s, as Iranian foreign minister Javad Zarif calls them, Bibi Netanyahu, Bin Salman and the American neocon John Bolton, the Pentagon seems to be hesitant launching a full scale attack on Iran.

The US sent hundreds of thousands of troops to occupy Iraq, lost trillions of dollars and 3,000 soldiers in this aggression that was based on deception and fabrications. Today, American officials including warmongers like National Security Adviser John Bolton and Secretary of State Mike Pompeo, have to sneak into Bagdad furtively like frightened little cats.

It is imperative that world leaders knock some sense into this vile troika, the USA, Israel and Saudi Arabia, who have failed to win a war in over 4 decades, but have unleashed death, destruction and misery world over. A war against Iran in the hope that a servile, obedient and compliant state emerges is doomed to fail.