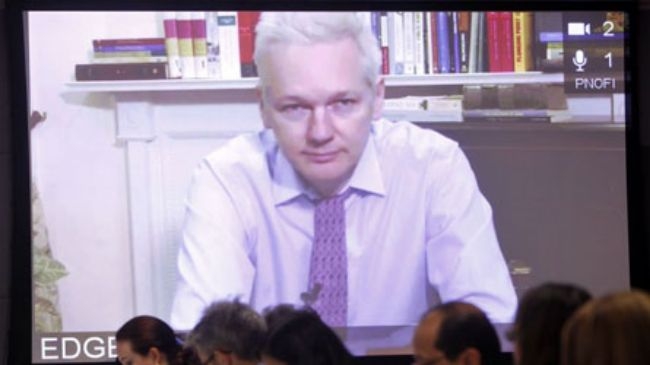 The founder of the WikiLeaks website has ridiculed US President Barack Obama’s claim of supporting free speech in the Middle East while persecuting his group for publishing leaked US diplomatic cables.

Speaking Wednesday in a New York event via a video feed from the Ecuadorean embassy in London, where he is holed up for fear of being extradited to the US by British officials, Julian Assange mocked President Barack Obama for defending free speech in Muslim nations during his Tuesday address to the UN General Assembly as he underlined his own case of being targeted by US authorities for exercising his right of free speech.

Assange reportedly insisted that Obama has “done more to criminalize free speech than any other US president.”

“It’s time for President Obama to keep his word… and for the US to cease its persecution of WikiLeaks,” he said.

Assange described as ‘audacious’ the US government efforts “to take credit for the last two years of progress,” given the history of US sponsorship of toppled Arab dictators.

Assange further emphasized, “It must have come as a surprise to the Egyptian teenagers who washed American teargas out of their eyes (during the revolution that toppled US-backed regime of Hosni Mubarak) to hear that the US supported change in the Middle East.”

Citing Obama’s rhetoric at his UN address glorifying the freedom of expression, Assange also pointed to the reported treatment of US soldier Bradley Manning in a US prison, where he was allegedly held in isolation, stripped and left unclothed for hours in his cell, as well as the harsh condemnation of Wikileaks by senior American officials.

The remarks came at a packed gathering of diplomats on the sidelines of the annual UN General Assembly and hosted by Ecuadorean Foreign Minister Ricardo Patino, who announced that he would meet with his British counterpart William Hague on Thursday to again demand a safe passage to Ecuador for Assange by the UK.

Patino also blamed British authorities for violating Assange’s rights, reiterating that he may have to remain in the embassy in London for up to ten years.

Assange sought refuge at the Ecuadorian embassy in London three months ago from extradition to Sweden and eventually to the US, where he has been harshly condemned by top officials for leaking classified American military and diplomatic documents that reveal targeting of Iraqi civilians by invading American troops as well as backing despotic rulers in the Middle East and elsewhere, among other things.

Meanwhile, the Sydney Morning Herald has reportedly published “declassified US air force counter-intelligence reports,” that refer to Assange and Wikileaks as “enemies of the United States,” placing him and his website in a similar legal category as al-Qaeda and the Taliban.