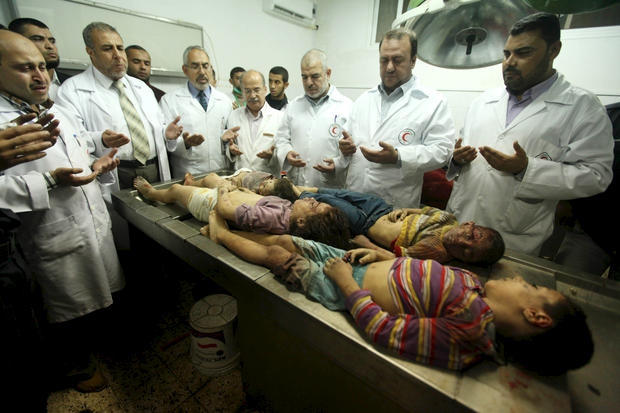 Among the latest horrifying examples of incitement to mass murder by Israeli public figures, Gilad Sharon, the son of former prime minister and notorious war criminal Ariel Sharon, has called for the Israeli army to “flatten” Gaza as the US flattened the Japanese city of Hiroshima in 1945 with an atomic bomb.

“The residents of Gaza are not innocent, they elected Hamas. The Gazans aren’t hostages; they chose this freely, and must live with the consequences,” wrote Sharon in the extremist publication The Jerusalem Post. Sharon elaborated:

We need to flatten entire neighborhoods in Gaza. Flatten all of Gaza. The Americans didn’t stop with Hiroshima – the Japanese weren’t surrendering fast enough, so they hit Nagasaki, too.

There should be no electricity in Gaza, no gasoline or moving vehicles, nothing. Then they’d really call for a ceasefire.

Were this to happen, the images from Gaza might be unpleasant – but victory would be swift, and the lives of our soldiers and civilians spared.

Sharon added that “There is no middle path here – either the Gazans and their infrastructure are made to pay the price, or we reoccupy the entire Gaza Strip.”

As of Sunday night, the end of the fifth day of Israel’s air assault on Gaza, more than 70 Palestinians, half of them civilians, had been killed in hundreds of Israeli airstrikes.

“Don’t give a hoot about Goldstone”

Meanwhile in a message to soldiers, Knesset member Michael Ben-Ari of the National Union party exhorted soldiers to kill without thought or mercy.

“Brothers! Beloved soldiers and commanders – preserve your lives! Don’t give a hoot about Goldstone! There are no innocents in Gaza, don’t let any diplomats who want to look good in the world endanger your lives[;] at any tiniest concern for your lives – Mow them!,” Ben-Ari was quoted as saying by the website HaKol HaYehudi.

Ben-Ari was referring to the UN-commissioned Goldstone report that documented war crimes and crimes against humanity during Israel’s 2008-2009 invasion of Gaza which left more than 1,400 Palestinians, mostly civilians, dead.

“We love you alive and smiling, not, heaven forefend, ‘just’ and dead in Gaza – Sodom [-] there are no righteous men, turn it into rubble. Paint it red! We are worried about you and rely on you. We all do, all of the Nation of Israel,” Ben-Ari added.

The phrase “the Nation of Israel” refers to all members of the Jewish religion, not to citizens of the State Israel, notes Dena Shunra who translated Ben-Ari’s comments.

On 15 November, the second day of an Israeli assault, Ben-Ari addressed a hate rally in Tel Aviv, calling for more bloodshed in Gaza. New video of that rally, which this blog reported on previously, shows Ben-Ari in action.

Ben-Ari is also notorious for his incitement against Africans and for his hatred of Christians. In July he tore up a New Testament, calling it “abominable” and threw it in the trash.

Read more examples of incitement to violence by Israeli public figures, for example the prominent rabbi who says the Israeli army “must learn from the Syrians how to slaughter the enemy.”

All of these inciters will no doubt be pleased that in the bloodiest attack of Israel’s assault so far, 11 Palestinians from a single family, including four young children and an 81-year-old woman, were killed on Sunday when an Israeli bomb flattened their home.