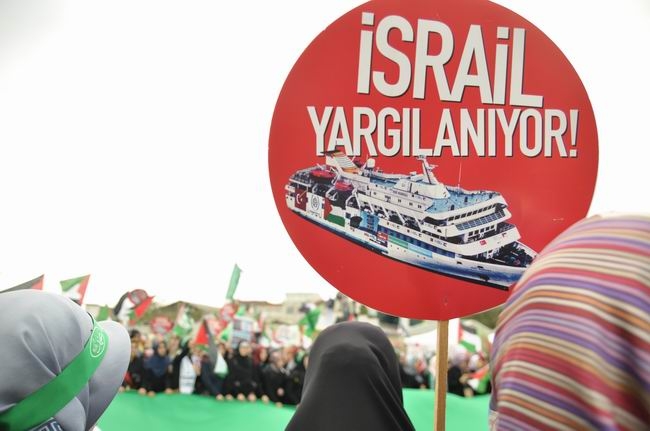 On November 6, 2012, Turkey announced that a court in Istanbul will try in absentia four ex-Israeli military commanders over the IDF Freedom Flotilla raid in 2010. The Mavi Marmara was trying to break the blockade of Gaza and bring humanitarian help to the refugees there. Nine Turkish activists were killed by Israeli naval commandos (Shayetet 13), who had boarded the ship.

The event caused a sharp deterioration in the relations between Turkey and Israel, which until then had been close allies. At the beginning of May 2012, Turkey’s Justice Ministry Sadullah Ergin finished his probe on the affair and requested information from the country’s Foreign Ministry on several IDF soldiers; a fact reported by the Turkish Today’s Zaman. On May 24, it was made public that criminal charges had been placed by Turkey against four IDF officers, demanding life sentences. Among the indictments were “inciting murder through cruelty or torture” (see Criminal Charges Placed against IDF General Ashkenazi).

The accusations target the IDF upper echelon. The list is led by former IDF Chief of Staff Lieutenant General Gabi Ashkenazi; the others are the ex-naval chief Admiral Eliezer Marom, the former head of military intelligence Major General Amos Yadlin, and the former head of the air force Major General Avishai Lev. Over 500 people will give testimony during the trials, most of them passengers who were aboard during the event. There is no question about the events; all the facts are acknowledged also by the IDF and the UN; both published reports on the violent event. The UN inquiry said that Israel’s decision to board the ship and the use of substantial force was “excessive and unreasonable.” Yet, considering the videos of the event, the UN asessment looks unreasonably soft towards Israel. Heavily armed commando soldiers attacked and killed people armed with little more than improvised sticks. Moreover, on June 13, 2012, Israel State Comptroller Micha Lindenstrauss published his report on the Israeli government’s behavior in the event. Prime Minister Netanyahu turned out to be rather clumsy and incompetent to the extent of causing an unnecessary disaster. In the words of the comptroller: “The decision making process regarding the dealings with the Turkish flotilla led by Prime Minister Benjamin Netanyahu and under his responsibility was found to include essential and significant flaws” (see Netanyahu Found Guilty by State Comptroller). One could expect Turkey to make use of the Israeli reports and place charges also against Mr. Netanyahu. However, this is not posible. On February 15, 2002, the International Court of Justice halted a Belgian attempt to try Prime Minister Ariel Sharon for the massacre of hundreds of Palestinians in Lebanon in 1982 when he was Israel’s minister of defense, ruling that serving ministers are protected from prosecution. Thus, Turkey chose to center its efforts on the responsible IDF officers.

“In absentia” is Latin for “in the absence;” a phrase which refers to a trial at which the defendant is not physically present. Turkey decided to conduct the trials in such a fashion because the four officers are in Israel and there is no chance the latter will allow them to be present at the event. Such trials are widely considered as violations since the defendant cannot answer the charges. This explains the rapid Israeli reaction; on the same day the trials were announced, the Israeli embassy in Ankara called them a “unilateral political act with no judicial credibility.” One could almost be tricked to support the Israeli position on this, but then one remembers two classes of events in which Israel clearly supports trials in absentia. Despite preceding Israel, the latter obviously accepts the process known as the Nuremberg Trials. These were a series of military tribunals, held by the World War II allied forces, of prominent Nazi Germany leaders. They were held in the city of Nuremberg, Bavaria, Germany, in 1945–46.

One of the defendants, Martin Bormann, was tried in absentia, and sentenced to death; he had been the successor to Hess as Nazi Party Secretary. His body was found only in 1972; it is claimed that he died in 1945. An indirect testimony of the Israeli acceptance of the Nuremberg Trials is that Israel conducted similarly problematic trials. The Nazis and Nazi Collaborators Punishment Law (Hok Le’Asiat Din BaNatzim) from August 1, 1950, enables the execution of Nazis. Between 1950 and 1961, this law was used to prosecute 29 Jewish Holocaust survivors alleged to have been Nazi collaborators. The first and only time it was used to execute a person was in the Adolf Eichmann case. He was illegally kidnapped by Mossad from Argentina in 1960 and two years later was hanged. What makes this a special event from a legal point of view is that this law is a retroactive and extraterritorial law since the State of Israel didn’t exist during WWII. Moreover, the alleged crimes were neither committed in Israel nor against Israeli citizens. An ex post facto law (Latin for “after the fact”), or retroactive law, is a law that retroactively changes the legal consequences of actions committed prior to the enactment of the law. Such laws are expressly forbidden by the United States Constitution, though some countries accept them. They cannot be accepted as fair practice, regardless of the justifications used for their approval. Simply, how can one protect oneself against a law that has not been legislated? Years later, it was used to harass Ivan Demjanjuk (see Western Psikhushka Killed Demjanjuk).

This is enough to render worthless Israel’s protest against the trials in Turkey. Yet, there is another issue. A topic which is often reported by Israeli media and that has never been denied by Israel, is its endless appetite for extrajudicial executions. I expanded on that in Scary Sicarii: Israeli Extrajudicial Executions, but the pattern is clear. A person is declared “undesirable” by the military establishment as it is specifically targeted and assassinated. No trial is held, no chance to defend himself is given to the victim. Similarly distressing, are detentions held without legal process, since Israel claims that its official possess precognition powers. They can detain someone on the grounds that he is about to commit a crime (see Minority Report: IDF arrests Palestinian prisoner released in Shalit swap). These cases show that Israel does not recognize the rule of law. It is a lawless, savage society. The victims of the Freedom Flotilla raid cannot find Justice. The performance of similar crimes in the future cannot be deterred. In this context the Turkish reaction can be understood, despite being based on a problematic legal principle. Israel’s Nuremberg Trials are about to begin.