No Show Trial for Israel 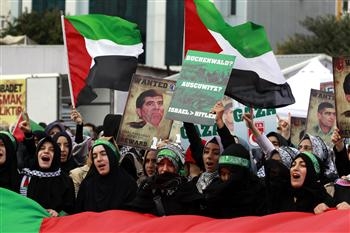 No Show Trial for Israel

November 08, 2012 – Istanbul – Israel squirms and wriggles like a worm on a fishhook over the Turkish trial into the deaths of nine unarmed humanitarian aid volunteers on board a ship bound for Gaza.

Tel Aviv has called the hearing in Istanbul a “show trial” with no legal foundation or meaning at all since, rather predictably, the four military commanders at the centre of the brutal air and seaborne assault are being tried in absentia.

In a 144-page indictment, the four stand accused of inciting murder and injury, and prosecutors are seeking multiple life sentences for the top brass group which includes the former Israeli military chief of staff Gabi Ashkenazi.

I sat and listened in a hushed courtroom as the trial opened on the first day with a number of survivors recounting the military assault on their aid flotilla in May 2010 bound for besieged Gaza.

They came from around the world and included a former US Army colonel, journalists and peace activists who witnessed the massacre onboard the Mavi Marmara.

They told how live ammunition was fired at them killing nine and injuring countless more; how hundreds of thousands of dollars in cash, laptops, credit cards and other valuables were stolen never to be seen again.

Aid collected and organised by the internationally renowned and respected Turkish charity IHH simply disappeared and most was never recovered.

Their stories and graphic recollections could have come from the pages of an action-packed thriller about piracy on the high seas, but the pirates were Israelis and the international waters were the Mediterranean.

The wood-panelled courtroom was packed, standing room only with scores more standing outside the long corridors waiting for snippets of information from within the chamber. As the evidence was given there was a profound silence punctuated by occasional, uncontrollable sobs from two rows of widows and mothers who had lost their loved ones. A man sitting next to me was unable to stop the trickle of tears pouring from his eyes as the damning evidence unfolded … this was not a show trial, a political stunt or a symbolic hearing. This was real.

Yet back in Ankara, Israeli embassy officials continued to insult the dead by pouring scorn on the trial calling it a “unilateral political act with no judicial credibility” because the four accused were being tried in absentia.

Not for the first time the weasel words of Israeli officialdom smacked of hypocrisy – were these not the same mealy-mouthed accusations levelled by Nazi supporters against the Nuremberg Trials?

Those military tribunals, launched after the Second World War, saw the top Nazi leaders tried in absentia during 1945-46. Martin Bormann wasn’t present in the dock but he must have spent the rest of his miserable life looking over his shoulder after the death penalty was imposed. Yes, it was a pity that the Nazi Party Secretary was never brought to justice, but at least some of those survivors of the regime got closure from the sentencing knowing that he would spend his life waiting for that knock on the door.

Israel knows all about trials in absentia – in fact it has conducted similar courts without the accused being present. According to the Global Research agency, between 1950-1961 the Nazis and Nazi Collaborators Punishment Law (Hok Le’Asiat Din BaNatzim) was used to prosecute 29 Jewish Holocaust survivors accused of being Nazi collaborators. The first and only time it was used to execute a person was in the Adolf Eichmann case. He was illegally kidnapped, drugged and moved by Mossad from Argentina in 1960 and two years later was hanged after a televised trial in Israel.

“What makes this a special event from a legal point of view is that this law is a retroactive and extraterritorial law since the State of Israel didn’t exist during WWII. Moreover, the alleged crimes were neither committed in Israel nor against Israeli citizens. An ex post facto law (Latin for “after the fact”), or retroactive law, is a law that retroactively changes the legal consequences of actions committed prior to the enactment of the law.

“Such laws are expressly forbidden by the United States Constitution, though some countries accept them. They cannot be accepted as fair practice, regardless of the justifications used for their approval. Simply, how can one protect oneself against a law that has not been legislated? Years later, it was used to harass Ivan Demjanjuk (see Western Psikhushka Killed Demjanjuk),”says Global Research.

The trial in Istanbul is very real and as I sat there and watched the faces of the survivors, the families of those who died, I realised this event is the cornerstone of a historic legal action which will eventually deliver justice to those seeking it.

Protest as it might, the State of Israel which is also no stranger to carrying out extra-judicial killings, thereby doing away with the right to a trial by jury, hasn’t a leg to stand on when it makes hollow claims about the legitimacy of the Istanbul court.

Israel, as everyone knows, has a long distance relationship with international law. It has violated or ignored more than 70 UN sanctions – this is more than any other country in the world. It is also a stranger to due legal process and still has detentions without trial even for children under the age of 18.

During the coming days almost 500 people are expected to give evidence before the court reaches a verdict on the four accused.

Israel’s foreign ministry said in a statement that the trial “clearly falls under the category of a show trial, an act which has nothing to do with either law or justice” adding it was ”merely a propaganda display” and that Turkey should deal with the issue through bilateral dialogue.

The truth is while Israel has expressed “regret” over the Mavi Marmara deaths it still steadfastly refuses to apologise despite a raft of damning reports and comments from a number of bodies including the United Nations. This typically stubborn refusal to say “sorry” will come to cost the Zionist State dearly – it is already regarded as a pariah state by many.

But this reprehensible position questioning the legitimacy of the trial insults every victim, including those who perished in the Holocaust and the survivors who relied on Nuremberg to help give them some sort of closure through justice.

The Turkish Prime Minister, Recep Tayyip Erdogan, who plans to make an official visit to Hamas-controlled Gaza soon in the wake of the high profile visit by the Emir of Qatar, describes the flotilla deaths as “state terrorism”.

Whatever the outcome Israel must accept the result – it can not play two games. The rule of law is there for one and all and there should be no exceptions.

British journalist Yvonne Ridley is also a patron of Cageprisoners