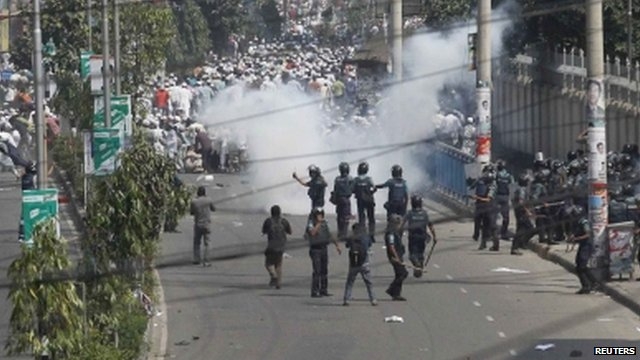 The Media Review Network notes the eruption of violence that has occurred in Bangladesh. More than 30 people have died in fierce clashes between police and protesters in the Bangladesh capital, Dhaka, compounding the chaos in a country struggling to come to terms with a building collapse that killed more than 650 people last month.

The clashes began on Sunday after 200,000 protesters led by a group called Hefajat-e-Islam marched into Dhaka. Hefajat-e-Islam set the government a May 5 deadline to introduce a new anti-blasphemy law and promised to launch a campaign to dethrone the government unless their demands are met. The members of the group demanded the death penalty for those who they think defame Islam. The 13-point list of demands also included a ban on the right of women to work outside the household and the prohibition for women to mix with men. The members of Hefajat-e-Islam also demanded the release of those accused of war crimes during country’s liberation war in 1971, which established the sovereign nation of Bangladesh.

The government of the overwhelming Muslim country rejected the demands on the basis that the nation practices a Constitution that defines the country as a secular democratic republic.

These events outline the severe and fragile nature of the country’s political and civil standing as well as a country divided. The clash of ideologies could plunge Bangladesh into a cycle of violence as the two main political parties, locked in decades of mutual distrust, exploit the tension between secularists and members of Hefajat-e-Islam ahead of elections that are due by next January.

The Media Review Network calls upon our government to immediately summon the Bangladeshi High Commissioner to discuss this most vexing problem in order to facilitate a speedy resolution and bring about stability in the Bangladeshi state. Also, we urge the Bangladeshi government to initiate a national dialogue between all the parties concerned so that consensus is reached as how to move the process forward. There must be no preconditions attached to this dialogue.