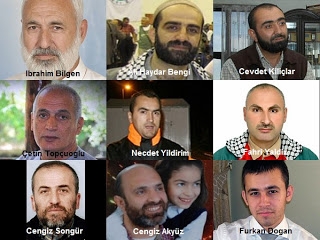 The Israeli “investigation” of its own crimes exonerated itself, again. The ball is now in Turkey’s and Palestine’s court.

In the first part of the so called Turkel report, in January 2011 the Israeli appointed commission (not independent but known apologists for the Israeli government) “found” that its attack on the Mavi Marmara and the Gaza freedom flotilla (Turkish and international-flagged civilian ships in International waters), was “kosher” by International law.

International legal experts, UN investigators, human rights organizations, the Turkish government, and most of the world governments and world public disagreed. In fact, if the US has not blocked action by NATO (because decisions must have agreement of all NATO members), this is an actual attack on a NATO country. But today (February 6, 2013 more than two years later) came the second even more shocking (though not unexpected) part of the Turkel report. This is the most convoluted whitewash sophistry in jargon that one can see. This part was supposed to look at the actions of the Israeli commandos as they pirated (and yes that is the proper term PIRACY) the ships but also in actions in the West Bank. Turkel concluded that Israel’s oversight and investigations procedures of war crimes in this incident and in actions in the West Bank “in general meet the requirements set by International law.”! Ironically in another part of the report it says that Israel unlike other Western Countries had no definition or delineation of what constitutes war crimes! The commission thus could not really evaluate something they had no definition of and if they wanted the definitions that most countries ply it is available in International law (e.g. the Geneva conventions which were not brought up in this context by Turkel). Israel is obliged to follow International law including refraining from war crimes. I do not need to go through the rest of the lengthy report since it is mostly dealing with “operational improvements” in the actions of the Israeli forces and the Israeli government. It actually regresses by making a recommendation to the government that such events as attack on Palestinians or Internationals should not be investigated by Israeli police or Israeli civilian legal system but by the “Israeli military advocate general”. This is the same advocate general who received 240 well documented cases of abuse by the Israeli forces in 2012 but not a single case was brought to indictment/trials of the perpetrators (this is from Yesh Din, an Israeli human rights organization that looked into this). And this was a relatively quiet year. In 2003 and 2004 there were hundreds of executions and other war crimes by the Israeli military.

The Turkel report assigned no responsibility and was clearly intended as a PR campaign to show that no International and truly independent investigation is needed since the occupation army and the colonial state do a “good job” investigating themselves though they can improve “operationally” in this good performance! Even the Israeli investigation of the massacre of hundreds of civilians at Sabra and Shatila in 1982 (a massacre performed by Lebanese phalange paid mercenaries of the Israeli army with lighting and protection by Israeli forces) was a bit more nuanced. That 1982 investigation at least assigned some responsibility to then defense minister Ariel Sharon who left political life briefly but returned to become prime minister instead of being sent to the Hague for war crimes. And of course independent UN investigations are not allowed or if they happen are dismissed out of hand. Even the killings of US citizens are not investigated independently (for example see the murder of Rachel Corrie).

I think this “Turkel report” should be the straw that breaks the camel’s back. I think Turkey (a member of the International Criminal Court and a member of NATO) and Palestine (which can now apply for membership) should take Israel to the ICC. I think Palestinian and Turkish officials meeting with President Obama next months should say to him: enough is enough. It pained me to see Salam Fayyad meeting with Israeli Knesset members and pleading with them to release the Palestinian tax money that Israel stole. After 20 years of “Oslo”, will they learn that pleading and begging colonizers/occupiers for our rights does not work?

If you want to waste a lot of time reading gibberish, here is the website of the Israeli commission that exonerated the Israeli actions: see http://www.turkel-committee.com but for for real reports on what happened on the Mavi Marmara and the pirated ships people can read the reports below:

All human rights organizations who looked into this even wanted stronger actions (and of course these were not on the agenda of Mr. Turkel). See for example Amnesty which first described the initial Israeli report of January 2011 as a whitewash
http://www.hurriyetdailynews.com/default.aspx?pageid=438&n=israeli-report-on-mavi-marmara-raid-a-whitewash-amnesty-claims-2011-01-29
and came up with a strong report of its own
http://www2.ohchr.org/english/bodies/hrc/docs/ngos/AI-4_Israel_HRC105.pdf

The Turkish government detailed report (though I coulf not find a direct link to the text, there are many new reports on the internet about it).

But if Israel is about transparency, why not release the hundreds of camera/video cameras that it confiscated from the hundreds of passengers on board? Why not even mention them in the Turkel report (which did use the selective videos by Israeli military commandoes). The few smuggled videos are rather damning and indeed show war crimes.

Here is a segment of execution by Israeli soldiers of a peace activist on board the Mavi Marmara http://www.youtube.com/watch?v=Pi6c10ntFZk
And here is a far longer smuggled video that shown many other atrocities issues

http://www.democracynow.org/2010/6/10/exclusive_journalist_smuggles_out_video_of
And of course Mr. Turkel and company did not care about the testimony of hundreds of survivors. Here is just one chilling testimony: http://blogs.aljazeera.com/blog/middle-east/kidnapped-israel-forsaken-britain
And the Turkel report does not allude to these Photos that show Mavi Marmara passengers protecting, aiding Israeli soldiers http://aliabunimah.posterous.com/blog-post-israel-hasbara-fails-again-pics-sho

Gideon Levy wrote an article that says “Israel does as it pleases: Until now it’s worked. Syria, Lebanon, Iraq, Iran, Sudan and, of course, the Palestinians wiped the saliva, said it was rain and restrained themselves, because they are weak and Israel is strong.” http://www.haaretz.com/opinion/israel-does-as-it-pleases.premium-1.501032

Well I say again this “Turkel report” could be the straw that breaks the camel’s back if Turkey (a member of the International Criminal Court and a member of NATO) and Palestine (which can now apply for membership) can get their act together. I do hope we will not have to wait for the next war crime to act.