We will return to our homes in Palestine 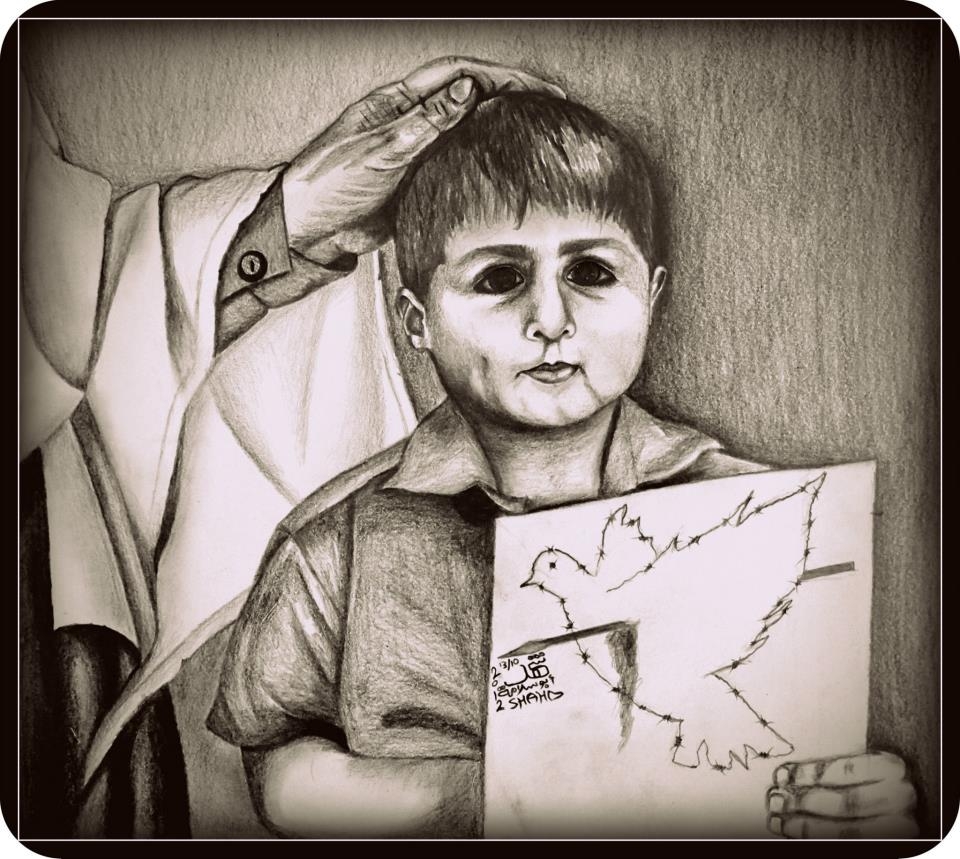 Despite Abbas and Balfour, we will return to our homes in Palestine

My latest drawing that comes as a response to any who said of Palestinians that the old would die and the young would forget.

Today, I look back in anger to a gloomy day in the Palestinian history. It happened 95 years ago, long before I could have witnessed it, but I still live its impact daily. Without even a shred of legitimacy, on 2 November 1917, the United Kingdom’s Foreign Secretary, Arthur James Balfour, promised the leaders of the Zionist movement they could establish their national homeland in Palestine, violating my people’s right to self-determination.

Balfour laid the groundwork for the conspiracy launched against the people of Palestine which led to our Nakba, the mass killing, dispossession, and systematic ethnic cleansing of the Palestinian people at the hands of Zionists gangs.

Great Britain is responsible for this atrocity against my people that the Balfour Declaration triggered, for the expulsion of three quarters of a million Palestinians, who with their descendants now number many millions more. It is also responsible for the Palestinians who survived the violence and mass expulsion, and were forced into ghettos within occupied Palestine under a military regime for decades.

An everlasting hope that has no remedy

Last night, I was reading Revolutionaries Never Die, the biography of George Habash,one of the Palestinian leaders who founded the Arab Nationalists Movement, and in 1967, the Popular Front for the Liberation of Palestine. In his book, he vividly describes the terror he saw inflicted on the people of his town, Lydda in 1948.

He wrote, “June 11, 1948 was the darkest day I ever witnessed in my life. Zionists arrived and ordered us to evacuate our homes … We were forced out of our homes, leaving everything behind under the threat of their weapons. I saw the neighbors fleeing their houses while being watched and threatened with violence. We didn’t know the reason for our mass expulsion. We thought that they planned to gather us in one of the fields to search our houses without having any witness, and then let us go back home. We never imagined that they were actually uprooting us, and that we would never return. Indeed, everything was organized to lead us outside Lydda as soon as possible.”

Not only George Habash thought that the Nakba was the darkest period in Palestine’s history. All the victims of the ethnic cleansing of more than 500 cities, towns and villages shared the same sentiments. I heard my grandparents repeatedly say them. They were expelled from Beit Jerja to the Gaza Strip, and they grasped the dream of return until their last breaths.

I recall my grandmother’s affectionate words when my siblings and I surrounded her once. “I lost my father amidst the panic of that gloomy day,” she said. “I never saw him again, so I realized that he was buried at home. But at the same day I lost him, I gave birth to your uncle Khader. This incident, with all its harshness, symbolized for me the Palestinian struggle, which will end only when we return.”

My illiterate grandmother couldn’t have been more right. The Palestinian struggle will only end when justice prevails, and no one will ever manage to distort this glorious struggle for justice. According to Mahmoud Darwish, “To be a Palestinian means suffering an everlasting hope that has no remedy.” After more than six decades of the Nakba, refugees have never given up hope to return, and they never will. There are those who thought that the elderly will die and the young will forget. We haven’t forgotten. We are still here, the young and the old, suffering the Israeli occupation’s terror and continuing our struggle for justice.

On the anniversary of Balfour Declaration, Mahmoud Abbas came with another declaration competing with Balfour’s.

I felt sick when I first read an article about it. I could imagine Abbas saying this. At the same time, I wished that it could be fabricated news that he had renounced his — and our — right to return to our homes and villages. Then I saw the interview when he uttered those shameful statements, and I couldn’t believe what I heard. I am sure that the majority of Palestinian people and people of conscience worldwide were as frustrated as me.

“As far as I am here in this office, there will be no armed third intifada,” Abbas promised, stressing “never.”

Abbas, you are foolish if you think you can prevent the dignified Palestinian people from expressing their anger at ongoing attacks and violations of their most basic rights, and the ongoing expansion of Israeli settlements? You can’t stop them from practicing their legitimate struggle, through all legitimate means, to attain their justice, freedom, and independence.

Did Abbas forget that the first intifada was a nonviolent struggle, and that Israel is the party that turned to brutal violence, especially against children, to crush it? Did he forget that when the second intifada began, Israel fired a million bullets in the first days and weeks to try to crush it and dozens of unarmed civilians were killed in those first days?

The right to resist is legitimate

With such a statement, Abbas is ignoring all the sacrifices Palestinians made in their legitimate struggle. Thousands of our people who never carried a weapon were cruelly shot dead or injured, tortured or imprisoned by the occupier. Who then are the “terrorists”?

And of course nobody supports “terrorism” or harming innocent people regardless of who they are. But with such a statement, does Abbas really mean to suggest that all those who used arm struggle to fight for the dignity and freedom of the land and people, are “terrorists,” as the Israelis claim? Was Dad a terrorist? Is this the “president” of Palestine talking, or an agent of Israel? Mr. Collaborator, we will never allow you to defile the names of our martyrs, who paid with their lives as the price for freedom.

I have always been proud to be the daughter of a freedom fighter. I believed Ghassan Kanafani when he said, “The road to Palestine is neither far or near. It’s the distance of revolution.” Kanafani was one of the most accomplished young Palestinian patriots and intellectuals. At the same time as his pen commemorated the glories of martyrs, awakening people to their national rights, he joined the PFLP’s popular resistance. Kanafani was murdered by Israel’s Mossad.

Couldn’t Abbas grasp how insulting it was to Palestinians for him to use “terror” to describe their struggle? Or did the United States dictate to him to say so? Being ‘nice’ while addressing the ‘democratic regimes’ doesn’t mean giving up your people’s most basic rights guaranteed by UN resolutions.

I feel bad when forced to use UN resolutions and international agreements to justify our right to return and legitimate right to resist occupation and ethnic cleansing and to defend ourselves. Why should Palestinians, as oppressed people, have to use these resolutions to prove the legitimacy of our rights? They were issued only to absorb our anger, as evidence of supposed objectivity, not to be implemented. We, the Palestinian people, don’t want resolutions, we want actions! We want real justice, not just words tossed into the air!

Regardless, UN resolutions guarantee the right to use force in the struggle for “liberation from colonial and foreign domination.” General Assembly Resolution A/RES/33/24 of 29 November 1978:

Reaffirms the legitimacy of the struggle of peoples for independence, territorial integrity, national unity and liberation from colonial and foreign domination and foreign occupation by all available means, particularly armed struggle.

Giving up the right of return

Abbas crossed another red line, the right to return, also guaranteed by a UN resolution (194). “I am from Safed,” he said. “I want to see Safed. It’s my right to see it, but not to live there. Palestine now for me is the ’67 borders, with East Jerusalem as its capital. This is now and forever … This is Palestine for me. I am [a] refugee, but I am living in Ramallah. I believe that [the] West Bank and Gaza is Palestine, and the other parts (are) Israel.”

He didn’t only surrender his people’s right to return, he also surrendered his people. He couldn’t have had in mind Palestinians who steadfastly remained in their lands, torn between their Palestinian identity and their cursed Israeli passports, enduring daily harassment and discrimination. He also forgot the millions of Palestinian refugees outside Palestine, many still enduring horrible conditions in their refugee camps in the diaspora.

After hearing Abbas, I allow myself to speak on their behalf to reaffirm that Abbas doesn’t represent us. His declaration ignores the majority of Palestinian people, who still embrace their right to return. It is an individual and collective sacred right, which no one can surrender. Abbas also ignored the historical fact that Israel was established on the ruins of ethnically-cleansed Palestinians villages.

Abbas, I hang the map of historic Palestine around my neck, like it hangs on every wall of many Palestinian houses. Not a day passes without me pointing at my original village, Beit Jerja, while uttering the title of Mahmoud Darwish’s poem, “I came from there,” with a slight smile. It’s the last thought I enjoy every night as I close my eyes, recalling my grandmother’s vivid description of the green fields of grapevines and olive and citrus trees. We’ll never stop dreaming of a dawn when the Israeli apartheid regime no longer exists, and we return to both see and live there, walking freely through Haifa, Yaffa, Al-Lod, Nablus, Jerusalem, Gaza, Bethlehem, and every inch of historic Palestine