Why Obama won’t take on Israel 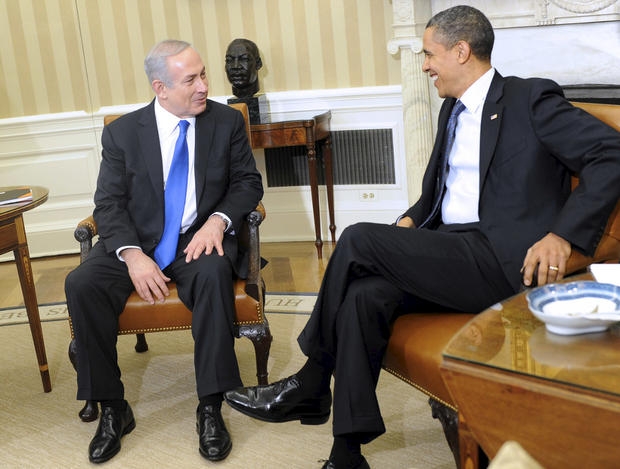 Why Obama won’t take on Israel

Barack Obama’s victory in the US presidential election last week was greeted with general unease in Israel.

Surveys conducted outside the US shortly before polling day showed Obama was the preferred candidate in every country but two — Pakistan and Israel. But unlike Pakistan, where the two candidates were equally unpopular, he scored just 22 percent in Israel against a commanding 57 percent for Mitt Romney.

Given these figures, it is unsurprising that Israel’s right-wing prime minister, Benjamin Netanyahu, made little effort to conceal his political sympathies, laying on a hero’s welcome for Romney when he visited Jerusalem in the summer and starring in several of his TV campaign ads.

The general wisdom is that the president, freed of worries about being re-elected, will seek his revenge, both for Netanyahu’s long-term intransigence in the peace process and for interfering in the US campaign.

Newspaper cartoons summed up the mood last week. The liberal Haaretz showed a sweating Netanyahu gingerly putting his head into the mouth of an Obama-faced lion, while the right-wing Jerusalem Post had Netanyahu exclaiming “Oh bummer!” as he read the headlines.

The speculation among Israelis and many observers is that an Obama second term will see much greater pressure on Israel both to make major concessions on Palestinian statehood and to end its aggressive posturing towards Iran over its supposed ambition to build a nuclear warhead.

Such thinking, however, is fanciful. The White House’s approach towards Netanyahu and Israel is unlikely to alter significantly.

Netanyahu’s bullish mood was certainly on display as voting in the US election was under way: his government announced plans to build more than 1,200 homes for Jewish settlersin East Jerusalem, the presumed capital of a future Palestinian state (“Israel pushes forward with 1,200 homes in East Jerusalem settlements,” Guardian, 6 November).

The reality, as Netanyahu understands well, is that Obama’s hands are now tied as firmly in the Middle East as they were during his first term.

Obama got burnt previously when he tried to impose a settlement freeze. There are no grounds for believing that Israel’s far-right lobbyists in Washington, led by AIPAC, will give the president an easier ride this time.

And as Ron Ben Yishai, a veteran Israeli commentator, noted, Obama will face the same US Congress, one that has “traditionally been a stronghold of near-unconditional support for Israel” (“Obama better for Israel,” Ynet, 6 November).

Obama may not have to worry about re-election but he will not want to hand a poisoned legacy to the next Democratic presidential candidate, nor will want to mire his own final term in damaging confrontations with Israel. Memories are still raw of Bill Clinton’s failed gamble to push through a peace deal — one that, in truth, was a far-more generous to Israel than the Palestinians — at Camp David in the dying days of his second term.

And whatever his personal antipathy towards the Israeli prime minister, Obama also knows that, the Israeli-Palestinian conflict aside, his policies in the Middle East are either aligned with Israel’s or dependent on Netanyahu’s cooperation to work.

Both Obama and Netanyahu want the Israel-Egypt peace agreement to hold. Both need to ensure the civil war in Syria does not spiral out of control, as the cross-border salvos in theGolan Heights have indicated in the past few days. Both prefer repressive West-friendly dictators in the region over Islamist gains.

And, of course, both want to box in Iran on its nuclear ambitions. So far Netanyahu has reluctantly toed the US line on “giving sanctions a chance,” toning down his rhetoric about launching an attack. The last thing the White House needs is a sulking Israeli premier priming his cohorts in Washington to undermine US policy.

A sliver of hope for Netanyahu’s opponents is that a disgruntled US president might still take limited revenge, turning the tables by interfering in the Israeli elections due in January. He could back more moderate challengers such as Olmert or Tzipi Livni, if they choose to run and start to look credible.

But even that would be a big gamble.

The evidence shows that, whatever the makeup of the next Israeli governing coalition, it will espouse policies little different from the current one. That simply reflects the lurch rightwards among Israeli voters, as indicated in a poll this month showing that 80 percent now believe it is impossible to make peace with the Palestinians.

In fact, given the mood in Israel, an obvious attempt by Obama to side with one of Netanyahu’s opponents might actually harm their prospects for success. Netanyahu has already demonstrated to Israelis that he can defeat the US president in a staring contest. Many Israelis are likely to conclude that no one is better placed to keep an unsympathetic Obama in check in his second term.

Faced with a popular consensus in Israel and political backing in the US Congress for a hard line with the Palestinians, Obama is an unlikely champion of the peace process – and even of the Palestinians’ current lowly ambition to win observer status at the United Nations. A vote on this matter is currently threatened for 29 November, with the Palestinian Authority’s President Mahmoud Abbas apparently hoping that the anniversary of the 1947 UN partition plan for Palestine will provide emotional resonance.

Meanwhile, all Israel’s main parties are battling for the large pool of right-wing votes. Shelly Yacimovich, leader of the opposition Labor party, last week denied her party was “left-wing,” in a sign of how dirty that word has become in Israel. She has studiously avoided mentioning the Palestinians or diplomatic issues.

And the great new hope of Israeli politics, former TV star Yair Lapid, has rapidly come to sound like a Netanyahu-lite. Last week he publicly opposed giving up even the Palestinian parts of East Jerusalem, arguing that the Palestinians could be browbeaten into surrendering their putative capital (“Lapid: If Israel stands firm Palestinians will give up on East Jerusalem,” Haaretz, 8 November).

The reality is that the White House is stuck with an Israeli government, with or without Netanyahu, that rejects an agreement with the Palestinians. As violence flares again in Gaza — as occurred in the run-up to the last Israeli election — it looks disturbingly like four more years of the same.