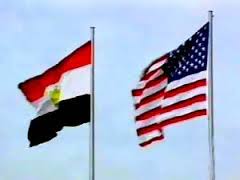 Regime change whether by war and occupation or via a military coup seems to be entrenched in what passes as Western-style “democracy”.

And no matter how persuasive their spin doctors may be to distance themselves from pursuit of selective policies reeking of hypocritical dual standards, very few people seem to be convinced.

Egypt is the latest example where duplicity has yet again been exposed as a cardinal tenet underpinning Western hegemony.

The sad reality is that people of this great country have paid a huge price to remind themselves and the world that sovereignty and independence is a costly commodity.

To simply view the current disaster following the toppling of Egypt’s first democratic president elected by majority of voters as a “conflict” between the military and the Muslim Brotherhood without factoring in other players would be misguided.

These players are not idle bystanders. They have a very direct role in shaping Egypt’s future as indeed they’ve had in its past. Their commitment is far removed from any goals that ordinary Egyptians may identify with and thus not reflective of the popular mood opposed to dictatorship.

On the one hand you have the Muslim Brotherhood and arraigned against it are a host of domestic and foreign powers. Apart from the United States, foremost in this asymmetrical equation is Israel, followed by Saudi Arabia, Kuwait and the Gulf kingdoms.

As amazing as it may sound to some, the reality is that these Arab client-states of the West have a vested interest in ensuring that no political power ever accrues to any formation of any Islamic Movement. It explains the haste whereby these unelected oligarchies rewarded General Sisi and his Supreme Council of Armed Forces with pledges of billions of dollars.

Without delving into history to determine colonial legacy that forcefully reshaped the Arabian Peninsula into arbitrary pockets of so-called nation-states, the reality today is that each one of these regimes remain illegitimate.

Their lack of democratic credentials and the fact that some of them have been bestowed with artificial “monarchs” have for decades been overlooked by the West since their utility derives from “oil and stability”. These monarchies provide an unlimited energy lifeline and in a bizarre way remain bulwarks of security for Zionist Israel.

For the American government, Israel has always been a prized strategic asset able to function as a nuclear armed regional watchdog to keep potential African/Arab/Muslim “troublemakers” a/k/a “terrorists” in check.

It is therefore not surprising that the Mubarak-era coup plotters who are now back in effective control of all levers of power in Egypt, use the same dehumanizing language to justify their brutal massacre of anti-coup protesters.

What is surprising though is the degree of confidence displayed by the army in undertaking a bloody route that not only surpasses Syria’s ruthless Assad regime, but also removes any semblance of rule of law. It suggests that the generals remain unperturbed about the possibility of any negative fallout that may be detrimental to their cause giving rise to widespread speculation that the Obama administration is firmly on their side.

This perception is further fuelled by the fact that notwithstanding a clear understanding that the forcible removal of President Morsi and his detention by the army is by all accounts a coup, the American government has refused to acknowledge it as such. In addition, unlike its hostile posture against Syria, Obama has failed to red-line the military usurpers.

General Sisi must be pretty smug with the idea that despite stealing a revolution and letting loose his armed thugs on peaceful protesters, the United States continues funding his army and propagates the false notion as Secretary of State Kerry has done, that business will continue as usual.

After all, America’s most strategic asset Israel has unashamedly embraced the coup and in celebrating the fall of the Muslim Brotherhood, has reasserted its role in encasing the region in a military structure which protects Western oil supplies. This region, according to a US State Department analysis in 1945, contained “one of the greatest material prizes in world history”: oil.

Egypt’s military is the second largest recipient of US aid. Israel of course leads the pack of beneficiaries by being in receipt of more military and civilian aid than any other client-state of the United States.

History records that within a decade after its illegal birth, in 1956, the Zionist regime was directly involved alongside Britain and France in a military and imperialist adventure to overthrow President Nasser, Egypt’s charismatic nationalist leader. His “crime” in the eyes of the West was for daring to nationalize the Suez Canal thereby shutting a vital artery for oil tankers bound for the West.

Sisi has placed Egypt back on an imperial track and in defiance of the country’s constitution which was democratically approved during Morsi’s short-lived tenure, ignited civil strife and an unpredictable future of horror. In the process America’s credibility has yet again been placed on the line.