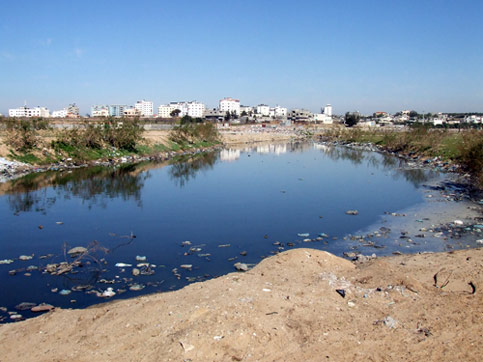 Richard Falk, a UN special rapporteur on Palestine, has used a new report on corporate complicity with the Israeli occupation to sound the alarm over how Israel is blocking Palestinians from access to their rightful share of water resources. Falk says Israel must halt the demolition of water collection facilities on the pretext that they operate without valid permits.

The Israeli blockade of Gaza has exacerbated water scarcity and the lack of adequate sanitation facilities. Delays and restrictions on the entry of materials through the Israeli-controlled Kerem Shalom crossing have stalled a number of water and sanitation infrastructure projects.

The Gaza Strip is almost completely reliant for its water on the underlying coastal aquifer. Israel uses a disproportionate share of water from this source for its own benefit.

Pollution caused by raw sewage and rising seawater infiltration make 90 percent of the water unfit for human consumption. Last year, the UN reported that the coastal aquifer could become unusable in 2016 with the deterioration becoming irreversible by 2020.

Polluted tap water has forced many families to buy expensive water from external vendors. As a result, the average consumption in Gaza has dropped to between 70 and 90 liters per person per day, which is below the 100 liters recommended by the World Health Organization.

Israel also blocks Gaza’s inhabitants from using water from Wadi Gaza, a natural stream that originates in the Hebron mountains and flows to the Mediterranean Sea.

Palestinians also lose water resources through Israel’s demolition of “illegal” water collection facilities and as a result of deep-water drilling activities by Israeli water companies. In addition, Falk received reports that Palestinian springs have been taken over by settlers and fenced off.

The unequal distribution of water resources has been sustained by the Joint Water Committee (JWC), which oversees and authorizes water projects in the occupied West Bank. Israel has used its veto power in the JWC to constrain the development of water infrastructure for Palestinian communities, particularly in Area C of the West Bank. Area C is a zone comprising more than 60 percent of the West Bank, which is under full Israeli political and military control.

All Palestinian water projects located in Area C need to obtain approval from the Israeli Civil Administration — the body overseeing Israel’s occupation of the West Bank — in addition to the JWC’s approval.

Meanwhile, Israeli authorities profit from the occupation by treating almost 21 percent of sewage from the West Bank in facilities inside Israel. Those facilities are paid for by Palestinian tax revenues withheld by Israel. The treated wastewater is then reused for the exclusive benefit of the Israeli agricultural sector.

Falk criticizes the Palestinian Authority for not having been able to uphold Palestinian water rights and to embrace the right to develop water and sanitation facilities. Support from international donors for ad hoc solutions, such as financing desalination plants and sanitation facilities to meet the immediate needs of the Palestinian population, must go hand-in-hand with pressure on Israel to end its discriminatory policies.