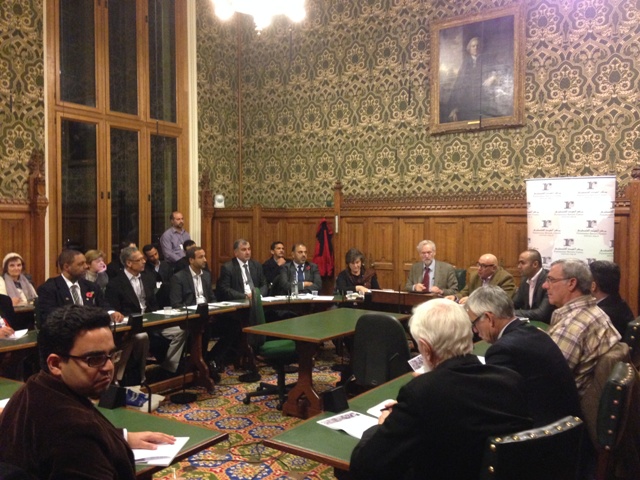 A number of Houses of commons and lords’ apologized to the Palestinian people over the Balfour declaration and its impact on the Palestinian people  The apology came during a meeting organized by Palestinian Return Centre (PRC) to mark the 96th anniversary of Balfour Declaration at the Houses of common Monday, 4th of November 2013.
The meeting discussed the progress and achievements of the international campaign, “Britain, it’s time to apologies” launched by PRC in 2012.

Member of Parliament, Jeremy Corbyn, apologized sincerely for what he described as the historical mistake by Britain. He called on the British government to redeem its mistake and its ongoing impact.  Jeremy’s apology was echoed by Liberal Democrats MP David Ward who also called on the British government to help solve the problem and end the plight of the Palestinian people. Ward said that Britain had no right to issue a declaration which caused the displacement of millions of Palestinians.

Amongst those who apologised includes Baroness Jenny Tonge who emphasized the implementation of Palestinian rights especially the right of return which is guaranteed by international law. She stated that Balfour declaration produced an Israeli apartheid state and that the support of Britain to such a state should end. Lord Nazir Ahmed, also amongst the panelists, called on the British government to apologize for its role in the ethnic cleansing and exile of the Palestine people. He also asked Britain to apologise to those countries who suffered under Britain’s colonial past.

Speakers at the seminar also included the Palestinian Ambassador, Prof. Manuel Hassassian, who expressed his deep frustration over the current stance of the British government over Palestine. He deplored the government’s position which is unhelpful and counterproductive. He called on the British government to play a more significant role. He also added that British policy towards Palestine didn’t change substantively.

Head of Media department at PRC and the spokesperson of, “Britain, it’s time to apologize” international campaign stated that more British politicians are joining the campaign. Mr. Habeeb added that other organizations are also joining and that various projects will be launched over the coming months to obtain further support from British people and masses of European and non-European states.