The Unconquerable Heroes who Live in Gaza

The Gaza strip is a piece of land 41 km long and 6-12 km wide, with a total area of 365 square kilometres. Situated on the Eastern coast of the Mediterranean sea, it has a strong population of 1, 8 million people, making it one of the most densely populated areas in the world as well as having the sixth highest population growth rate in the world, with a rate of 3,2% per year. This piece of land is also the world’s largest open air prison, being under complete siege by land, air and sea since 2007. Its neighbours, Israel and Egypt, have been complicit in the persistent and debilitating strangulation of the people of Gaza, with the limitation of all basic goods from entering the region.

Before going to Gaza, I had few expectations from the people and the land. What I was greeted with, from the very moment we crossed the Rafah crossing into Gaza was beyond anything any of us in our delegation could imagine! The hospitality of the people of Gaza engulfed us as we were literally treated like royalty, instantly respected and welcomed as long lost brothers and sisters. It was over-whelming to connect so instantly with these people and we soon came to realise that these qualities of magnanimous warmth, sincerity and unrelenting courage were qualities that resided in the hearts of every person living in besieged Gaza. Having travelled to many countries before this, there was no doubt that this land and its people were going to easily steal my heart- a feat accomplished easily within a few hours of me being in the region.

Travelling around, the effects of the 6 year long siege were evident everywhere. From the pitch black streets due to fuel shortages, the long queues at the fuel stations, the children playing in the streets of a freezing cold winter with no shoes and the various ten or more member families living in one bedroom houses. The frank poverty and devastation from being cut off from every basic amenity was a reality for many living in Gaza. However, there is something different in the way Gazans dealt with the situation which separated them from any other people in the world- it is their unconquerable will and hope to live. The bravery, determination to overcome, will to persevere and resilience in surviving is truly what heroes are made of. I remember Professor Norman Finkelstein saying once, “Soon it will not be said that the Palestinians fight like heroes, but that heroes fight like Palestinians.” The people of Gaza are the epitome of what he so rightfully observed.

Not only do they live under resistance, but they excel! Just a couple of weeks before we arrived, Gaza had suffered from massive floods. We would drive by homes and see water marks halfway up the front doors from where the water levels had reached. Cars lay abandoned in the streets as they had stopped working after being completely submerged by the flood water. We visited a lady who had made her living by selling chickens, nearly all of whom had been drowned in the floods. She had lost the only income for her family and yet we were welcomed into her home while she courageously showed us around and told us of her struggles. Their spirit and faith in doing the best in every situation meted out to them was intoxicating!

The economic output per capita has fallen by 40 percent of 1994 levels and 95 percent of Gaza’s 3,900 industrial businesses are closed or have suspended work-the other five percent are operating at 20 to 50 percent of capacity-costing between 100,000 and 120,000 jobs. Despite all this, the youth of Gaza are determined to be educated and even with an unemployment rate of 45,2 % I was inspired to find many of the youth still attending university and obtaining degrees. I am convinced that any other government having to deal with such unruly circumstances would have given up by now, but from my experiences with the local people of Gaza as well as from what I could observe the democratically elected government, Hamas, is doing a sterling job in trying to uplift Gaza. While the media might have us believe them to be a terrorist organisation, I do not know any terrorists who would invest so much energy and time into not only ruling but leading their people under such difficult circumstances. While we were visiting some of the more needy houses in Gaza, a house displaying the flags of Fatah (the opposition party) came into view. We watched in admiration as the relief group taking us around, despite having ties to Hamas, still aided the family. The boundaries of politics obviously do not extend to humanity and this was one of the invaluable lessons learnt whilst in Gaza.

It was also admirable to see the innovative side of Gazans coming through despite the siege. Throughout our stay we enjoyed the most delicious juice, manufactured by a factory within Gaza, which started producing its own products so that drinks wouldn’t have to be imported from Israel- the nation imposing such an inhumane siege on the population. Traces of their ingenuity shone through in all their actions to survive. 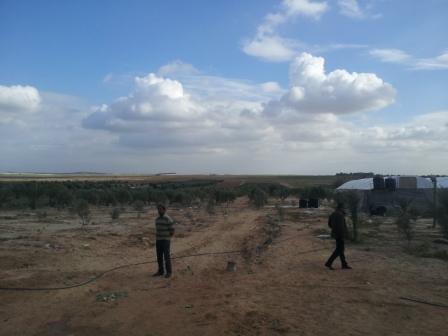 While it was unbelievably and at times overwhelmingly, sad to see an entire population limited in their everyday activities in every form, I took a lot more back from the spirit and hearts of the people of Gaza. They have reformed the way I see my life full of comforts back in South Africa. The resilience of the Gazans, their will to live, their indomitable spirit, their “never say die” attitude and their magnanimity towards visitors is more powerful than all the struggles of a siege the Zionists can muster.