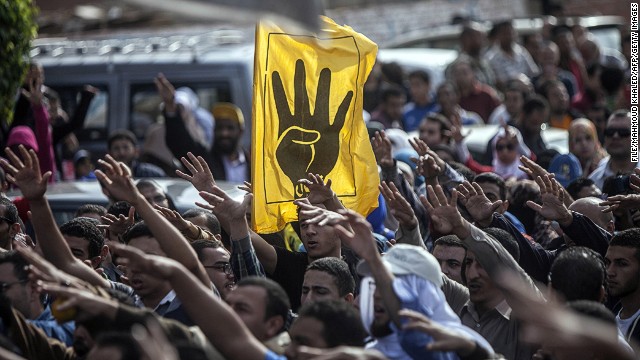 The Media Review Network finds the sentencing to death of 528 supporters of the Muslim Brotherhood in Egypt as an affront to the intelligence of all humanity. In the words of Professor Richard Falk: “……………………………..this is not a territorial crime; it is a crime against people…………………………  Our humanity calls for a response to outrages of this dimension, this scale”.

The latest act of defiance against the rule of law and the undermining  of all democratic principles by the illegal military rulers in Egypt opposes all logic and can only be described as state terrorism.

Egypt has joined the “Group of Preferred States”. Afghanistan, Guantanamo, Iraq and Palestine are such terrains where international law does not apply and crimes against humanity are carried out with exemption, latitude and immunity.

The Media Review Network calls on the international community to ensure that no safe haven exists for perpetrators of crimes against humanity and war criminals in Egypt.

Our Minister of State Security, Mr. Siyabonga Cwele clandestinely visited Cairo recently. This was ostensibly to lend support to the illegal coup in Cairo. In light of this and the latest atrocities in Egypt, the MRN urges the Government to stop all interactions with Cairo and to summon the Egyptian Ambassador to explain his Government’s actions.