The Teenage Martyrs of Palestine 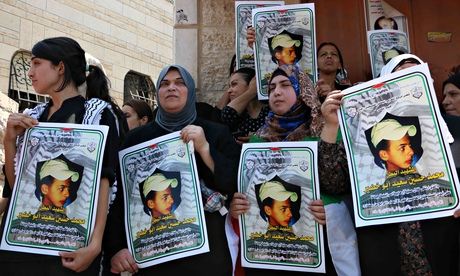 The reporting by mainstream media of the events unfolding in Israel and Palestine over the last four weeks has been abominable. The usual pro-Israeli rhetoric and inflammatory word usage against what has factually happened has depicted a grossly distorted picture of the situation on the ground. It is only through social networking sites and connecting with people who are actually living under the Israeli occupation that one quickly becomes aware of the true circumstances surrounding the escalation of tensions in the region. Some analysts deem this as the beginning of the Third Intifada.

Muhammed Abu Khdeir, a 16 year old Palestinian teenager, was abducted in Eastern Occupied Jerusalem on his way to the early morning prayers on the 2nd of July. He was beaten, had gasoline poured into his mouth and all over his body while he was still alive and set alight; left to die in the most gruesome way. The autopsy was carried out at the Israeli Abu Kabir Forensic Institute in the presence of an official Palestinian pathologist, Dr. Sabir al-Aloul and these findings confirmed. Thereafter, his body was dumped in a forest built on the ashes of his Palestinian forefathers who had suffered similar brutality and paid the price for being Arab- the ashes of the Deir Yassin Massacre. In the interest of presenting a non-biased perspective as well as correlating how the media would have referred to the culprits had they been Arab, this attack and murder was carried out by suspected Jewish terrorists. The illegal Israeli settlers, occupying Palestinian land deemed illegal under the fourth Geneva Convention, who are allegedly responsible were taken into custody.

Muhammed was abducted and murdered as part of a greater campaign of revenge and collective punishment which has been perpetrated by the Zionist state of Israel. In response to 3 Israeli settler teenagers who were found dead after having gone missing for 3 weeks, a huge offensive was launched against the Palestinian populations in Gaza and the West Bank. These have included home demolitions, mass detentions, beatings and deadly shootings. Despite the fact that no group has claimed responsibility for the kidnappings of the 3 teenagers, and Hamas, who has been singled out as the culprits, has categorically denied these accusations. Notwithstanding this, Zionist Israel has launched an offensive sparing no woman, child or civilian.

What has happened to Muhammed is not an isolated incident. Official statistics from the Ministry of Information in Ramallah have revealed that 1,518 Palestinian children were killed by Israel’s occupation forces from the outbreak of the second Intifada in September 2000 up to April 2013. That’s the equivalent of one Palestinian child killed by Israel every 3 days for almost 13 years. Why have we not seen Barack Obama expressing his condolences every 3 days for the Palestinian mothers who have lost their children? Why do we not know their names and faces, splayed across every news outlet? Is it because a Palestinian child holds less value than that of an Israeli one?

The report also pointed out that 9,000 Palestinians under the age of 18 have been arrested since the end of September 2000. Almost two hundred and fifty Palestinian minors are being held in prison by Israel; 47 of them are children under 16 years of age. The media should be reporting these facts. The lynching of 16 year old Muhammed Abu Khdeir may have sparked the beginning of what could be the Third Intifada.

However, it is the institutionalised racist policies of Apartheid, continuous Palestinian home demolitions and illegal settler establishments, mass killings and the arrest without trial of Palestinians, including children, that has been ongoing for the past 66 years that will maintain the Palestinians spirit of resistance.

From time to time unsubstantiated reports concocted by the media and funded by governments would have us believe that Hamas was responsible for the kidnapping and killing of the three settler teenagers. The ultimate aim of this dishonourable and mendacious reporting is to discredit Hamas. What else can be said of ‘intellectuals’ and ‘writers’ who claim that Palestinians who fight for their honour, freedom, and basic human rights are ‘terrorists’ while the illegal settler killers of Muhammed Abu Khdeir and other unknown Palestinians, who came from eastern Europe, to steal a land that belongs not to them are represented as the forces of ‘freedom’, ‘justice’ and ‘enlightenment’.