French freedom of speech a myth 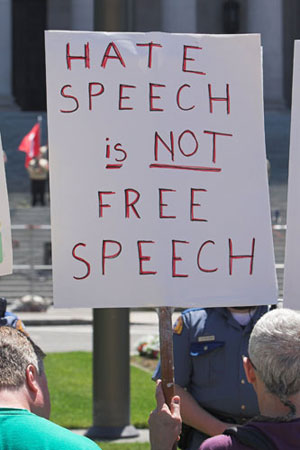 Years of taunting, insulting and humiliating caricatures of the revered prophet Muhammad (pbuh) and immigrants, Blacks and Muslims by the satirical Charlie Hebdo magazine has resulted in what the French authorities have long warned against, an explosion of violence leading to the tragic deaths and injuries of over 20 persons.

President Hollande described this attack as an assault on secular French values, democracy, freedom of speech and expression, condemning ‘Islamic terrorists’ for perpetrating these heinous crimes.

But the bloodbath in Paris has nothing to do with freedom of speech, nor with Islam.

The deliberate provocation of six million Muslims in France and the 1.8 billion Muslims worldwide through constant racial vulgarities and indignities directed at the Prophet and Islam under the guise of freedom of speech is reckless and utterly reprehensible. Surely French ‘values’ and democracy does not confer it the freedom to denigrate and desecrate a Prophet who is so deeply cherished by all Muslims.

The perception that the French media is free to publish anything as a fundamental right without restrictions is a myth. For example French law does not permit the publication of material that promotes the use of drugs; hatred based on race or gender; insult the national flag and national anthem, or question the holocaust. Dieudonné M’Bala  a French comedian and satirist – was convicted and fined in France for describing Holocaust remembrance as “memorial pornography”.

In fact in 2008, one of Charlie Hebdo’s famous cartoonists, Siné, wrote a short note citing a news item that former French President Nicolas Sarkozy’s son Jean was going to convert to Judaism to marry the heiress of a prosperous appliance chain. Siné added the comment, “He’ll go far, this lad.” For that, Siné was fired on grounds of “anti-Semitism”.

When Sarkozy was the Interior Minister he ordered the firing of the director of Paris Match  — because he had published photos of his wife Cécilia Sarkozy with another man in New York. He even had rapper ‘Joestarr’ song criticising him censored.

The French court banned the French magazine Closer from re-publishing or distributing photographs in France of the Duchess of Cambridge, Princess Kate, sunbathing topless. But Muslim women have been ostracised and forbidden to wear the headscarves in educational institutions and face ridicule, court arrest and fines for wearing the face veil in public.

The ‘Quennele’ hand sign has been described as anti-establishment and anti-Zionist by French youth and famous football players (e.g. Anelka). It stoked serious controversy in France since first being used by anti-establishment comedian Dieudonné M’Bala M’Bala in 2005.  M’Bala has been barred from many theatres and convicted many times for his ‘freedom of speech’.

Protests by Muslims to express their abhorrence at blasphemous films, cartoons or even in support of the Palestinians massacred in Gaza have had their planned rallies banned, the first country in the world to do so. This has led to the further marginalisation of France’s Muslim and African minorities in the political and social life of the nation and increasing anti-Muslim bigotry and hate-crimes.

Many have seen through the hypocrisy of a nation outraged at the murder of 10 journalists, and yet is complicit with Israel in the murder of 17 journalists along with 2300 men, women and children (500), in Gaza, just over a year ago.

France’s support for the ‘war on terror’, the invasion and occupation of Afghanistan, Iraq, Syria, Yemen and its pivotal role in Libya and Mali, resulting in the deaths of hundreds of thousands of innocent Muslims, adds to the grievance  and disaffection  of local Muslims. The humiliation, suffering and injustices felt for their brethren makes for a common cause.

There is undoubtedly a political motivation underlying the vile, racist and vulgar cartoons lampooning Prophet Muhammed (pbuh) fuelling the climate of Islamophobia. Claims by defenders of Charlie Hebdo that other religious icons have been vilified disregard the fact that the targeting of Muslims have been more systematic and consistent. Instead of maligning the rich and powerful in society, they satirise the weak and marginalised, adding flames to an already volatile fire.

When Muslims are mocked and insulted and their prophet whom they love more than themselves dishonoured in an appalling way under the guise of ‘freedom of speech’ is a factor that explains the explosion of violent fury in Paris. Freedom of speech does not mean the freedom to defame or malign a prophet.

There has been a near-universal condemnation by the Muslim leadership of the attack on Charlie Hebdo , urging Muslims to follow the example of Prophet Muhammed (pbuh) who never retaliated against those who personally insulted him, nor did he not seek vengeance on them.

Perhaps the French and their European and Western counterparts need to imbibe Islamic values of tolerance, respect and honour.