The humanitarian face of Israel 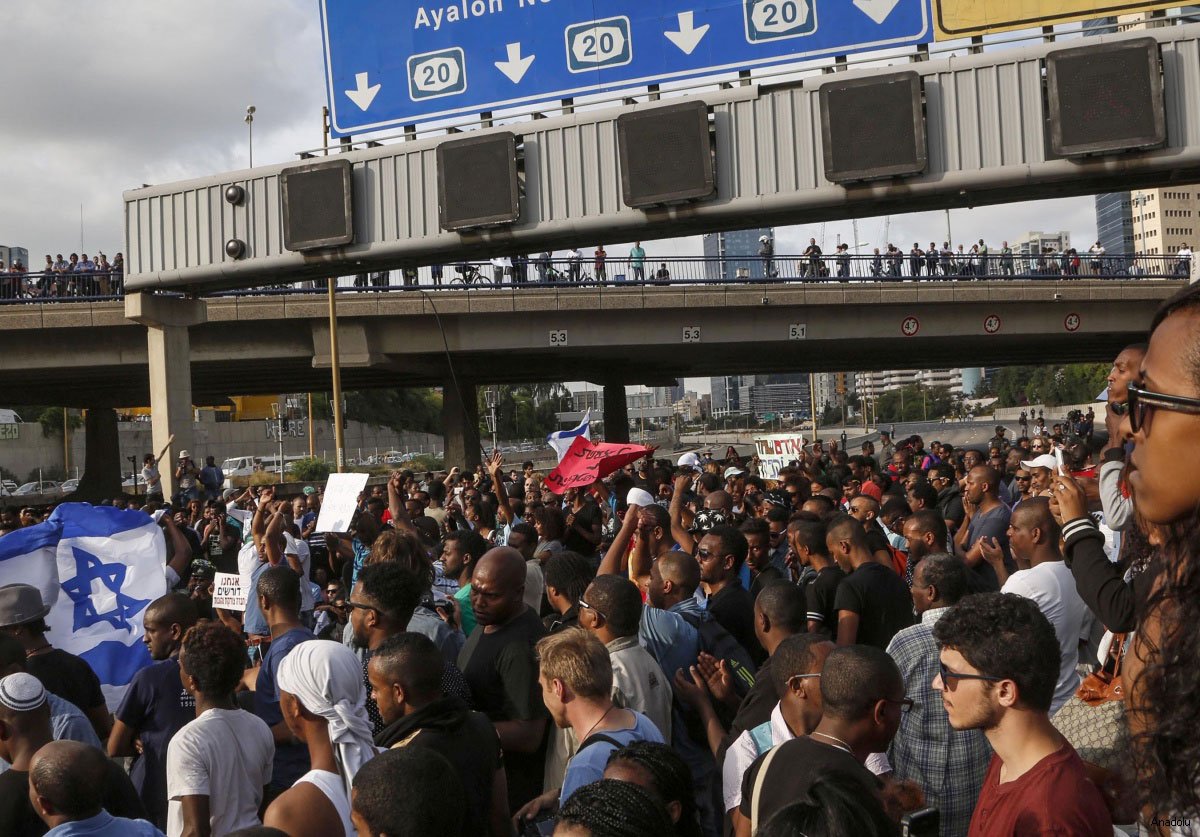 It is not the youth of Shufat this time!

On my way to the Old City of Jerusalem from my neighbourhood of Shufat at the end of April, I saw that the French Hill junction had been closed and that there were burning tires, gas canisters, and ambulances all around. But this time, it was not the youth of Shufat who had rebelled – as they had last year against the burning alive of the youngster Muhammad Abu Khdeir. This time it was the Ethiopian Jews protesting against Israeli racism towards their own community. Thousands had taken to the streets of Jerusalem and Tel Aviv to express an anger spreading like wildfire, sparked by video footage of two white Israeli policemen beating an Ethiopian-Israeli soldier in uniform.

During the memorial ceremony marking the death of approximately 4,000 Ethiopian Jews who perished while waiting in transit camps to be airlifted to Israel in the early 1980’s, Israeli President Reuven Rivlin and Israeli Prime Minister Benjamin Netanyahu expressed their sympathies and apologies to the Ethiopian Jewish community: “We heard a wounded community who voiced their heartfelt cries of feelings of discrimination, racism, insult and lack of response… Israel erred in the integration and treatment of the Ethiopian community along the years… We didn’t see, we didn’t act correctly, we didn’t listen enough.”

There has never been such a heartfelt ending whenever the residents of Jerusalem or the Arab citizens of Israel have protested or demonstrated against Israeli racism against their communities. Instead, they are often arrested, shot or killed in reaction – we will not even speak of the Palestinians of the West Bank and Gaza!

Not long after the devastating earthquake struck Nepal at the end of April, the Israeli army sent an emergency team to assist in the rescue effort on behalf of the earthquake victims. In fact, this was not the first time that Israel had stepped forward by offering aid to the victims of natural disasters. The Israelis like to do so, taking pictures of black and brown women and children receiving help under the blue and white Israeli flag. Such pictures not only look nice when they appear in the popular media and scientific conferences, but lend credibility to Israel’s claim to “protect human rights”.

A less clear-cut and more interesting story involves the efforts of the Israeli government to evacuate the babies of gay Israeli men born to surrogate Indian mothers in Nepal. The Western media coverage of this story was even wider than the coverage of the thousands of victims of the earthquake, and for the most part, the fanfare trumpeted Israel’s respect for gay rights. We saw white gay Israeli men arriving at Ben Gurion Airport with their newborn babies, expressing how proud they are to be Israeli and how grateful they are for all of the efforts Israel had made to bring their children back (the brown-skinned surrogate mothers, on the other hand, were left behind in the disaster zone to fend for themselves many miles from their homes in India).

Israeli law allows homosexual couples to have children born by a foreign surrogate mother, and Indian mothers provided a natural target due to the vast numbers desperate enough to sell their bodies for cash (the women travelled to Nepal to give birth because Indian laws prevent the selling of surrogates). The fee for renting the uterus of an impoverished brown surrogate mother willing to undertake the physical and psychological burdens and risks of fertilisation, pregnancy, and birth – with the goal of giving life to the genetic material of (in this instance) white Jewish men – is 80 per cent less than the cost of paying for an American surrogate mother. On average, a woman from Nepal is paid $30,000, while an American woman would be paid $150,000.

This story forms the backdrop to the rumour leaked by Israeli police and circulated virally in official and social media that Mohammed Abu Khdeir was killed at the hands of Palestinians because he was gay. It was not until Palestinian shopkeepers provided film footage identifying the real Israeli kidnappers that these false claims were defeated. But the rumour was created not only to protect the Israeli perpetrators and to deflect guilt onto the Palestinian community, but to create a discursive dichotomy between a homophobic Palestinian community and a homophillic (and thus progressive) Israeli community. Don’t the Israeli’s allow a gay pride parade in occupied Jerusalem and provide refuge for members of the Palestinian LGBTQ community in an effort to pink wash the occupation and its the denial of Palestinian refugee rights?

Western media often gift-wraps the false humanitarian face of Israel; an Israel that contributes to disaster relief and defends the rights of homosexuals to distract attention from its military occupation of Palestine. But just like the little boy in the story of “The Emperor’s New Clothes”, who saw the emperor naked while everyone else admired his illusionary garments, we Palestinians cannot be misled by sugar-coating the ugly face of the Occupation. The humanitarian mask does not absolve Israel from the injustices and manmade disasters it has systematically created for the Palestinian people over 67 years of occupation.

Samah Jabr is a psychiatrist and psychotherapist in Jerusalem, who cares about the wellbeing of her community, beyond issues of mental illness. She writes regularly on mental health in occupied Palestine.

Note: This item was updated at 14.04 BST on May 28, 2015 to correct the average price for surrogate mothers in Nepal vs America.