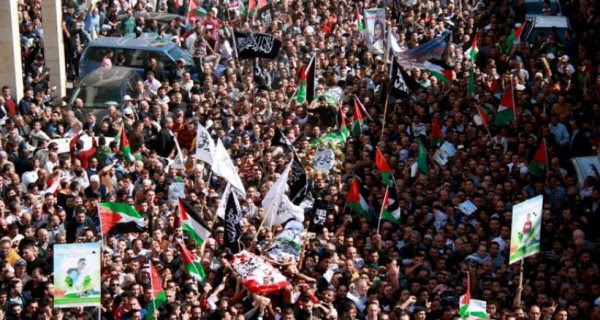 Since the start of October, Palestinians have been taking part in mass popular resistance against Israeli settler colonialism and apartheid.

On Saturday, tens of thousands of people joined a huge demonstration in al-Khalil (Hebron) and similarly large demonstrations took place in Jerusalem, Ramallah, Bethlehem and across Palestine. Palestinians continue to take mass action on an almost daily basis in cities, towns and villages throughout historic Palestine.

This uprising is led by a generation of fearless young Palestinian Davids who are no longer intimidated by the brutality of the Israeli Goliath and who are asserting their right to self-determination and freedom. It comes as a response to the escalation of Israel’s criminal attacks on and ethnic cleansing of Palestinians.

Israel’s repression of this ongoing uprising has been brutal. Israel has killed 74 Palestinians, mostly unarmed protesters and bystanders, including 15 children and a pregnant woman. More than 2,000 civilians have been shot with live and rubber coated bullets. More than 1,350 Palestinians have been arrested.

See our full update for a selection of photos and updates about the ongoing popular resistance.

Take action in solidarity with the Palestinian popular resistance: