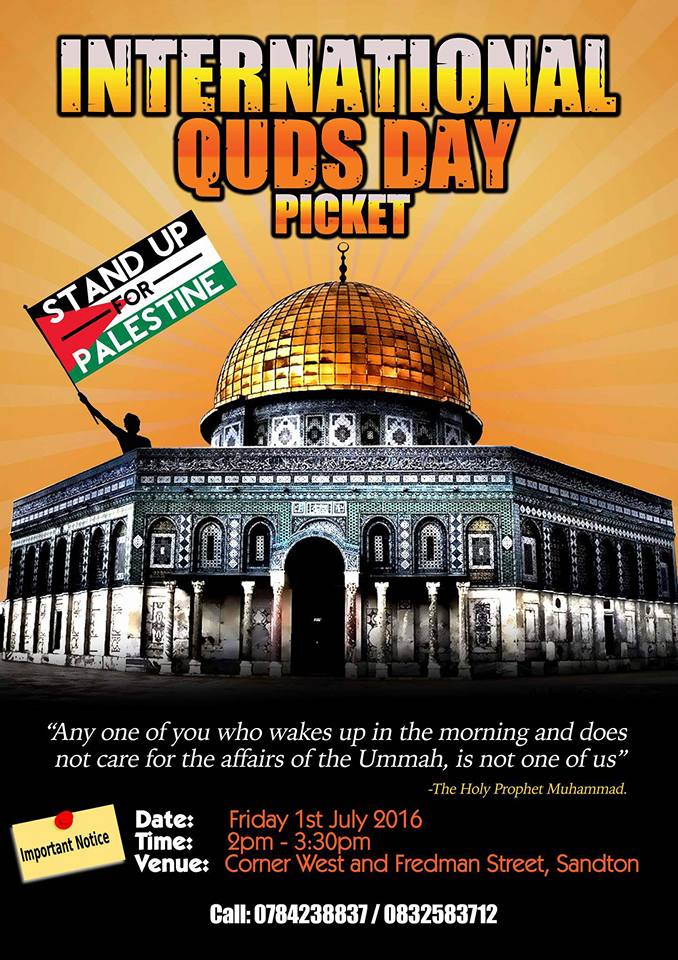 Al-Quds, is the Arabic name for the city of Jerusalem. The  Al-Aqsa Mosque,  the third holiest site in Islam after Masjid-Al-Haram in Mecca and The Prophet’s Mosque, Masjid Al-Nabawi in Medina, is situated in Al-Quds.
International Al-Quds Day is observed annually on the last Friday of Ramadan, the ninth month of the Islamic calendar. Demonstrations are held all over the African continent, the Middle East, Britain, Europe, Canada, USA and Asia, where people show their support for the oppressed of the world, in particular Palestine.
Since 1979, it’s been the duty of every Muslim and non-Muslim, every Christian, every Jew, every single human being, to rally in solidarity against Israel for the liberation of Jerusalem and the Palestinian people from Israeli oppression on Al-Quds Day.
Since 1947, Israel has repeatedly violated the Geneva Conventions by:

Israel defies international law and hundreds of U.N. resolutions by:

In Solidarity with International Al Quds Day, a picket will be held on Friday 1 July 2016. We will  join the International Solidarity movement in calling for a free Palestine. Speakers will include representatives of the Palestinian Solidarity Alliance, The Women’s boat to Gaza, Islamic Centre for Africa Trust and the Media Review Network.