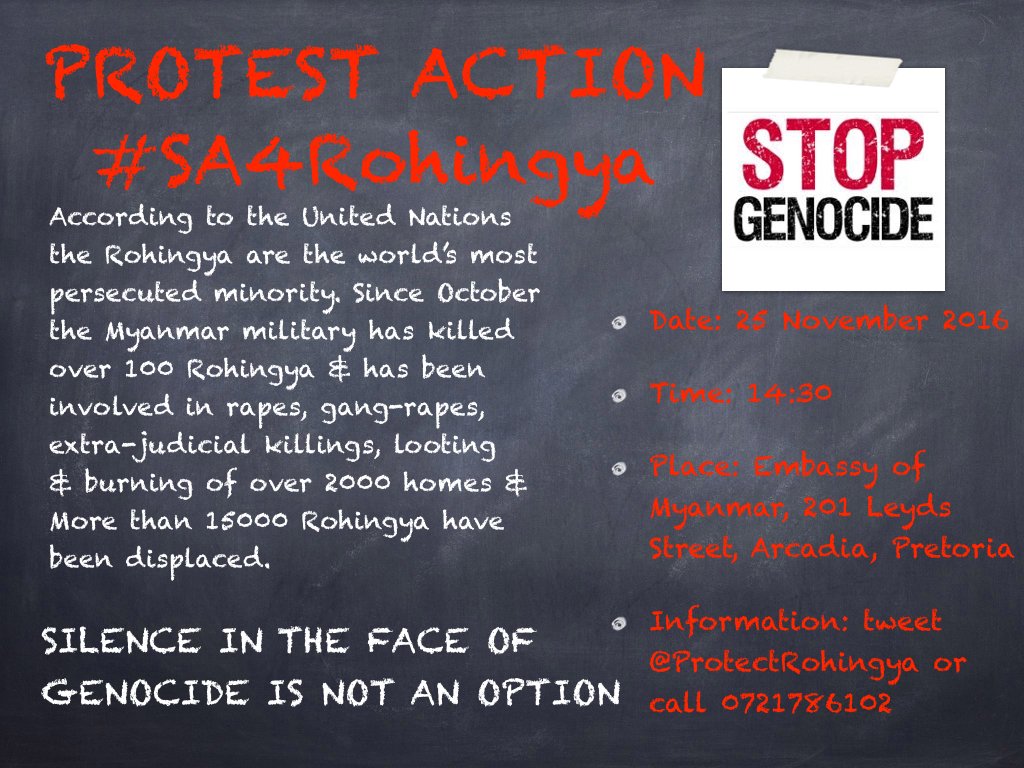 As much as there may be merit in complaints that media in general has not provided the Rohingya tragedy adequate coverage, the same argument can be made against human rights organizations for their lackluster approach to the crisis.

In the light of an intensified campaign of ethnic cleansing dubbed as a “clearance operation”, the urgency to prevent the Myanmar military from carrying out unspeakable atrocities on the long persecuted Rohingya minority is undisputed.

Despite this, South Africa’s “Protect the Rohingya” movement, led by Advocate Shabnam Mayet, has doggedly since 2012, been at the forefront advocating and providing awareness of their oppression.

In the latest press statement issued by Mayet, she reveals that according to the UN the Rohingya in Myanmar are the world’s most persecuted minority.

“Human rights violations against the Rohingya have been recorded since the late 1970’s and in 1982 the Burmese military junta revoked their citizenship. They are denied their rights to education, land, freedom of movement, employment and to marry without state permission. They are also subjected to both forced labour and forced sterilisation.”

The massacres of Rohingya in 2012 was symptomatic of a long and oppressive history of discrimination and left most Rohingya inside Myanmar confined to IDP camps, under the worst possible conditions. The persecution has forced thousands of Rohingya to flee on rickety boats risking their lives on the open seas.

The Myanmar government has blamed the Rohingya for the attacks on 3 border posts on October 9 this year. Despite the lack of any proof there has been an increase in military presence in northern Rakhine State along Myanmar’s frontier with Bangladesh.

The military has locked down the district, with majority Rohingya residents, shutting out aid workers, independent observers and journalists.  400 people have been killed up to now. The military has engaged in extra-judicial killings, the arbitrary arrests and torture of hundreds of civilians and burned down more than 2000 homes. The military has also engaged in air-strikes on Rohingya villages.

More than 30000 people have been displaced and humanitarian operations that had been providing food, cash, and nutrition to more than 150000 vulnerable people have been suspended for the last 40 days. More than 3000 children have not received their regular treatment for severe acute malnutrition leaving them in a dire health situation.

More than 150 rapes and gang-rapes of Rohingya women have been reported since the violence escalated last month with victims including minors.  Rohingya women and children were gunned down while attempting to cross the river marking the border with Bangladesh. Bangladesh has closed its  borders to those fleeing the military atrocities and has engaged in pushback of refugees.

“State Counsellor Aung San Suu Kyi has recently stated that the government is responding to the situation based on the principle of the rule of law. Yet I am unaware of any efforts on the part of the government to look into the allegations of human rights violations. It would appear, on the contrary, that the government has mostly responded with a blanket denial, she said, adding that security forces must not be given carte blanche to step up their operations.” – UN envoy on human rights in Myanmar, Yanghee Lee,

Mayet’s plea is emphatic: “Given the atrocities committed against Rohingya, can we as South Africans having lived through a racist and brutal oppressive regime, ignore our duty to stand up for those still living under apartheid?”

Burma seems oblivious to public concerns, for its genocidal tactics continue regardless. Notwithstanding such arrogance and contempt, silence is not an option.

For the oppressed Rohingya, voices such as Mayet’s and “Protect the Rohingya”, offer a glimmer of hope. Friday the 25th of November will see an important advance as hundreds are expected to mobilize in solidarity at a public protest outside Myanmar’s embassy in Pretoria.

The message is clear: Halt the genocide!
Iqbal Jassat