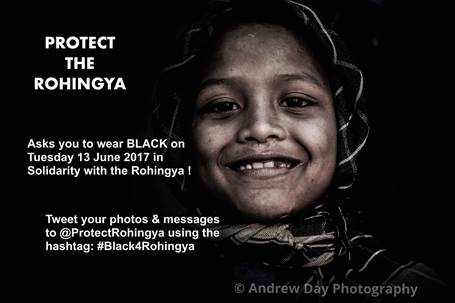 Protect the Rohingya calls for the end of the Rohingya genocide! Join our campaign by wearing BLACK in solidarity on Tuesday, 13 June 2017 and remember to tweet your photos and messages of solidarity to us: @ProtectRohingya using the Hashtag: #Black4Rohingya

The Rohingya have been described as the world’s most persecuted minority by the United Nations. They live in Arakan State, Myanmar where they have been denied citizenship, freedom of movement, access to education and health services. They have been subject inter alia to land confiscations, arbitrary arrests, forced steralisation, extortion, torture, rape and collective punishment. Their citizenship was revoked by the state in 1982.

More recently since 2012 the brutality against them has only been exacerbated by the state’s unwillingness to punish right-wing nationalists who spew hatred against them, address its apartheid policies and keep its security forces in check.

Their persecution has forced over 168 000 Rohingya to flee Myanmar in the last five years. Many desperately seeking security in Bangladesh and Malaysia. Despite , Aung San Suu Kyi’s  NLD led government coming to power in 2016, the circumstances and condition of the Rohingya  has only deteriorated.

The military has been engaged in a violent crackdown against the Rohingya since last October when border guard police posts on the Burma- Bangladesh border were attacked and a few police officers were killed. Human rights violations include executions, arrests, beatings, torture, forced relocations, blocking of humanitarian aid, burning of homes and businesses, and the mass rape of Rohingya women.

Almost 2000 Rohingya homes and buildings have been burnt while 75 000 refugees have fled to Bangladesh and thousands remain internally displaced.

The Myanmar government disputes the allegations, charactering the actions of its forces as anti-terrorism “clearing operations.” It also claims that eyewitness accounts have been fabricated (while denying outside observers, including foreign journalists and even a United Nations contingent from the Office of Genocide Prevention, meaningful access to the region.

The international community has failed to take any real action to stop the violence against the Rohingya. Few ASEAN countries are offering practical assistance and resettlement programs to Rohingya refugees.

As South Africans having lived through a racist and brutal oppressive regime it is our duty to stand against apartheid wherever it exists. Burma should NOT be allowed to continue its genocide of the Rohingya population.

We urge the people of conscience the world over will join our campaign and spread the word about the plight of the Rohingya 13th of June 2017.