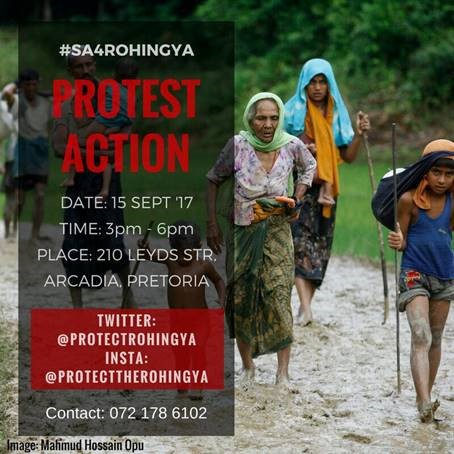 Since 25 August this year, the Myanmar military has been carrying out unspeakable and abominable atrocities on the long persecuted Rohingya minority under the guise of yet another ‘clearance operation’. Protect the Rohingya calls on you to join the march to Parliament from Kaizergracht in Cape Town on 13 September or protest at the Embassy of the Union of Myanmar in Pretoria, on Friday 15 September and take a stand against the genocide of the Rohingya people.

According to the UN the Rohingya in Myanmar are the world’s most persecuted minority. Human rights violations against the Rohingya have been recorded since the late 1970’s and in 1982 the Burmese military junta revoked their citizenship. They are denied their rights to education, land, freedom of movement, employment and to marry without state permission. They are also subjected to both forced labour and forced sterilisation.

The latest violence which erupted on August 25, 300 000 Rohingya Muslims are reported to have fled to neighbouring Bangladesh, while more than a 100000 remain internally displaced. More than 40 villages have been burnt to the ground and more than 400 000 Rohingya are in need of urgent humanitarian aid.

Myanmar officials blame the Arakan Rohingya Salvation Army (ARSA) for the violence, however fleeing Rohingya civilians maintain that a campaign of arson, rape and killings by the Myanmar army is aimed at forcing them out of the country.  In the most recent violence, more than 2000 people have been killed.

As South African’s having lived through a racist and brutal oppressive regime it is our duty to stand up for those still living under apartheid. Myanmar should NOT be allowed to continue this genocide of Rohingya.

South Africans will register our protest and dismay by marching to Parliament from Kaizergracht in Cape Town on 13 September or protesting at the Embassy of the Union of Myanmar in Pretoria, on Friday 15 September.

We demand that the South African Government to intervene and take a decisive stand against Myanmar for these human rights violations which have continued for so many decades by withdrawing our diplomatic staff from Myanmar and to expel the Embassy of the Union of Myanmar from South Africa.

We call for the end of atrocities and human rights violations at hands of Myanmar military, unfettered access to affected areas by humanitarian aid organisations and most importantly the reinstatement of citizenship , movement and all the rights to Rohingya.

We call for the implementation of recommendations of Rakine Commission Report and that the United Nations Fact Finding Mission be given access to affected areas to carry out their investigation.
We demand that those responsible for human rights violations be investigated and held accountable.