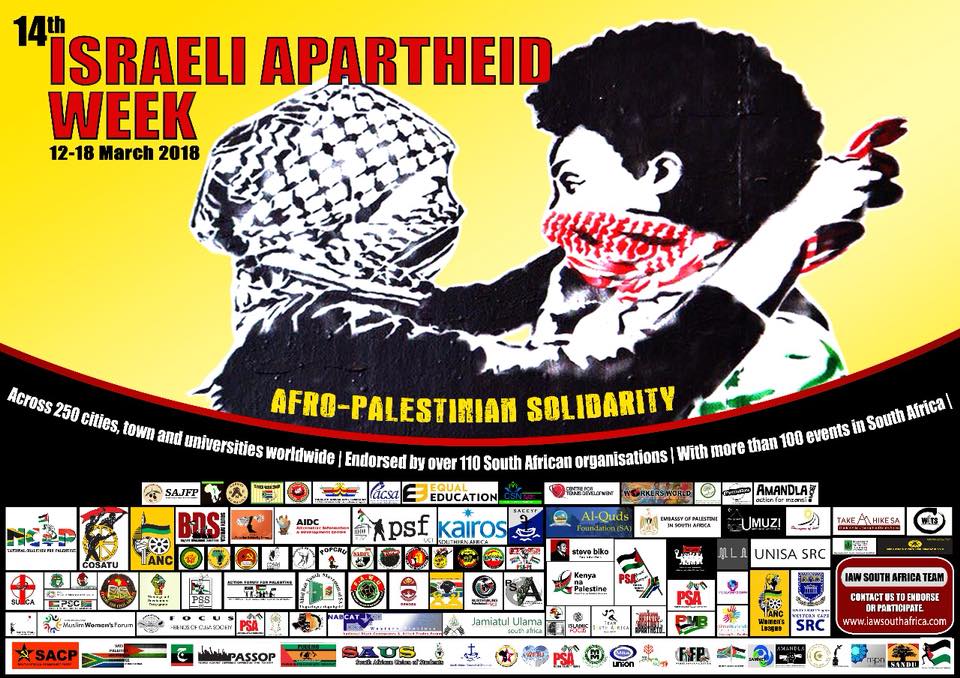 As the Israeli Apartheid Week (IAW) reaches South African shores on March 12th following 250 cities around the globe, this iniquitous racist Israeli system that has poisoned Palestinians for 70 years has now afflicted African refugees as well.

Thousands of African refugees, mainly from Sudan and Eritrea, have been placed in concentration camps in the Negev desert called the Holot prison. Another 40,000 plus languish in dilapidated slums on the outskirts of Tel Aviv facing daily insults and humiliation and awaiting expulsion.

This has been the plight of the 10 million Palestinian Christians and Muslims for the past 70 years, forced to live in refugee camps in neighbouring countries and deprived of the normal human rights to live  in dignity at the place of their birth.

Journalist and author David Hirst vividly describes life in refugee camps as  ‘ the squalid sheds, their roofs of tin or corrugated iron weighted down with stones to stop them blowing away; the walls of squashed petrol cans, a few plants growing in rusty tins, the clouds of flies, the stink of animals and excrement; the long lines of women queuing up for rice or kerosene, or flour; above all the faces of women, worn and vacant, exhausted by years of carrying water and heavy loads, of children, wide-eyed and dirty, of men who push past sullenly, saying nothing”.

Life of a Palestinian (and it is for any refugee whether African, Rohingya, Syrian) refugee means a life of perpetual degradation. You are forced to live in narrow rooms, with leaky roofs, partitioned with cardboard boxes. In each lives one family no matter how many people it contained. In some cases people have lived huddled together in the same room for fifteen years.

For the undernourished children there was nowhere to play; for the men, no work. Farmers who once worked their own lands it was a choice between unemployment or selling lottery tickets; women waited in queues begging for handfuls of rice and sugar; and children standing bare feet trying to sell chewing-gum to passing motorists.’

African refugees living in this forlorn and insecure environment , and experiencing the humiliation of constant interference by ruthless police and military forces and a hostile population, is what most Black South Africans under Apartheid rule can easily empathise with.

They are “a cancer in our body”, a “sanitation hazard”, ”a threat to the social fabric of society … national security [and the] identity and existence [of the] Jewish and democratic state”. As “infiltrators”, they should be “encourage[d] … to leave” and “lock[ed] … up to make their lives miserable”.

These repugnant rants by Israeli government ministers incite hate campaigns and lynch mobs against African refugees. White mobs have repeatedly assaulted Africans in the streets encouraged by Jewish leaders calling them vile names and hurling racist slurs. Ironically, the majority of these Israelis are themselves immigrants from Russia, Ukraine, the USA and France, responsible for the theft of Palestinian lands.

Israel is a signatory to the United Nations Convention on Refugees and is therefore legally obligated to offer asylum to the African refugees. Israel has no problem fast-tracking citizenship for White settlers placing them on illegally confiscated Palestinian lands.

The deafening silence of the African Union (AU) or at best, the muted response by African countries, is shameful. Two of its member states, Uganda and Rwanda, confirmed by UNHCR, have in fact assisted Israel in its deportation of the hapless African refugees for financial compensation.

The treatment meted out to the tormented African refugees in violation of International Law exposes Israel’s claim that justifies its crimes against the Palestinian people under the guise of “security”.

As the IAW campaign radiates throughout the world, Israel will, just as pre-1994 South Africa did, find it increasingly difficult to conceal and defend its irrefutable Apartheid policies.