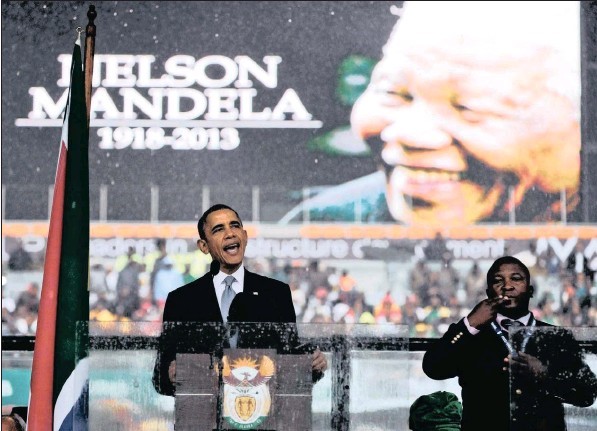 As a South African, I am truly ashamed that the former US president will be honouring the man whose struggles have allowed me to live freely today

THE Nelson Mandela Foundation has invited Barack Obama to deliver the speech for Madiba’s centenary celebrations this year, on July 17. Despite being approached by multiple organisations to review this decision, the foundation has stood by its invitation.

WHENEVER visiting a foreign country, upon enquiry by a local as to where I come from, the response of “South Africa” elicits a knee-jerk, over-enthusiastic response of “Nelson Mandela!”

Often followed by a ramble in a language I don’t understand, the huge smiles and positive flowing of affirmations confirm that Madiba has left a global legacy that will be difficult to match.

He is synonymous with some of the greatest ideals of our time – justice, forgiveness, tolerance, peace, unity and reconciliation.

This year marks the centenary celebration of the birth of this remarkable leader. His birth should be celebrated by people who not only understand, but attempt to emulate the manner in which he lived and led. Why then the Nelson Mandela Foundation has chosen Barack Obama to do this, is an unfathomable mystery. If we move past the glossy, fake image of struggle and reform that supposedly accompanied him being the first black president of the US, Obama was in truth the smiling face of war and murder. Barack Obama bombed seven countries during his six years in office.

Awarded the Nobel Peace Prize mere months into his tenure, it is significant today that many of his own supporters believe the Nobel was “a mistake”. He received the prize in the hope that he would be fundamentally different from his predecessor, George W Bush. Yet, paradoxically, Obama was even more interventionist than Bush.

The military data of 2016, for example, shows that the US dropped more than 26 000 bombs in seven countries resulting in the deaths of 3 797 people, a number most organisations agree is grossly underestimated.

Obama embraced drone attacks with alacrity, authorising 506 known strikes, compared to the 50 strikes under Bush. He initiated “targeted killings” of even US citizens, a prime example of this being Anwar al-Awlaki and his 16-yearold son, who were assassinated by targeted drones in Yemen. Drones are nothing short of assassination machines used to kill people without due process. In his seminal work, Crimes Against Humanity, Geoffrey Robertson asserts that the killing of Awlaki violated the 5th Amendment of the US Constitution. By dramatically boosting US weapon exports, Obama also distinguished himself as the greatest arms exporter since World War II.

Mandela was a man who lived with a conviction for truth and justice so strong that he was able to not only change our country, but the world too. Besides their skin colour, Obama and Mandela have very little in common. Professor Ndebele from the Nelson Mandela Foundation defended the choice of inviting Obama as the official speaker by stating: “In an era defined by worsening tensions between people in which the spectre of exclusion and intolerance across the world seems to become normalised, the messages of president Obama, like those of Madiba, must be given space.”

I read this sentence multiple times over, but was unable to extract any logical sense from it.

“Only an organisation that is completely naive of the true legacy that Obama has left behind would find it acceptable for his views to be given space, especially on the very special occasion of a centenary commemoration.

Obama’s presidency was littered with lies – from the lie of promising to withdraw all US troops in Afghanistan, to the lie of closing down Guantanamo Bay – a detention centre where men lay imprisoned and tortured indefinitely, without trial or representation.

I had read about countless human rights violations during Obama’s reign, but the stories that always affected me the most were those to do with his regime’s complete disregard for health-care rights. In 2015, the Doctors without Borders (MSF) Trauma centre in Kunduz, Afghanistan was hit by bombings in the early hours of the morning by Obama’s military personnel.

It has been unequivocally reaffirmed by MSF that all parties to the conflict, including in Kabul and Washington, were clearly informed of the precise location of the facilities in Kunduz, however, the bombing persisted for more than 30 minutes.

Nine staff members were confirmed as killed, and countless others seriously injured. The MSF facility lay in ruins. A medical doctor myself, I am astounded at the level of disregard for the basic principles to the commitment of life doctors implicated in the CIA torture programme, exposed under Obama’s leadership, displayed.

The CIA torture report was compiled and released in 2012, and revealed the heavy hand medical personnel played in many of the, illegal prisons the US has in foreign countries and locally.

Dr Vincent Lacopino, medical director at Physicians for Human Rights echoed my sentiments when he remarked: “As Physicians for Human Rights has established, health professionals were central to the CIA’s torture programme. They designed the methods, medically monitored torture victims, engaged in unethical research and experimentation, and helped the CIA legitimise practices any responsible medical professional would consider beyond the pale.”

Indeed, a man whose leadership facilitated the dirtying of such a noble profession does not deserve the space to address any crowd.

Obama’s legacy will be defined as more war than peace. Instead of being threatened with arrest and trial at The Hague, or face accountability for his country’s atrocious crimes, the Nelson Mandela Foundation is preparing to tribute Obama in the same light as Madiba’s legacy.

As a South African, I am truly ashamed that Obama will be honouring the man whose struggles have allowed me to live freely today, and dare I say it, if Madiba were alive today and presented with these same facts he’d be wholly ashamed too.

Aayesha J Soni is a medical doctor and member of the Media Review Network (MRN).