WHICH WAY LIBYA? HOW THE AFRICAN UNION AND THE UNITED NATIONS HAVE FAILED LIBYA 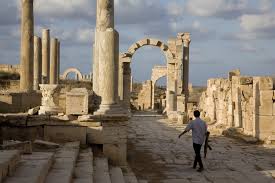 In 1967, Colonel Gaddafi inherited one of the poorest nations in Africa. However, by the time he was assassinated, Gaddafi had turned Libya into Africa’s wealthiest nation. Libya had the highest GDP per capita and life expectancy on the continent, fewer people lived below the poverty line than the Netherlands.

After NATO’S intervention in 2011, Libya is now a failed state and its economy is in shambles. As the government’s control slips through their fingers and into the hands of the militia, oil production has all but stopped.

The militias variously local, tribal, regional, Islamist or criminal, that have plagued Libya since NATO’s intervention, have recently lined up into two warring factions. Libya now has two governments, both with their own Prime Minister, parliament and army.

On one side, in the West of the country, Islamist-allied militias took over control of the capital Tripoli and other cities and set up their own government, chasing away a parliament that was elected over the summer. On the other side, in the East of the Country, the “legitimate” government dominated by anti-Islamist politicians, exiled 1,200 kilometres away in Tobruk, no longer governs anything.

The fall of Gaddafi’s administration has created all the country’s worst-case scenarios: Western embassies have all left, the South of the country has become a haven for terrorists, and the Northern coast a centre of migrant trafficking. Egypt, Algeria and Tunisia have all closed their borders with Libya. This anarchy occurs amidst a backdrop of widespread rape, assassinations and torture that completes the picture of a state that has utterly and completely failed.

America is clearly fed up with the two inept governments in Libya and is now backing a third force: long-time CIA asset, General Khalifa Hafter, who aims to set himself up as Libya’s new dictator. Hafter, who broke with Gaddafi in the 1980s and lived for years in Langley, Virginia, close to the CIA’s headquarters, where he was trained by the CIA, has taken part in numerous American regime-change efforts, including the aborted attempt to overthrow Gadafi in 1996.

In 1991 the New York Times reported that Hafter may have been one of “600 Libyan soldiers trained by American intelligence officials in sabotage and other guerrilla skill, to fit  neatly into the Reagan Administration’s eagerness to topple Colonel Qaddafi”.

Perhaps, Gaddafi’s greatest crime, in the eyes of NATO, was his desire to put the interests of local labour above foreign capital and his quest for a strong and truly United States of Africa. In fact, in August 2011, President Obama confiscated $30 billion from Libya’s Central Bank, which Gaddafi had earmarked for the establishment of the African IMF and African Central Bank.

In 2011, the West’s objective was clearly not to help the Libyan people, who already had the highest standard of living in Africa, but to oust Gaddafi, install a puppet regime, and gain control of Libya’s natural resources.

For over 40 years, Gaddafi promoted economic democracy and used the nationalized oil wealth to sustain progressive social welfare programs for all Libyans. Under Gaddafi’s rule, Libyans enjoyed not only free health-care and free education, but also free electricity and interest-free loans. Now thanks to NATO’s intervention the health-care sector is on the verge of collapse as thousands of Filipino health workers flee the country, institutions of higher education across the East of the country are shut down, and black outs are a common occurrence in once thriving Tripoli.

One group that has suffered immensely from NATO’s bombing campaign is the female population. Unlike many other Arab nations, women in Gaddafi’s Libya had the right to education, hold jobs, divorce, hold property and have an income. The United Nations Human Rights Council praised Gaddafi for his promotion of women’s rights.

When the colonel seized power in 1969, few women went to university. Today, more than half of Libya’s university students are women. One of the first laws Gaddafi passed in 1970 was an equal pay for equal work law.

Nowadays, the new “democratic” Libyan regime is clamping down on women’s rights. The new ruling tribes are tied to traditions that are strongly patriarchal. Also, the chaotic nature of post-intervention Libyan politics has allowed free reign to extremist Islamic forces that see gender equality as a Western perversion.

Eight years ago, NATO declared that the mission in Libya had been “one of the most successful in NATO history.” Truth is, Western interventions have produced nothing but colossal failures in Libya, Iraq, and Syria. Lest we forget, prior to western military involvement in these three nations, they were the most modern and secular states in the Middle East and North Africa with the highest regional women’s rights and standards of living.

A decade of failed military expeditions in the Middle East has left the American people in trillions of dollars of debt. However, one group has benefited immensely from the costly and deadly wars: America’s Military-Industrial-Complex.

It is also important to mention that, the African Union should carry the burden of blame for NATO’s disastrous failure in Libya. Some African Union member countries who sat on the security council voted in favour of invoking article 7 of the UNSCR 1973 authorising the use of force against the Jamahiriya only to regret later as the bombing and destruction went on unabated. South Africa and Nigeria were sitting on the UNSC when Libya was being destroyed. Hence their complicity in the crime committed by NATO.

Today both the UN and AU have been passive observers to what is going on in Libya and are still doing nothing to assist the Libyan people to solve their problems. When we connect all the dots, one concludes that the type of leadership on the continent is toothless because it serves the interests of former colonial masters rather than its people.

Africa did not even provide a good account of its intent and strategy to the general public, as a result of which the AU position has been widely misunderstood, and the AU itself has suffered a crisis of leadership. Africa’s weakness has benefited nobody. The Libyan people, the new government and NATO are regretting that the African option was not pursued.

African leaders must be warned, this modus operandi in which a country’s infra-structure and economy is destroyed only to open the doors to neo-colonialism in the form of international aid, will visit  your country sooner rather than later.

As I write this article, military strongman General Khalifa Hafter has ordered his troops to invade the capital Tripoli. This comes amid calls for restraint by the UN Secretary General Antonio Guterrez.  Recently Khalifa visited Saudi Arabia and UAE, who are his main backers together with Egypt ostensibly to receive instructions from them.

With all this happening in Africa, the role of the African Union must be questioned, given the fact that Egyptian President Abdul Fataar al-Sisi is the current chair. He is obviously party to what is unfolding in Libya now. The hard questions that we need to raise include: “Where is the African Union leading us to? Can the people on the continent trust the current crop of leaders at the helm of the AU?

A few days ago, the AU cut a deal with NATO to corroborate on operationalizing the Africa Stand by Force. What kind of gobbledygook is that? Can we trust NATO who were the chief architects of the killing of Gaddafi and the destruction of Libya?