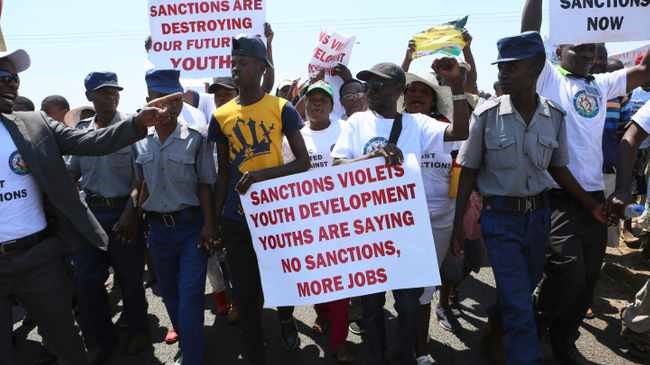 When the Zimbabwe government embarked on the compulsory acquisition of land, the United Kingdom which was then under the leadership of Prime Minister Tony Blair, reacted by imposing punitive sanctions and scrapping development aid that the country was receiving. They also turned what was a bilateral problem into a multilateral one when they asked the rest of the European Union (EU) to join the sanction bash on Zimbabwe. Also joining in on the side of the UK, were their overseas territories Canada, Australia, and New Zealand. It was very clear that the fight had turned nasty. It assumed a racial dimension within no time. Zimbabwe found itself on the receiving end being accused of disrespect for human rights and lack of respect for property rights among other things. The impasse quickly escalated into the biggest racial war of the century.

For lack of space, I will not go into defining sanctions and the different sanctions that could be implemented. It is, however, important to divide them into two categories: Heavy and Soft sanctions. What has been imposed on Zimbabwe are, indeed, heavy sanctions, punitive in nature and meant to kill. This is exactly what is happening now on the ground. People are dying of hunger and disease because of these inhuman sanctions’ management, all in the name of regime change. The truth is, there will be no change of government to be replaced by a puppet government in Harare.

On 25th October 2020, the Southern Africa Development Community (SADC) observed the Anti-Sanctions Solidarity Day with the Zimbabwean people. There are also very confusing messages coming from the same imperialist countries that imposed these sanctions. Are the sanctions to be lifted or not. They are trying to put up a facade by denying the effects of the sanctions. China and Russia both members of the United Nations Security Council (UNSC), have since denounced these sanctions. The exception here seems to be the imperialist countries, the USA and UK. These remain defiant and continue to heap blame on the government and the ruling ZANU-PF party for running down the economy of Zimbabwe. The USA, EU, and the UK and its overseas territories have all released statements on the eve of the “Anti-Sanctions day” to try and win sympathy of the people of Zimbabwe by denying that sanctions are to blame. Someone is lying somehow; on the ground the people of Zimbabwe are feeling the effects of the sanctions anyway. Why not have mercy on the common people who have nothing to do with politics or involved in decision making.

When these countries imposed the sanctions, they had reasons why, and obviously, their intended achievement. It was basically to warn other countries, especially in the SADC region, not to follow the Zimbabwe route. I am sure you are all familiar with this famous quote “Let us make Zimbabwe’s economy scream”. Countries like South Africa and Namibia who had just gotten their independence and had serious land reforms to undertake, were the intended targets. All SADC countries that fought imperialism and colonialism, were fighting for the land. Those of us who followed the discussions that were taking place at the Lancaster House in Britain, remember very well that the land issue was the cause of many stalemates at the talks.

Those unpatriotic individuals in our opposition parties who were in the forefront calling for these sanctions, have been left with egg on their faces. They had thought that they would soon be at state house as the ZANU-PF government would have been overthrown in no time. They had not studied the effects of sanctions elsewhere. In fact, sanctions strengthen the peoples resolve and to look at those who have imposed them as their enemies. There are many examples in support of this theory. Look at Cuba, Iran, and now Venezuela. Sanctions can also be the cause for the suspension of democracy and certainly, some civil rights. The moment you declare these immoral sanctions on a country, you have declared war. The United States and its allies must realize that they are undoing all the good work promoting human rights, democracy and many other civil liberties. Sanctions only served to hasten all that.

The shameful so-called “peace deals” that are currently going on in the Arabian Gulf countries have placed the USA and Zionist Israel in the spotlight of the bigotry of the imperialist west. Zimbabwe has suffered from the self-same prejudice and racism.

It was a shame to hear these representatives denying the existence of punitive sanctions that their countries have imposed on Zimbabwe. Zimbabwe needs the money to fund its development. Yes, we all should contribute to fighting corruption as a collective.

Any changes President Emmerson Mnangagwa is implementing in order to change the status quo will take time to bear fruit. The road ahead will be long and hard.

You cannot blame him alone when it comes to corruption. All of us should take the blame. The problem is people expect all this to happen in a day when it has taken many years to get to where we are in terms of corruption. I remember very well some years ago when Zambians used to say, “it is difficult to bribe the Zimbabwe Republic Police (ZRP) if you commit a crime in Zimbabwe”. I still believe that all is not lost in this fight against corruption.

Lastly, I call upon the USA in particular, to stop this blame game and undo the Zimbabwe Democracy and Economic Recovery Amendment Act which blocks Zimbabwe from accessing loans from the IMF and the World Bank that will unlock economic development for the country. Britain should also lead by example because Britain knows the truth about this whole issue. Certainly, some form of injustice was done to the people of Zimbabwe.

Do not play toxic politics here. People’s lives are in danger. Many Zimbabweans have lost their lives through direct and indirect effects of these sanctions.

The Western Imperialists and their domestic surrogates should stop lying to the people and for once speak the truth!

Zimbabweans must realise that they will always be vulnerable to economic sanctions if they rely on the “lethal generosity” of western aid. Africa must become totally self-reliant so that they leave a legacy which future generations will be proud of.