Colin Powell Not A Hero 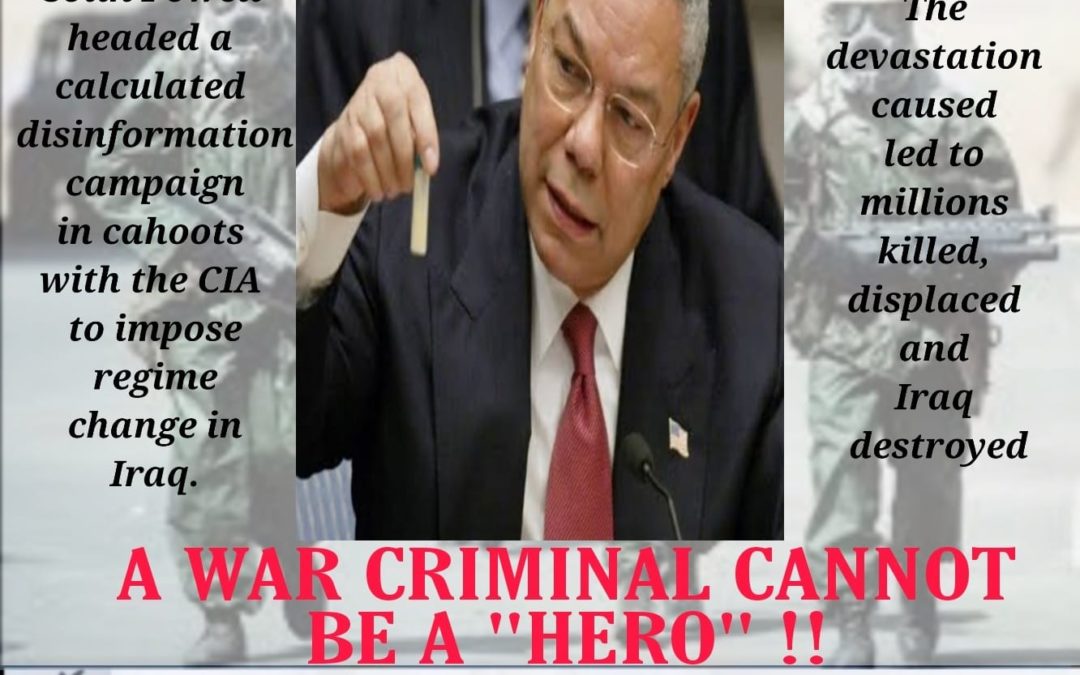 Will Colin Powell be remembered as America’s hero or as a war criminal?

Since his death a few days ago, there appears to be a rush to profile him as a warm-hearted family man who against all odds, rose to unimaginable heights within the US empire.

If the discourse on his life is selectively cherry picked by pro-American analysts, it is inevitable that Powell will be mourned as an unblemished leader worthy of being emulated.

And shockingly, apart from a few exceptions, many South African media platforms who have elicited comments on Powell ignored the most crucial aspect defining his enormous failure and guilt: weapons of mass destruction or WMD.

In other words to bring the issue of WMD into sharp focus and his central role in it, Colin Powell was the indisputable purveyor of lies that led to America’s destructive war on Iraq in 2003. A bloody war built on a pack of lies!

Attempts have been made since the claim of WMD was exposed as an elaborate plot of lies, to argue that it was “intelligence failure” in order to whitewash the entire scandal and to salvage Powell’s severely damaged reputation.

Pundits who subjected the narrative of “intelligence failure” to intense scrutiny, found that on the contrary, Powell was at the head of an extremely sophisticated campaign of disinformation. The objective was clear: regime change in Iraq.

The predetermined goal of a full blown war followed by invasion, occupation and regime change had nothing to do with WMD, but everything to do with America’s right-wing neocons’ goals in pursuit of eliminating Arab leaders viewed as impediments.

In the case of Iraq, Saddam Hussein’s usefulness as a faithful lackey had terminated and had to be replaced, even if thousands upon thousands would die in the process.

Selling the need for war on Iraq required deception. Powell was thus tasked as the chief deceiver whose lies about Saddam possessing WMD became the center piece of the CIA coordinated plot. The fiction of Iraq posing an imminent threat to American interests and security was sold to the public as well as the wider world.

That the false propaganda was successfully bought by US allies was no surprise. But shockingly and to the utter dismay of millions who poured into the streets of various capitals, mainstream media also bought into it.

Powell’s disgraceful display of fake vials purporting to be “evidence” of mountains of weapons of mass destruction possessed by Saddam Hussein, accelerated the hunger for war.

The British government led by Tony Blair was equally committed to the war on Iraq by George W Bush, despite knowing pretty well about the myth of WMD.

Reports subsequently emerged confirming Blair’s satanic role. The nature of America’s case for war was aptly summarized in the minutes of a meeting of senior ministers of the British government on July 23, 2002, the infamous “Downing Street Memo”, which observed: “Military action was now seen as inevitable. Bush wanted to remove Saddam, through military action, justified by the conjunction of terrorism and WMD. But the intelligence and facts were being fixed around the policy.”

Any fair reading of Powell’s central role would dispute the narrative that there was an “intelligence failure” nor would it withstand the slightest scrutiny.

It thus begs the question why Powell has  escaped censure if facts point out that top experts in their respective fields within the US intelligence community had correctly assessed that Iraq did not have WMD or ongoing WMD programs?

Though Powell and Donald Rumsfeld died without any accountability for the horrendous war crimes perpetrated, one hopes that George W. Bush,  Condoleezza Rice and all others who were the architects of America’s Illegal wars will face prosecution.