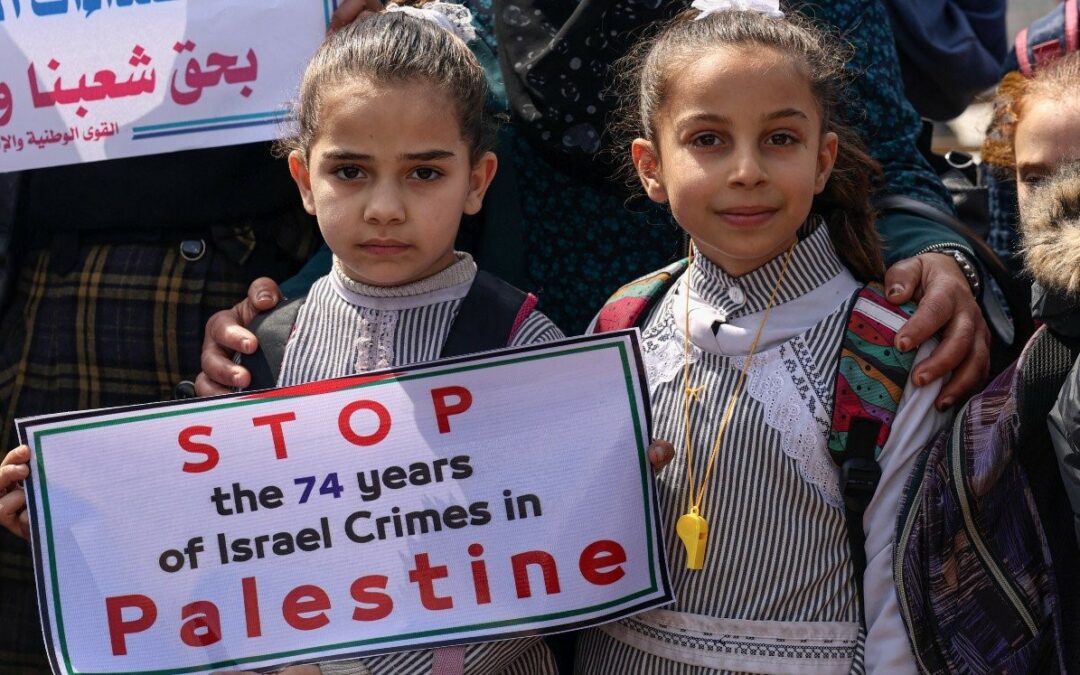 With global spotlight on Russia’s military offensive in Ukraine and dramatic pictures of civilians fleeing in droves to neighbouring countries, many across the world will be wondering how this tragedy will end, if at all.

Palestinians who have been on the receiving end of a similar drama for more than seven decades, will probably remind the world that unlike Ukraine’s population for whom Europe has opened borders, they are confronted with a military siege blocking all access to safety.

Having lost their country to foreign marauders and since 1948 been subject to the dictates of a military aggressor self-styled as Israel, Palestinians have experienced as they still do, the horrors of indiscriminate bombings being witnessed in Ukraine.

Indeed pictures of the devastation caused by Israel’s war on a civilian population within Palestine, particularly in the Occupied Gaza Strip, can easily be matched with those of Ukraine’s cities.

Sadly, while atrocities committed by Israel against Palestinians have been relentless, the settler colonial regime hasn’t met the same degree of outrage and dismay as is the case against Vladimir Putin.

America and NATO has mobilised humanitarian, economic and the most sophisticated military hardware to assist Ukraine. Sadly the same cannot be said for Palestine. In fact the converse is true. The same group of Western European nations led by the United States, have instead been the main backers of Israel.

South Africa’s muted response to Russia’s military attack has attracted a great deal of condemnation. However as is the case with the US/NATO politics of expediency, opposition to the ANC-led government’s stance on Russia, has been a shocking display of hypocrisy and double standards.

Political parties such as the Democratic Alliance (DA) and the African Christian Democratic Party (ACDP), are as traditional allies of Israel, known to be sheepishly silent on the Zionist regime’s brutal suppression of Palestinian human rights. Their cowardice regularly comes to the fore each time they vehemently oppose solidarity with Palestine by the African National Congress (ANC).

In fact as parliamentarians and serving in various portfolio committees, members of the DA and ACDP have yet to initiate any notice of motion in defense of Palestinian rights. Yet the DA has done so to support Ukraine. A bizarre set of circumstances leading one to question their dual standards.

I suppose a new challenge to the DA and the ACDP will emanate from a criminal complaint lodged with South Africa’s investigative and prosecutorial authorities by civil society organizations to probe and charge suspects for violations of the Foreign Military Assistance Act (FMAA).

Dubbed the “South African Zionist Terrorism Corridor Probe”, it is a comprehensive criminal docket based on sustainable and irrefutable evidence on SA nationals who have either previously served or are currently serving in Israel’s terrorist army, the IDF.

Military service in a foreign army by South African citizens is a criminal offence. The provisions of the Regulation of Foreign Military Assistance Act 15 of 1998 are clear: to do so as many SA citizens have by enlisting in Israel’s army is in violation of the act.

It does not end there. The suspects listed in the docket are also accused of contravening through their illegal military engagements in the IDF and by wilful and culpable acts of state terrorism, various SA laws.

The IDF is known to be committing war crimes. The atrocities it has and continues to commit against civilians, are extensively documented by UN agencies, particularly by the Special Rapporteur for the Occupied Palestinian Territories.

If Ukraine’s plight has shocked the world to realise that invasion and occupation is wrong and untenable, one wonders whether South Africa’s Rip van Winkles have awoken to the reality of millions of Palestinians illegally occupied by a nuclear settler colonial regime accused of ethnic cleansing and the crime of apartheid?

The “Zionist Terrorism Probe” is due to be unpacked at a press conference in a few days’ time. The applicants are Safoudien Bester, Martin Jansen and include the Palestinian Solidarity Campaign (PSC) and the Media Review Network (MRN).

In addition to testing the DA and ACDP’s claim to upholding law and order, it most certainly will also test the resolve of South African authorities to enforce justice.