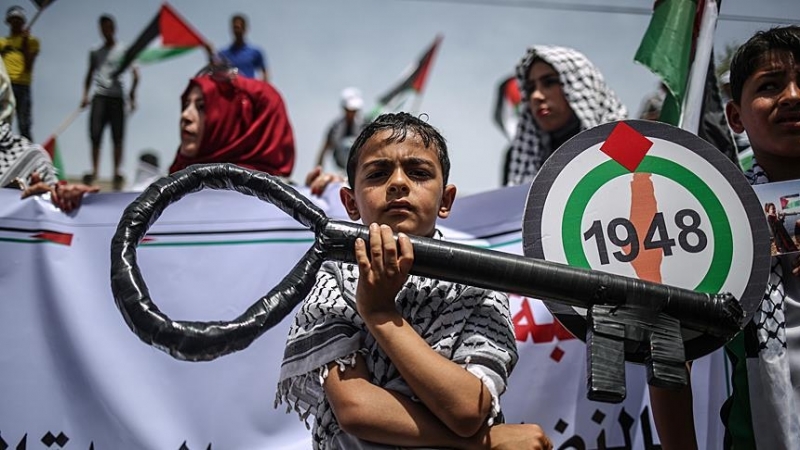 Nakba -what is it? It started with the abuse, derision, killing and forceful removal of 800 000 human beings from their homes and their land by the Israeli Zionist Regime aided by the Colonialists of the time. The Palestinians had lived on this land for 1000 years.

600 Villages were decimated and wiped out by the Zionists and thousands were killed and innocent women raped.

The tide is now turning as the Nakba has reached its turning point and the racist apartheid regime will face the onslaught of the Mazloom (the downtrodden) against the oppressors (the Zalims) murdering and maiming of 1000’s that has gone on for 74 years goaded by the fanciful, evil Balfour Declaration. This continuous catastrophe must stop and will be stopped by the youth and women  today.

It is not only the suffering of the people of Palestine that has gone on but the plundering and rape of the resources of the country by the Zionists as this was their ultimate goal so that the colonialists could benefit eventually. The 74 years of hell culminated during this Ramadan and the world witnessed the atrocities in Al Aqsa Masjid and its compounds wherein the attacks of the people took place for their only crime being remembering their Creator. The resistance is now from the youth and women who have for too long had enough.

The Nakba remembers the killing of  Shereen Abu Akleh whose only crime was to present the truth of the agonies of the Palestinians to the world as a sincere and honest journalist. It is tragic that her body could not be buried in peace as the Zionist soldiers saw to it. It does not matter, in the least, whether one is a Christian or Muslim, but no one stands against the cruel Zionist Regime even to present the Truth.

At the protest gathering of Dirco, Dr Feroz, the great promoter of the issues of the Palestinians, presented three succinct messages:

* The collaborators of the Zionist regime must also be aware that not only Israel will meet its doom but the likes of Jordan, Egypt and Saudi Arabia and all those who want to bring normalisation in Palestine, who are part of the Zionist Regime and Egypt who is strangling the life-blood of Palestinians, Muslims and Christians in Gaza, and including the Saudis will sink into the quick-sand of hell around them. The world is now waking up.

* All those who are staying quiet, including the South African Government should arise and realise what is going on in Palestine and do something for the sake of humanity which has been neglected for too long.

Latest posts by Abdool Aziz (see all)
Share this on WhatsApp