Two months in the home Israel has denied me 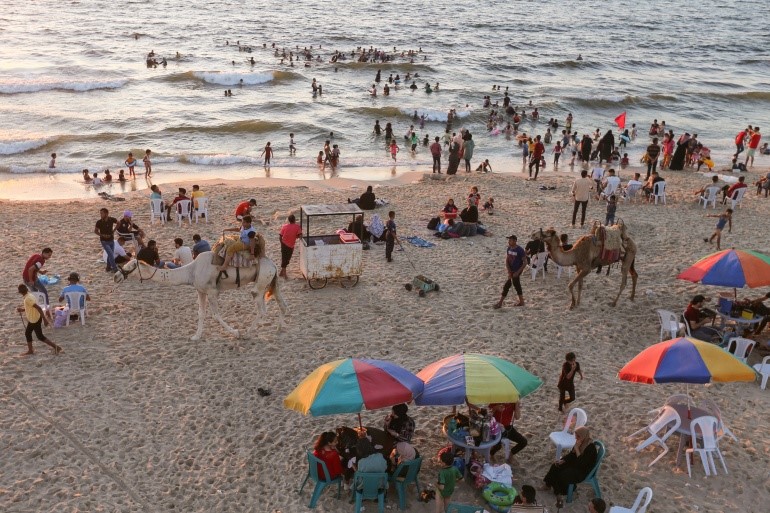 I returned to my homeland Palestine to see and experience what I had only heard in family stories.

Tears streamed down my cheeks as the bus crossed the Rafah border into the besieged Gaza Strip. After a gruelling two-and-half-day journey across the Sinai Desert in the summer heat, and a lifetime of waiting, I was finally home.

On the other side, I was greeted by my cousin and later the rest of my family, all of whom closely resemble me and my siblings.

It was the first time that I had met my family in my 23 years of life. Up to this point, our relationship was limited to the confines of WhatsApp voice messages and Skype calls on special occasions or during Israel’s routine military assaults on Gaza.

Like many Palestinians living in the diaspora, I had never had the honour to visit my homeland, Palestine, due to the brutal Israeli military occupation, and in the context of Gaza, the illegal Israeli siege, which deny our right of return.

However, like many Palestinians living in the diaspora, I feel that distance has only made my heart grow fonder of my land and my yearning for return has been at the forefront of my activism.

Since I was a child, growing up in the United States city of Seattle, my father made sure to ingrain into the psyche of me and my siblings the stories of his childhood, the legacy of my grandmother Zarefah, whose name I inherited, and the complex reality of what it means to be a Palestinian.

The story of my family is like the stories of many Palestinian families: a tale of dispossession, exile, separation, and struggle.

In 1948, my grandmother Zarefah was forcefully expelled along with her entire family from her home in Beit Daras, 30km (20 miles) north of Gaza, in the ethnic cleansing campaign known as Al Nakba, the catastrophe. Zionist militias had attacked the town, and, like many other Palestinian villages, towns and cities, had razed it to the ground. Its land now lies barren with only the ruins of Palestinian homes and two lonely pillars of Beit Daras’s mosque bearing witness that our ancestors once lived there and tended to their land as fellahin – peasants.

At just six years old, Zarefah and her family found refuge in Gaza’s Bureij camp, where she grew up, fell in love with my grandfather and raised a family of her own in the neighbouring Nuseirat camp.

As a result of the dispossession they suffered in the Nakba, Zarefah’s family fell into extreme poverty. She and her siblings were forced to work from a young age to help provide for their family and were unable to go to school. She lived and died illiterate, but she was the wisest person, my father always says.

Some 33 years after my grandmother passed away, I finally visited her resting place. I replayed in my mind the story of her sudden death, my grandfather, father, and his siblings taking her body to be buried amid the chaos of the Intifada. The Israelis had imposed curfews, confining people to their homes and banning gatherings. Leaving home and gathering to bury a loved one required a permit from the Israeli military.

As I retraced their steps between the scattered and worn tombstones, I recalled my father telling me how Israeli soldiers fired live ammunition to disperse the large crowd of mourners who had come to bid farewell to their beloved Zarefah. Two children were shot in the legs that night. Even the right to mourn a loved one in peace was denied to the Palestinians.

During my stay in Gaza, I also visited my father’s refugee camp, Nuseirat.

I walked the street where he used to play football with his brothers and where his childhood home used to stand, now replaced by an apartment building after it was reduced to rubble by an Israeli missile during Israel’s 2014 war on Gaza.

This is also where, as a child during the first Intifada, he was brutalised and some of his friends were killed at the hands of Israeli soldiers who were given permission by then Defence Minister Yitzhak Rabin to break the bones of Palestinians who had rebelled against the Israeli occupation and colonisation.

I visited his school, Nuseirat Elementary School for Boys. I wondered which entrance Israeli soldiers used when they routinely stormed the school. I remembered the stories my father told me about Israeli soldiers shooting tear gas into the school’s courtyard, and how the older kids, in an effort to impress the younger ones, would run up to the canisters and kick them back in the direction of the soldiers.

But I also visited places my family had happy memories of. My lovely aunt Soma and cousin Yazan took me to the famous Gaza beach. We sat in a cabana adorned with Palestinian flags and sipped fresh mango juice, as the sun was setting. I watched as young couples played with their children and enjoyed their Friday.

I thought about my grandparents, who took walks on this same beach with my father and his siblings – happy moments preserved in a few blurry and worn photographs in our family photo albums. They would take their donkey cart every Friday to buy a fresh watermelon from the market and spend a whole day basking in the gorgeous Mediterranean sun.

Though there was so much pain and trauma on that beach, it was clear to me that the sea provided joy to the people of Gaza, just as it had for my grandparents years ago.

I also spent time with my cousin Lamees and her beautiful baby boy Tamim, who just a few months into his life already had a massive personality. In Lamees’s lovely apartment, we talked for hours, went through family photo albums over many cups of coffee and played with Tamim amid the regular blackouts Gaza suffered from.

I walked the streets of Jabalia, Shujiya and other neighbourhoods within and around Gaza city with my good friend Ghaida. We shopped for tatreez (traditional Palestinian embroidery), ate falafel, and struggled to keep track of each other in the bustling alleyways. The streets were alive with vendors, selling sweets and spices, and children atop donkeys selling produce from their family farms.

After spending two months in Gaza, I left, having grown an unbreakable bond with my family. I made so many beautiful new friendships and experienced the places and the people from the stories I have been told since childhood.

The day after I returned to Seattle, I woke up to the paralysing news that Gaza was being brutally bombarded and Palestinians were being killed and maimed. The Israeli military had begun yet another barbaric assault on Gaza, which in three days stole the lives of 49 Palestinians, including 17 children.

In a panic, I immediately began messaging my cousins and friends. Thankfully, everyone survived, but not without being traumatised once again.

Baby Tamim, who had been keeping his mom awake with his teething fussiness, was now sleepless in terror of the loud explosions right outside their apartment building in Gaza city. At the age of five months, he had already lived through his first war. Before his first tooth had appeared, he had experienced more trauma than most likely will in their entire lives.

In Gaza, I witnessed the raw impact of US-Israeli security cooperation in the remains of bombed apartment buildings, businesses, media offices, the growing refugee camps and the overflowing graveyards. These scenes have deeply impacted me, not only as a Palestinian, but as an American who directly, though involuntarily, contributes to that destruction.

My return home not only helped me understand what it means to live under Israeli siege and occupation, but gave my commitment to the Palestinian cause new vigour and grew my pride in my people and my country.

Today, I dream of the day that Gaza and all of Palestine will be free and I, and all my family, will be able to go back to our ancestral land in Beit Daras. On this sacred day, we, Palestinians, will start collectively rebuilding what was brutally stolen from us and make Palestine a comfortable, peaceful home for future generations.

The views expressed in this article are the author’s own and do not necessarily reflect Al Jazeera’s editorial stance.

Zarefah Baroud
Zarefah Baroud is a PhD candidate at the University of Exeter’s European Centre for Palestine Studies. She currently works as the Digital Media Associate with the organisation American Muslims for Palestine. Baroud received her Master’s degree in Policy Studies from the University of Washington, where she researched American aid programmes to the Israeli military.

Latest posts by Zarefah Baroud (see all)
Share this on WhatsApp

Author: Zarefah BaroudZarefah Baroud is a PhD candidate at the University of Exeter’s European Centre for Palestine Studies. She currently works as the Digital Media Associate with the organisation American Muslims for Palestine. Baroud received her Master’s degree in Policy Studies from the University of Washington, where she researched American aid programmes to the Israeli military.