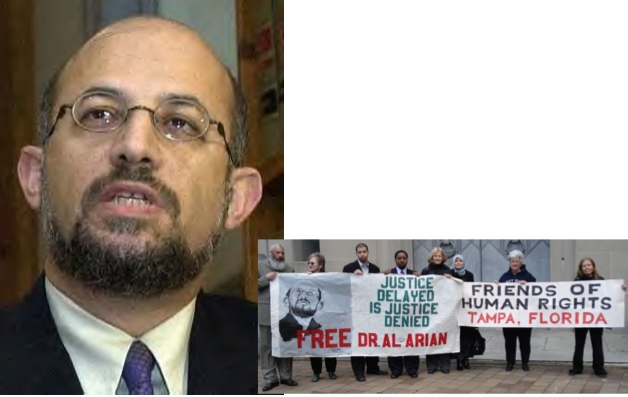 On this day ten years ago Dr. Sami Al-Arian was snatched from his family and community by the U.S. authorities in a pre-dawn raid that the professor described in a poem. Thus, today marks the beginning of a second decade of the incessant persecution of a voice of conscience for freedom in Palestine, and equal justice for all in America. This injustice against Dr. Al-Arian and his family has lasted now more than the entire tragic Iraqi war, launched one month after the arrest of Dr. Al-Arian.

Throughout his ordeal, Dr. Al-Arian spent over 5 ½ years in prison (3 ½ years in solitary confinement), and an additional 4½ years under house arrest.

Despite a trial, an acquittal, and a subsequent plea agreement, the government continues to pursue Dr. Al-Arian in an effort to punish him and once again jail him, due to his political and religious beliefs in a country that prides itself on the bill of rights that purportedly guarantees freedom of beliefs, opinions, and associations.

Tragically many American Muslim families have suffered since the dreadful events of September 11, 2001 in the name of the so-called war on terror. It has claimed many innocent casualties, as the government pursued many individuals, such as Dr. Al-Arian, based on their thoughts, opinions, beliefs, and associations. In many cases the government targeted individuals by manufacturing charges against them as the government authorities planned, financed, and executed the fake crimes.

Whether it was thought crimes like Dr. Al-Arian’s,manufactured charges, or entrapment the government employed a tactic called “preemptive persecutions,” in which the government reversed the system of justice: first select the targets then match them with a crime to secure convictions. Although this tactic failed with Dr. Al-Arian, far too many individuals and families have fallen victims to this blatantly unjust practice that makes mockery out of the constitution.

Today Americans of good conscience must show concern by questioning these underhanded tactics used by the government. They must reject the practice of targeting individuals like Dr. Al-Arian as well as many other hundreds, because of their religious or political beliefs.

On this day all Americans must renew their utmost commitment to the constitutional promise of the bill of rights and its protections of due process, equal rights, civil liberties, and political freedoms. Our pledge of “Justice and Liberty for all” is not a cliché but the principle under which our country was founded, and our system of justice has endured. We must live up to it for the sake of the future of our Republic.