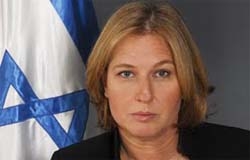 In an interview with London based satellite television station, al-Hiwar, the editor-in-chief of al-Quds al-Arabi newspaper, Abdel Bari Atwan, revealed the existence of intelligence reports documenting a secret meeting between former Israeli Foreign Minister, Tzipi Livni, and Amr Mousa during the latter’s unexpected visit to Ramallah on November 4 – ten days before the attacks on the Gaza Strip.

Reports mentioned that Livni made a direct request from Amr Mousa to pre-occupy Egyptian President, Mohamed Morsi, during this period with internal affairs.

This matter occupied Egyptian public opinion and talk show programs and he escalated his attack on President Morsi as the attack on Gaza escalated.

According to Atwan, “these reports coincide with statements made by Israeli Middle East expert, Binhas Anbari, during an interview with the satellite TV channel ‘Russia Today’. Anbari asserted that Egyptian President, Mohammed Morsi, aborted the Israeli operation in Gaza before it began, and that “we counted on forces inside Israel to preoccupy him with internal political and economic affairs.”