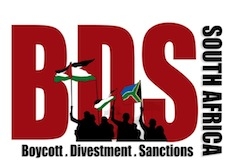 The ANC’s 53rd National Conference has reaffirmed a resolution supporting the Palestinian Boycott, Divestment and Sanctions (BDS) against Israel campaign.

In addition, the ANC adopted resolution 35 (g) that specifically called for “all South Africans to support the programmes and campaigns of the Palestinian civil society which seek to put pressure on Israel to engage with the Palestinian people to reach a just solution.” In 2005 Palestinian civil society issued a call to the international community for a program and campaign of boycott, divestment and sanctions (BDS) to be applied against Israel as a way to pressure Israel to end its violations of international law, respect Palestinian human rights and engage in fair negotiations for a just peace.

Mbuyiseni Ndlozi of BDS South Africa welcomed today’s decision: “This reaffirmation by the ANC’s National Conference, its highest decision making body, is by far the most authoritative endorsement of the Boycott, Divestment and Sanctions (BDS) against Israel campaign. The ANC has now taken its international conference resolutions, and officially made it the policy of the ANC. We look forward to working with the ANC and specifically the ISC steering committee to expedite its implementation.”

Another hard-hitting resolution on Israel that was adopted by the ANC’s 53rd National Conference was 35 (j): “The ANC abhors the recent Israeli state-sponsored xenophobic attacks and deportation of Africans and request that this matter should be escalated to the African Union”. In June this year Israeli anti-African protests turned into full-fledged race riots. The Israeli racism and xenophobia against Africans is shared and even encouraged by Israeli politicians including the Israeli Prime Minster, Benjamin Netanyahu, who has said: “If we don’t stop their [African immigrants’] entry, the problem that currently stands at 60,000 could grow to 600,000, and that threatens our existence…and threatens the social fabric of society, our national security and our national identity”. Israel’s Minister of Interior, Eli Yishai, has said that African immigrants “think the country doesn’t belong to us, the white man!” And the Israeli parliamentarian, Miri Regev, has publicly compared Sudanese people to “a cancer”.

Finally, in a blow to the Israeli lobby, the ANC also adopted resolution 35 (c) stating: “The ANC is unequivocal in its support for the Palestinian people in their struggle for self-determination, and unapologetic in its view that the Palestinians are the victims and the oppressed in the conflict with Israel.” In the build up to the ANC’s National Conference the Israeli lobby including the South African Jewish Board of Deputies, demanded an even-handed, balanced and nonpartisan rather than a decisive and solidarity role by the ANC in the Palestinian-Israeli issue.