Courts must decide on refugee camps 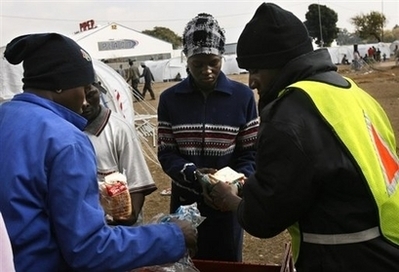 Picture: (AFP/File/Gianluigi Guercia)- Displaced foreign nationals receive food in at a United Nations High Commission for Refugees (UNHCR) camp on the outskirts of Johannesburg. Thousands have returned home and others — gripped by fear and uncertainty — are waiting for the closure of the camps for displaced foreigners.

South Africa’s courts have been asked to order that the temporary safe sites set up for refugees after xenophobic violence be kept open until their charges are reintegrated with communities.

The urgent application, in the Pretoria High Court, has been brought by the Consortium for Refugees and Migrants in South Africa (CoRMSA) and Wits Law Clinic.

The organizations have asked the court to order the government to communicate and implement a comprehensive reintegration strategy which adequately protects the rights of all.

They have also requested an order that the government restore the Rifle Range temporary safe site and not dismantle it until the comprehensive reintegration strategy is in place.

A wave of xenophobic attacks started in Johannesburg’s Alexandra township on May 12 and spread around the country, leaving more than 62 people dead and 17,000 displaced.

On Friday, the Gauteng government said the remaining 3340 people still in shelters would have returned to their communities by August 15.