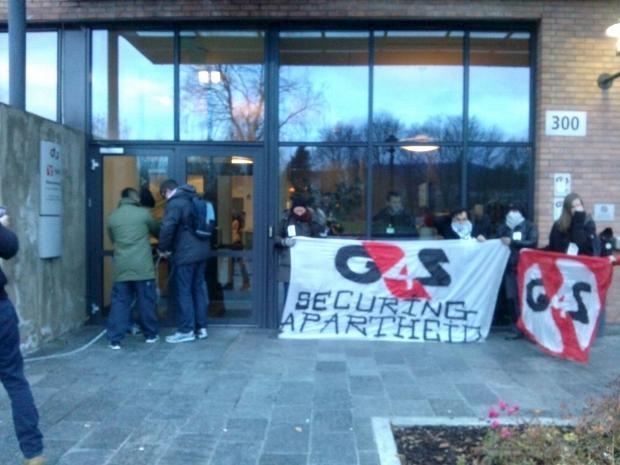 G4S blockaded in Oslo over support for Israeli apartheid

Activists block the entrance to G4S’ offices in Oslo.

Early this morning, a group of activists from the Palestine Committee of Norway blocked the entrance to the offices of the security firm G4S in Oslo. The activists demanded that G4S stop all activities that contribute to the occupation of the West Bank and Gaza. The blockade adds weight to a petition — signed by 21 Norwegian organizations — which was presented to G4S management last week.

The Palestine Committee writes in a press release:

“G4S is contributing to human rights violations against the Palestinians. This is ethically unacceptable,” says one of the activists, Vanja Alling.

G4S has, since 2002, promised to end its contracts with the Israeli military, police and illegal settlements in the West Bank, but this has proven not to be carried out in practise. Here are some of the revelations from [the Danish investigative group] Danwatch in 2011, showing that G4S is still involved in the occupation of Palestine:

· G4S provides equipment and services to Israeli prisons in which Palestinians, among them children, are held in violation of the Geneva conventions. According to Israeli human rights organizations, Palestinians face torture in these prisons.

“Most Norwegian companies and individuals do not want to be associated with the brutal repression of the Palestinians. We know that several Norwegian companies and organizations are considering terminating their contracts with G4S due to their involvement in the occupation. The campaign against G4S will continue until the company no longer participate in the Israeli occupation,” says Vanja Alling.

The blockade lasted an hour and the activists promised to be back again soon.

On 1 November, G4S management in Norway received a petition titled G4S contributes to the occupation of Palestine, signed by 21 groups, including trade unions, political parties, Palestine solidarity organizations, funding organizations, Amnesty International, and YMCA-YWCA. The signatories stated: ”G4S must immediately withdraw from all activities on occupied Palestinian land and halt all deliveries to Israeli prisons in which Palestinian prisoners are imprisoned in violation of the Geneva conventions.”

Here’s the full text of the petition:

G4S CONTRIBUTES TO THE OCCUPATION OF PALESTINE

In October 2011 the Danish research center Danwatch revealed that G4S is still involved in the Israeli occupation industry by supplying equipment and services to the Israeli military, prisons and illegal settlements in the West Bank. This has happened although the company has repeatedly said that it will stop these activities based on ethical considerations.

In April 2012, G4S decided to exit from their contracts with military checkpoints, one Israeli prison and one police station in the West Bank, when the contract terms expire. However, G4S has stated it will continue to provide security and alarm services for banks and supermarkets in Israeli settlements. In addition, G4S will continue to supply equipment and services to Israeli prisons. In these prisons West Bank Palestinians are detained in violation of the Geneva conventions. According to the Norwegian People’s Aid and Norwegian Union of Municipal and General Employees’ report “Dangerous Connections” from 2012, Palestinian prisoners are routinely subjected to torture in these centers. Israeli human rights organizations also claim that Palestinian children are being held there.

At the same time as the situation for Palestinians is becoming increasingly desperate as a result of the Israeli occupation, G4S chooses to participate in activities that directly contribute to maintaining illegal settlements and military repression. Israel’s settlement policy in the West Bank violates international law and is condemned by the international community. Despite this, new settlements are being built and existing settlements expanded. Palestinian land and limited water resources are confiscated, and the possibilities for free movement for Palestinians are further tightened. Expansion of Israeli settlements has led to widespread destruction of Palestinian homes and forcible transferring of Palestinians. The Israeli settlement policy violates Palestinians’ rights to self-determination, equality, property, decent living conditions and freedom of movement.

The signed organizations believe that G4S’ deliveries to settlements, Israeli military, prisons and police are unethical, as this is a part of maintaining the occupation of Palestinian territories. G4S must immediately withdraw from all activities on occupied Palestinian land and halt all deliveries to Israeli prisons in which Palestinian prisoners are imprisoned in violation of the Geneva conventions.