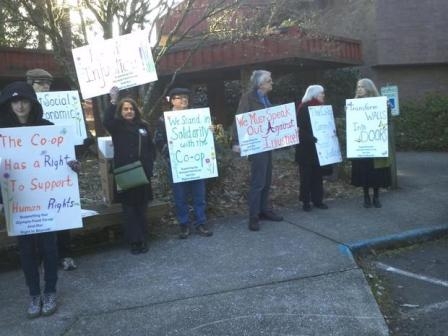 Supporters of the Olympia Food Co-op before a court hearing on Monday, 27 February, which threw out a lawsuit designed to overturn a boycott of Israeli goods

In a major setback for Israeli efforts to suppress the boycott, divestment and sanctions (BDS) movement in the United States, a judge in Olympia, Washington today dismissed a lawsuit designed to force the Olympia Food Co-op to rescind its boycott of Israeli goods.

The judge ruled that the lawsuit, brought by opponents of the boycott, violated a Washington State law designed to prevent abusive lawsuits aimed at suppressing lawful public participation. The court said it would award the defendants attorneys’ fees, costs, and levy sanctions against the plaintiffs.While the lawsuit was brought by several individuals against present and former members of the Olympia Food Co-op Board, it was planned in collusion with StandWithUs, a national anti-Palestinian organization, working with the Israeli government, an Electronic Intifada investigation revealed last September.

“SLAPP” lawsuit designed to chill free speechThe Center for Constitutional Rights (CCR), whose lawyers acted for the Olympia Food Co-op argued that the lawsuit was an example of “SLAPP” – Strategic Litigation Against Public Participation. In a statement this afternoon, CCR explained:

SLAPPs are lawsuits that target the constitutional rights of free speech and petition in connection with an issue of public concern Although many cases that qualify as SLAPPs are without legal merit, they can nonetheless effectively achieve their primary purpose: to chill public debate on specific issues. Defending against a SLAPP requires substantial money, time, and legal resources, and can divert attention away from the public issue and intimidate and silence other speakers. Washington State’s Anti-SLAPP statute was enacted in 2010 to deter such lawsuits.Today, Thurston County Superior Court Judge Thomas McPhee told a packed courtroom he agreed with that analysis and dismissed the lawsuit, ordering the StandWithUs-backed plaintiffs to pay court costs and legal fees.The judge also also upheld the constitutionality of Washington’s anti-SLAPP law, which the plaintiffs had challenged, CCR noted. Each of the defendants in the case could be entitled to receive up to $10,000 from the plaintiffs in addition to legal fees.“We are pleased the Court found this case to be what it is – an attempt to chill free speech on a matter of public concern. This sends a message to those trying to silence support of Palestinian human rights to think twice before they bring a lawsuit,” CCR quoted Maria LaHood, a senior staff attorney as saying.

BDS is a national movement, judge findsIn attempting to overturn the Olympia Food Co-op’s boycott of Israeli goods, the plaintiffs had argued that the Co-op could only observe “nationally-recognized” boycotts, and that BDS did not fit that description.According to live tweets of the judge’s statement by Anna-Marie Murano, on behalf of the Palestine Freedom Project the judge found that BDS was “nationally recognized.”