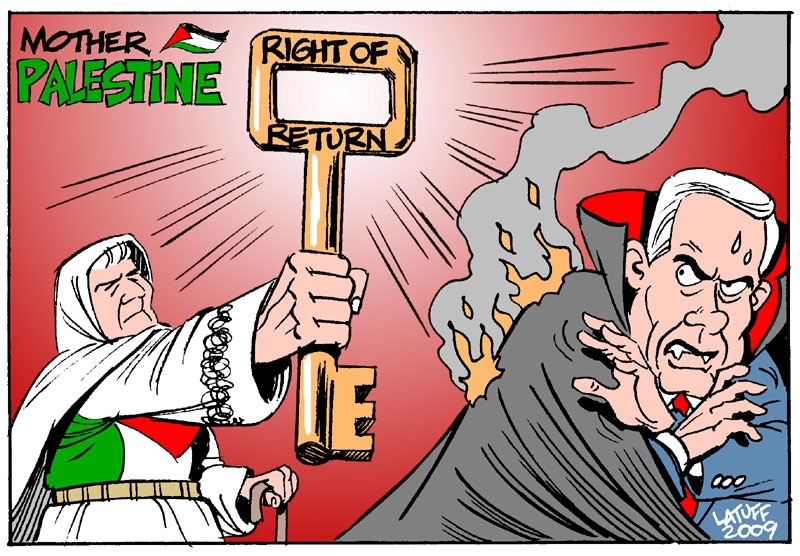 The following statement, dated 1 January 2013, is issued by Jews for the Palestinian Right of Return. The initial signers are listed below along with a link for those who wish to sign on.

For more than a century, Zionists have sought to construct a “Jewish state” through forced removal of the indigenous Palestinian people.

In 1948, this state was established through the Nakba (Catastrophe): erasure and occupation of more than 500 Palestinian towns and villages, dispossession of over 750,000 Palestinians, and a terror campaign of which the massacre at Deir Yassin is but the most infamous example. Since 1967, Israel has also occupied and colonized the remainder of historic Palestine. Today, this relentless ethnic cleansing continues — armed and financed by the US and its allies — on both sides of the 1948 “Green Line.”

As a cumulative result, seventy percent of Palestinians are in exile, the world’s largest refugee population.

Nowhere is this clearer than in Gaza, where Israel inflicts particularly brutal collective punishment on 1.7 million people — most of them refugees — for defiantly resisting expulsion from their homes throughout historic Palestine.

“Pick a point, any point, along [Gaza’s] 25-mile coastline,” writes Gaza City resident Lara Aburamadan, “and you’re seven or so miles — never more — from the other side. The other side is where my grandparents were born, in a village that has since become someone else’s country, off limits to me. You call it Israel. I call it the place where the bombs come from.”

To hide these crimes and shield itself from their consequences, the Zionist regime officially denies the Nakba, the ethical equivalent of Holocaust denial. It has even authorized legislation to penalize those who memorialize the Nakba — a step toward criminalizing its observance altogether.

As it is for all colonized peoples, liberation means reversing dispossession. “The Palestinian cause,” writes Dr. Haidar Eid in Gaza, “is the right of return for all refugees and nothing less.”

Return — one of the key demands of the Boycott, Divestment, and Sanctions (BDS) campaign — is affirmed in U.N. resolution 194, but derives from the principle of universal human rights and, as such, cannot be renounced or abandoned by any body or representative; it inalienably attaches to Palestinians, both individually and collectively.

Despite this, even some who criticize Israel’s 1967 occupation claim that Palestinian return is “unrealistic.”

However, solidarity means unconditional support for the just aims of those resisting oppression. As Palestinian journalist-activist Maath Musleh explains: “If you think that [return] is not possible, then you are really not in solidarity with the Palestinian cause.”

Some also object that refugees’ return would mean an end to the “Jewish state.” But supporters of social justice must ask themselves how they can defend a state whose very existence depends on structural denial of Palestinian rights.

Recently, more than a hundred leading Palestinian activists reaffirmed their opposition “to all forms of racism and bigotry, including, but not limited to, anti-Semitism, Islamophobia, Zionism, and other forms of bigotry directed at anyone, and in particular people of color and indigenous peoples everywhere.”

Such racism and bigotry is reflected precisely in Zionism’s attempt to erase the Palestinian people, a century long campaign that dishonors the memory of Jewish suffering and resistance in Europe.

The moral response is clear: “There is one geopolitical entity in historic Palestine,” writes Palestinian journalist Ali Abunimah. “Israel must not be allowed to continue to entrench its apartheid, racist and colonial rule throughout that land.”*

As Jews of conscience, we call on all supporters of social justice to stand up for Palestinian Right of Return and a democratic state throughout historic Palestine — “From the River to the Sea” — with equal rights for all.

The full measure of justice, upon which the hopes of all humanity depends, requires no less.

· Tikva Honig-Parnass, Former member of the Zionist armed forces (1948); author of False Prophets of Peace: Liberal Zionism and the Struggle for Palestine

· David Klein, Organizing Committee, US Campaign for the Academic and Cultural Boycott of Israel

· Michael Letwin, Co-Founder, Labor for Palestine; Organizing Committee, US Campaign for the Academic and Cultural Boycott of Israel; Al-Awda NY: The Palestine Right to Return Coalition

· Mike Marqusee, Author If I Am Not for Myself: Journey of an Anti-Zionist Jew

· Hadas Thier, Contributing author of The Struggle for Palestine; Israeli-born daughter and grand-daughter of Nazi Holocaust survivors

To support the Jews for Palestinian Right of Return statement below, please:

· Go here to sign as an individual or organization.

· Or e-mail jfpror at gmail.