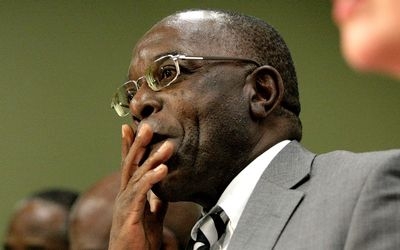 Archbishop Desmond Tutu in August last year caused an international sensation when he refused to appear on the same platform in Johannesburg with “that warlord,” the former British Prime Minister Tony Blair.

I had emailed Judge Willie Seriti a few days earlier asking him to subpoena Blair to answer questions relating to the arms deal. Seriti’s spurious reply was that it was “premature,” and so the Seriti Commission squandered a unique opportunity to interrogate what motivated the arms deal scandal.

That Blair incident was resurrected with Seriti’s banal response last week to Advocate Norman Moabi which included: “Mr Crawford-Browne in particular has during the course of 2012 inundated this Commission with emails questioning how the Commission was conducting its business.”

My computer records that, in fact, three of the eight emails I sent the Seriti Commission during 2012 referred to my request to have Blair subpoenaed. Nor do eight emails over the course of a year qualify as any “inundation”!

Blair’s history of war crimes includes “sexing up” unreliable intelligence information regarding “weapons of mass destruction” to justify the illegal Anglo-American “War On Iraq” in 2003. The questions I intended to pose to Blair included:

1.The pressure he applied on our government to buy BAE Hawk and BAE/Saab Gripen fighter aircraft despite rejection in 1997 of those proposals by the SA Air Force because these aircraft are both unsuited to South African requirements and too expensive,
2.The complicity of his government in BAE’s payment of bribes of £115 million, and his placement of British officials to block investigations by the Auditor General and parliamentarians into the fraudulent offset contracts,
3.The default clauses of the 20 year Barclays Bank/ECGD loan agreements for the BAE contracts and (to cite legal counsel for former Finance Minister Trevor Manuel) “their potentially catastrophic consequences for South Africa,”
4.The role of the so-called “BAE/Al Yamamah slush fund” administered by the Bank of England, and its purpose to destabilise resource-rich countries in Asia and
During the first six years of his tenure as prime minister, Blair involved Britain in five wars. Even before he became prime minister, Blair was the “number one salesman” for BAE on the discredited arguments that arms exports create jobs and earn foreign exchange for Britain. After Blair became prime minister, BAE was said to have “a key to the back door of number 10 Downing Street!”

BAE’s notoriety for corruption is such that it ranks as organised crime on a scale that makes Italian mafia look like saints. US government authorities in 2010 and 2011 fined the company US$479 million because of bribes that BAE had laundered through the American banking system with the complicity of Blair’s government.

Readers will also recall that Blair in 2006 squelched an investigation by the British Serious Fraud Office into bribes paid to Saudi princes on false explanations that the investigation threatened British national security. In reality, Blair was blocking revelations of the US$150 billion BAE/Al Yamamah slush fund, its purpose being:

a)To guarantee British and US support for the Saudi royal family against domestic insurrection, and
b)To fund covert destabilisation of resource-rich countries in Asia and Africa.
It was Saudi money that funded the Afghan mujahideen during the 1980s. The blowback consequences included not only the 9/11 attack on New York, but that Pakistan, Afghanistan, Yemen and Somalia are “failed states.” The futures for Libya, Syria and Algeria now hang in the balance.

Again, it is Saudi money that funds the insurrection in Mali and the Boko Haram in Nigeria, and deliberate “false-flag” destabilisation of resource-rich countries in Africa. “Africa’s First World War” in the Democratic Republic of Congo (DRC) has already killed an estimated ten million people. The war in the DRC is so named because it is about the looting of natural resources required in the “First World.”

Blair is the advisor and close friend of the godfathers of that war, Rwandan President Paul Kagame and Ugandan President Yoweri Museveni. South Africa is another target for destabilisation, given this country’s unique mineral wealth. As the repercussions stemming from the crisis at British-owned Marikana have highlighted, South Africa now risks an economic and political meltdown.

The country still has not recovered from the consequences of the South African War (1899-1902) more than a century ago, a war fought because of British greed to seize control of the newly discovered Witwatersrand goldfields.

The Scorpions in November 2008 raided BAE’s premises in Pretoria and the Western Cape, and seized 460 boxes and 4.7 million computer pages of evidence against BAE. President Jacob Zuma’s legal counsel was unable to refute before the Constitutional Court that there is a mountain of evidence of corruption against BAE, and also the German Frigate and Submarine Consortia.

Amongst the documents that I submitted to the Constitutional Court was 160 pages of affidavits that detail how and why BAE laundered bribes of £115 million (R1.5 billion) to win the warplane contracts, to whom the bribes were paid, and which bank accounts were credited. The “remedies in case of bribes” clauses in the arms deal contracts give South Africa the right summarily to cancel the contracts, recover the money and claim compensation.

That was the reason behind the appointment of the Seriti Commission in October 2011. South Africans were assured of an open and transparent investigation. In deviating from the Commission’s terms of reference, Judge Seriti now chases “red herrings” or “wild geese” and, alternatively, makes veiled threats to silence and/or to jail the whistleblowers.

When asked how the Seriti Commission could impact on BAE’s future fortunes, a director is reputed to have retorted: “oh Seriti, we’ve got him covered!”

That is how BAE operates. As the Barclays and HSBC banking scandals also confirm, the British do both corruption and war with panache.