The Demonization of Richard Falk 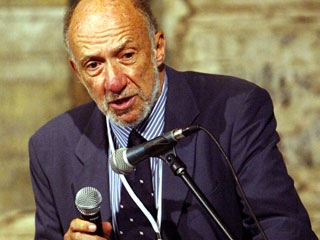 The Zionist organization UN Watch has cited a commentary by Professor Richard Falk on the Boston bombings in a letter to U.N. Secretary-General Ban Ki-Moon demanding that that Prof. Falk be reprimanded for it.

Prof. Falk, who serves as the United Nations Special Rapporteur on the situation of human rights in the Palestinian territories occupied since 1967, originally posted the commentary on his blog and I republished it, as I often do his writings, with his kind permission, in Foreign Policy Journal, which version UN Watch links to in its letter. As one should expect, the letter from UN Watch is characterized by its dishonesty and vain attacks on Prof. Falk’s character that deflect attention away from and fail to address the substance of what he wrote.

The UN Watch letter begins with the lie that Prof. Falk in his article “justifies the Boston terrorist attacks”. The UN Watch letter also falsely claims that Prof. Falk blamed the Boston terrorist attacks on Israel and characterized the attacks as “due ‘retribution’ for American sins”. Where Mr. Falk discusses Israel in the article, it is in the larger context of blowback for U.S. foreign policies, including the 9/11 attacks, which, as the 9/11 Commission noted in its report, were motivated in no small part by U.S. support for Israel’s oppression of the Palestinians. Nowhere in his commentary does Mr. Falk blame Israel for or otherwise connect Israel to the bombings in Boston. As for the word “retribution”, where it appears in Mr. Falk’s article, it is in the context of a quote from someone else. What Falk actually wrote was:

Listening to a PBS program hours after the Boston event, I was struck by the critical attitudes of several callers to the radio station: …. Another caller asked “is this not a kind of retribution for torture inflicted by American security forces acting under the authority of the government, and verified for the world by pictures of the humiliation of Iraqi prisoners at Abu Ghraib?”

Nowhere did Falk say the attack was “due” or “justified”. The letter goes on this way with its fabricated charges against Falk’s character. At the UN Watch blog, the letter is prefaced with the remark that Falk “was recently expelled by the Human Rights Watch [HRW] organization”. The link directs readers to a video embedded in another UN Watch blog post claiming that Falk was “Removed For Anti-Semitism”, the source for that claim being none other than Hillel Neuer, the Executive Director of UN Watch and author of the letter to the Secretary-General. In fact, the reason Mr. Falk left HRW’s local support committee in Santa Barbara, California, was because of HRW’s “longstanding policy, applied many times, that no official from any government or UN agency can serve on any Human Rights Watch committee or its Board. It was an oversight on our part that we did not apply that policy in Richard Falk’s case several years ago when he assumed his UN position.” But the truth just doesn’t serve Neuer’s or his organization’s agenda, so he prefers to make up lies to demonize an honorable man.

The UN Watch’s lies have been parroted elsewhere by unscrupulous so-called “journalists” who don’t let little things like honesty or integrity get in the way of an opportunity to manufacture a sensational headline.

Ann Beyefsky, for example, at Breitbart, unashamedly lies that “Richard Falk has published a statement saying Bostonians got what they deserved in last week’s terror attack” before accusing him of “antisemitism” for his criticisms of Israeli policies in his role as Special Rapporteur for the U.N. The fact that Mr. Falk is himself Jewish shouldn’t cause anyone to be surprised that he would face such a charge; indeed, this kind of intellectually and morally bankrupt accusation is standard fare for apologists of Israel’s constant violations of international law. It certainly comes as no surprise that Beyefsky is unable to produce any quotes from Mr. Falk to back up any of her disgraceful lies about him.

The JTA (Jewish Telegraph Agency) repeated in a headline the lie that Falk “pins blame for Boston Marathon bombing on ‘Tel Aviv’” and repeats the falsehood that Falk “called the Boston attack ‘retribution’ for the actions of the U.S. military in Afghanistan, Iraq and Pakistan”, which leads one to wonder whether the author of the JTA story even bothered to read Falk’s article or relied entirely on UN Watch’s distortions of it for its own reporting.

The Times of Israel also picked up the story, stating that Falk “has a history of provocative and outrages [sic, i.e., “outrageous”] statements, both supporting Islamic terror and bashing Israel.” The Times of Israel would have a very hard time indeed finding any substantiation for its lie that Falk has made statements “supporting Islamic terror”; and “bashing” Israel is the usual euphemism for legitimately criticizing Israel’s constant violations of international law. Just as instructively, the “outrageous” statement referred to in this case is Falk’s remark that “The American global domination project is bound to generate all kinds of resistance… the United States has been fortunate not to experience worse blowbacks”. The Times of Israel spins this observation into the dishonest headline, “UN official says US had Boston attack coming”; the idiom “to have something coming” meaning, of course, that the outcome is deserved. This headline is just another lie. Yet Mr. Falk neither said nor implied that the U.S. deserved the attacks in Boston.

To offer several more examples of the disingenuous responses to Mr. Falk’s article, Mark Leon Goldberg at UN Dispatch calls Falk’s commentary a “dumb” “diatribe” and feigns not to understand Mr. Falk’s rather elementary point that the U.S. government’s policies create hatred towards the country and result in blowback such as the 9/11 attacks. John Hinderaker at the Power Line blog repeats the lie that Mr. Falk said “Boston had it coming”. Hinderaker reveals his remarkable ignorance by saying that Falk’s statement that “the neocon presidency of George W. Bush, was in 2001 prior to the attacks openly seeking a pretext to launch a regime-changing war against Saddam Hussein’s Iraq”, among others, is “false” (the truth of that and other of Mr. Falk’s statements is hardly a secret and not in the least bit controversial). Hinderaker goes on to dismiss Falk as “a lousy writer”, “insane”, “a psychopath” who has a “demented frame of reference, that we associate with mental illness”, “a nut; a crank”, “a mental case”, someone who “should seek treatment for his mental illness.” Bryan Preston at PJ Media similarly repeats the lies that Falk “Justifies” the bombing in his article and said that the U.S. “had this coming”. The Global Dispatch likewise parrots the lie that “Richard Falk said in a statement that Bostonians got what they deserved”.

One is just not supposed to tell the public that U.S. foreign policy results in what intelligence analysts call “blowback”. This is a forbidden truth, reminiscent of the 2007 presidential debate when Rudy Giuliani condemned Ron Paul for making the completely uncontroversial statement that the 9/11 attacks were “blowback” for U.S. foreign policy, to which Dr. Paul replied by standing firm and repeating the uncomfortable truth before the audience. It is a point that Michael Scheuer, former head of the CIA’s Osama bin Laden unit, Alec Station, has also made in a commentary on the Boston bombings published at Foreign Policy Journal, in which he remarks that “it is blatantly obvious from the evidence the authorities have presented to date that the attackers were motivated by what the U.S. government does in the Muslim world”.

It is clear from the hysterical reactions to Mr. Falk’s commentary on the Boston bombings that his own sin is in speaking uncomfortable truths many Americans don’t want to hear about their government’s policies, as well as for his courageous stand against Israel’s lawlessness in the face of such demonization by its Zionist apologists.

Jeremy R. Hammond is an independent political analyst and recipient of the Project Censored Award for Outstanding Investigative Journalism. He is the author of The Rejection of Palestinian Self-Determination: The Struggle for Palestine and the Roots of the Israeli-Arab Conflict and Ron Paul vs. Paul Krugman: Austrian vs. Keynesian economics in the financial crisis. He is the founding editor of Foreign Policy Journal and can also be found on the web at JeremyRHammond.com.