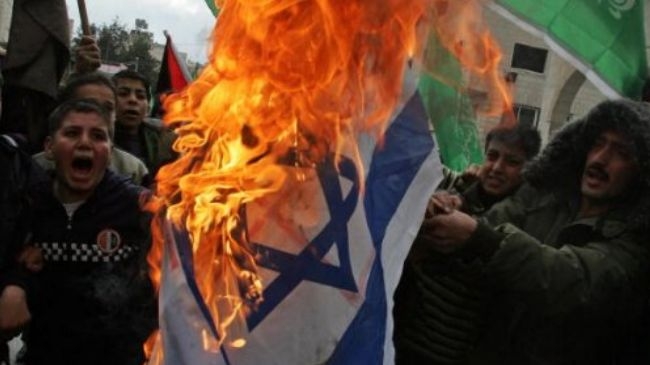 Dr. Kevin Barrett, a Ph.D. Arabist-Islamologist, is one of America’s best-known critics of the War on Terror. Dr. Barrett has appeared many times on Fox, CNN, PBS and other broadcast outlets, and has inspired feature stories and op-eds in the New York Times, the Christian Science Monitor, the Chicago Tribune, and other leading publications. Dr. Barrett has taught at colleges and universities in San Francisco, Paris, and Wisconsin, where he ran for Congress in 2008. He currently works as a nonprofit organizer, author, and talk radio host. He is the co-founder of the Muslim-Christian-Jewish Alliance, and author of the books Truth Jihad: My Epic Struggle Against the 9/11 Big Lie (2007) and Questioning the War on Terror: A Primer for Obama Voters (2009).

Iran’s President Mahmoud Ahmadinejad has been vilified in the Western media for daring to imagine “a world without Israel.” But according to news reports, Henry Kissinger and sixteen American intelligence agencies agree that in the near future, Israel will no longer exist. The New York Post quotes Kissinger “word for word”: In 10 years, there will be no more Israel.

The US Intelligence Community agrees, though perhaps not on the precise 2022 expiration date. Sixteen US intelligence agencies with a combined budget over USD70 billion have issued an 82-page analysis titled “Preparing for a Post-Israel Middle East.”

The US intelligence report observes that the 700,000 Israeli settlers illegally squatting on land stolen in 1967 – land that the entire world agrees belongs to Palestine, not Israel – are not going to pack up and leave peacefully. Since the world will never accept their ongoing presence on stolen land, Israel is like South Africa in the late 1980s.

The extremist Likud coalition governing Israel, according to the US intelligence report, is increasingly condoning and supporting rampant violence and lawlessness by illegal settlers. The report states that the brutality and criminality of the settlers, and the growing apartheid-style infrastructure including the apartheid wall and the ever-more-draconian system of checkpoints, are indefensible, unsustainable, and out of synch with American values.

The sixteen US intelligence agencies agree that Israel cannot withstand the coming pro-Palestinian juggernaut consisting of the Arab Spring, the Islamic Awakening, and the rise of the Islamic Republic of Iran.

In the past, dictatorships in the region kept a lid on the pro-Palestinian aspirations of their people. But those dictatorships began to topple with the fall of the pro-Israel Shah of Iran in 1979 and the establishment of a democratic Islamic Republic, whose government had little choice but to reflect its people’s opposition to Israel. The same process – the overthrow of dictators who worked with, or at least tolerated, Israel – is now accelerating throughout the region. The result will be governments that are more democratic, more Islamic, and far less friendly to Israel.

The US intelligence community report says that in light of these realities, the US government simply no longer has the military and financial resources to continue propping up Israel against the wishes of more than a billion of its neighbors. In order to normalize relations with 57 Islamic countries, the report suggests, the US will have to follow its own national interests and pull the plug on Israel.

Interestingly, neither Henry Kissinger nor the authors of the US Intelligence Report give any sign that they are going to mourn the demise of Israel. This is remarkable, given that Kissinger is Jewish and has always been viewed as a friend (if occasionally a tough friend) of Israel, and that all Americans, including those who work for intelligence agencies, have been influenced by the strongly pro-Israel media.

What explains such complacency?

Americans who pay attention to international affairs – a category that surely includes Kissinger and the authors of the Intelligence Report – are growing fed up with Israeli intransigence and fanaticism. Netanyahu’s bizarre, widely-ridiculed performance at the United Nations, where he brandished a cartoonish caricature of a bomb in such a way that he himself came across as a caricature of a “mad Zionist,” was the latest in a series of gaffes by Israeli leaders who seem prone to overplaying their hand.

A second factor is the festering resentment many Americans feel over the Israel Lobby’s imperious domination of public discourse. Every time a well-known American journalist is fired for going “off-script” about Israel, as happened to Helen Thomas and Rick Sanchez, a mostly-invisible backlash, like a tidal wave rippling beneath the surface of the ocean, grows in power. And every time the Israel lobby slaps down someone like Maureen Dowd, who recently observed that the same Israel-fanatics who dragged the US into the Iraq war are now trying to do the same thing with Iran, the more people begin to wake up and realize that people like Dowd, Thomas, and Sanchez are speaking the truth.

A third reason for complacency in the face of Israel’s impending demise: The American Jewish community is no longer united in support of Israel, much less its Likudnik leadership. Sophisticated Jewish journalists and analysts like Philip Weiss are recognizing the insanity of Israel’s current leadership and the hopelessness of its predicament. According to recent reports, it is no longer fashionable among young American Jews to care about Israel. And despite Netanyahu’s frantic attempts to sway Jewish voters toward the Mormon Likudnik Mitt Romney, polls show that Obama, who is on record saying he “hates” the “liar” Netanyahu, will easily win the majority of Jewish votes.

Finally, we come to the least obvious – but most powerful – reason for Kissinger’s and the CIA’s complacency in the face of Israel’s implosion: The inexorable trickle-down of knowledge that Israel and its supporters, not radical Muslims, carried out the 9/11 false-flag attacks.

Increasingly, it is not fringe anti-Semitic groups, but high-level responsible observers, who are saying this. Alan Sabrosky, the half-Jewish former Director of Strategic Studies at the US Army War College, has come on my radio show to say that he has discussed with his colleagues the “100% certainty” that Israel and its supporters did 9/11. And Alan Hart, the former lead BBC correspondent for the Middle East (and personal friend of Golda Meir and Yasser Arafat) has also come on my radio show to break the story that he, too, knows that Israel and company orchestrated 9/11.

Today, we even have a presidential candidate, Merlin Miller, who is on the record stating that Israel, not al-Qaeda, carried out the 9/11 attacks.

The chief purpose of 9/11 was to “seal in blood” an intense, unbreakable emotional bond between the US and Israel, in a desperate bid to assure Israel’s survival by launching a long-term US war against Israel’s enemies. As the “dancing Israelis” arrested for celebrating the 9/11 operation tried to convince the police: “Our enemies are your enemies. The Palestinians are your enemies.”

But more and more Americans, including the US intelligence community as a whole, now recognize that the enemies of Israel (the entire Muslim world of over 1.5 billion people, along with most of the non-European world) do not have to be the enemies of the United States. In fact, the US is going broke and sacrificing thousands of lives in wars for Israel – wars that damage, rather than aid, US strategic interests. (One of those interests, of course, is buying oil and gas from stable, cooperative governments.)

As the recognition grows that 9/11 was not a radical Islamic attack, but an act of dastardly, bloody treason by supporters of Israel, it will become ever-easier for American policy makers, following in the footsteps of Kissinger and the sixteen intelligence agencies, to recognize the obvious: Israel has reached the end of its shelf-life.