On Egypt’s Class-Struggle: Rabias of the World Unite 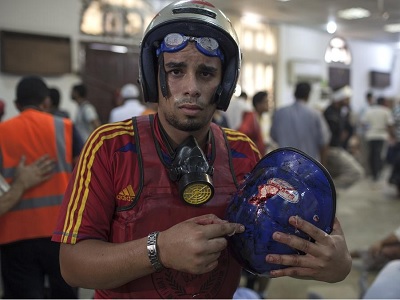 Anti-coup demonstrator holds the helmet of a protestor shot dead by police as he stands inside a packed field hospital. (Photo: Scott Nelson/Al Jazeera)

“Lord! You know well that my keen desire is to carry out Your commandments and to serve Thee with all my heart, O light of my eyes. If I were free I would pass the whole day and night in prayers. But what should I do when you have made me a slave of a human being?”

These were the words of the female Muslim mystic and poet, Rabia Al-Adawiya. Her journey from slavery to freedom served as a generational testament of the resolve of the individual who was armed with faith and nothing else.

Rabia’s story is multifarious, and despite the fact that the Muslim saint died over 12 centuries ago, few Egyptians are failing to see the centrality of her narrative to their own. In the north of the Nasr City district, tens of thousands of Egyptians chose the iconic mosque named after her to stage their sit-in and demanded the return to shar’iya (legitimacy) after it was seized in a brazen military coup which ousted elected President Mohammed Morsi on July 03.

Rabia’s narrative is essential because it was about freedom. She was born into a very poor family in Basra, Iraq. According to Farid ud-Din Attar who related her story, she was so poor that when she was born the family had nothing to wrap around her, not even oil to light their only lamp. Years later when Rabia was a grownup, she was kidnapped and sold into Egyptian slavery as she tried to escape a deadly famine in Iraq.

Rabia didn’t exactly challenge her master through organizing strikes and defiant sit-ins. She was alone and dominated by too many powerful forces that made her life of slavery and degradation absolute. So she spent most of the day as a slave, but late at night she would stay up and pray. It was more than praying, but an attempt at reclaiming her humanity, at comprehending the multitude of forces that chained her to earthly relations of slave and master, and in a sense, she tried to discover a level of freedom that could not be granted by a master’s wish.

In fact, her true ‘miracle’ was that of her faith under the harshest possible conditions, and her ability to strive for freedom while practically speaking, she remained a slave. It is as if this female poet, a heroin and a saint by the standards of many poor, downtrodden people, managed to redefine the relationship of the ongoing class struggle, and found freedom within herself. It is believed that her inconceivable faith was so strong that her master could not deal with the guilt of holding a saint a slave. So, she was freed.

Regardless of the precision of the details, Rabia Al-Adawiya’s legacy has passed on from one generation of Egyptians to the next. Like her, many of these Egyptians are mostly poor, immensely patient, and are hostage to the same century-old class struggle by which Rabia was defined.

In some way, the January 25 revolution included millions of Rabias fed up with oppression and servitude. But the class division that was highlighted after millions of Egyptians rose against the military coup became clearer than ever. These were the poorest of the poor, long alienated and dehumanized by both the ruling class and the conceited, intellectual groupings of self-described liberals and socialists. The unprecedented union between Egypt’s ruling class and anti-Muslim intellectual elite succeeded, to an extent, in blocking our view from the substantial class struggle underway in Egypt, where the poorest communities – yes, workers and peasants – were leading a historic struggle to reclaim democracy from the upper and middle class intellectuals. The former committed hideous murders against peaceful protesters, while the latter group found a way to explain why it was completely fine to mow down thousands of people staging massive sit-ins in Nahda Square, and yes, Rabia Al-Adawiya Square, named after Rabi.

The Rabias of Egypt are not hated, they are loathed. They have always been treated as sub-humans that live in their own dirty quarters which are unbelievably neglected shantytowns made up of haggard buildings stacked atop one another.  The Rabias of Egypt struggle to merely survive on a daily basis.

Faith serves the poor more than it serves the rich, so they have their mosques. It is a last escape against the harsh grinds of life. When the January 25 revolution erupted, a temporary union existed between the poor and the disenchanted middle class, as they had access to local and international media forums, and were disproportionately represented in their access to social media.

But when the first vote following the removal of Hosni Mubarak was held on March 19, 2011, all the way until the presidential runoff elections on June 16, 2012, the discrepancies began showing: Egypt’s poor seemed to have a whole different world of political preferences, favoring religious parties that spoke their language, over the liberals, socialists and all the rest. The loudest liberals and socialists seemed to appear on television, but as several rounds of voting had shown, they were the less relevant among Egyptians. The trend was unmistakable, Egypt sought a political program that was democratic and positioned with a religious discourse.

Liberals and socialists were once more alienated, this time democratically. Their own interpretation of a western-like democracy was in reality neither western-like nor democratic, and their combined numbers placed them at the bottom of the ladder of political relevance. They blamed everyone for their failings, initially the military, the remnants of the regime, and eventually the Muslim Brotherhood.

Previous Egyptian regimes had invested precocious resources to demonize any Egyptian Muslim with a political preference that didn’t venerate the regime. They demonized the Islamists in ways that reduced them to the level of sub-humans in the eyes of the ruling class. Many of the liberal and socialist forces that took part in the Jan 25 revolution grew up knowing no other discourse except seeing political Islam as evil that must be defeated. That discourse was strengthened after the signing of the Camp David Accords in the late 1970’s, for Israel was no longer the enemy, and the enemy were those who dared protest Egypt’s pro-US and pro-Israel policies.

Culture doesn’t change overnight. Collective thinking is not switched off and on with the press of a button. The fact is that the dominance of the Islamic narrative in post-revolution Egypt terrified those who became accustomed to the marginalization of political Islam. It was to the extent that the temporary alliance between the poor and the middle class was done with, in favor of a sinister alliance with the forces allied with the last regime, including the military. The combination was deadlier than any other time in Egypt’s modern history. Thousands of people fell dead and wounded in a few hours on August 14 starting with a crackdown on Rabia Al-Adawiya’s Square. The mosque was set ablaze. The depravity of the violence that followed, hailed by liberals and socialists, as well as regime supporters as a victory for democracy, is indescribable.

But as bloody and heart-wrenching as the last few days in Egypt have been, a sense of clarity finally prevailed. The Jan 25 revolution, inspiring as it was, left numerous questions unanswered, and presented the military with the opportunity to break away from the Mubaraks and re-brand itself as the protector of the nation. But real democracy proved too much for the military and the layers of corrupt political and economic elites it represents. Now, the rosy image of a peaceful revolution guided by its military to achieve a better tomorrow is over: the masks have all been lifted and the reality is much uglier than previously thought. Egypt’s real struggle for freedom and political definition is just starting.

Rabia’s 12- centuries- old legacy will not vanish even after the mosque was burnt. Many of the dead were witnessed and filmed raising their forefingers to heaven in one last prayer as they let go of their last breath. The images from Egypt were gory to say the least, but the faith of Egyptians remains strong.