Is John Kerry A Reincarnation of Churchill? 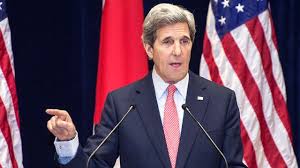 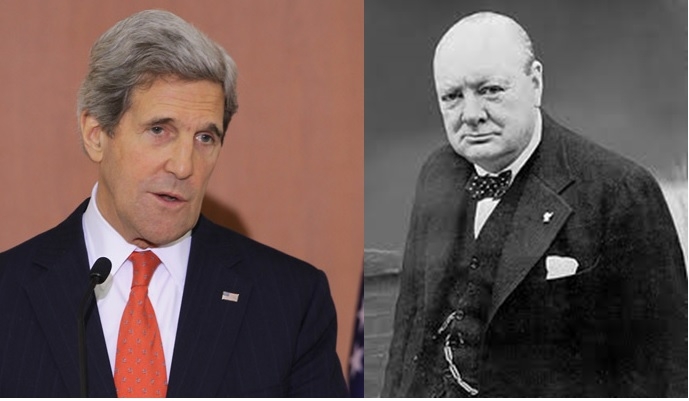 Does American Secretary of State John Kerry relish the idea of being cast as a modern-day Churchill? While we may not know whether he fancies being profiled as a clone of Britain’s Colonial Secretary, it is becoming increasingly apparent that his conduct vis-à-vis Palestine echoes that of Churchill.

In ‘The Myths of Zionism’, author John Rose describes Winston Churchill as  the minister directly responsible for the implementation of the 1917 Balfour Declaration. Upon his appointment in 1921, Churchill assumed the mantle of a ministry of ‘Arab affairs’, not too dissimilar from the South African apartheid tradition of White/European ministries of Indian, Coloured or ‘Bantu’ affairs.

Within three months Churchill found himself in the middle of a major crisis for Zionism that threatened to undermine the very basis of the Balfour Declaration. It revolved around serious anti-Zionist Arab riots yet encountered breaking out across Palestine. Britain’s response was to suspend any further Jewish immigration though Churchill made clear that the temporary measure was not intended to renege on the Balfour Declaration.

In making a comparison between Kerry and Churchill almost a century apart, I’m also intrigued by how well Kerry’s appointment of Islamophobe Martin Indyk as his point-man fits the profile of Churchill’s chief adviser on ‘Arab affairs’ the legendary British military agent ‘Lawrence of Arabia’.

Both Kerry and Indyk share a single goal with characters of a murky colonial past: security for Israel at any cost.

A hundred years later one can justifiably ask whether any changes have occurred from the time Palestine was dismembered, vast numbers of its population turned into refugees and a colossal apartheid regime imposed on stolen land?

Kerry’s mode of operation in a contemporary setting as an envoy of the world’s only superpower may have acquired a greater degree of sophistication, but the reality is that Churchill-era deceit, cunning and duplicity remain operational.

It explains why Churchill is widely revered in Israel. During November 2012, his legacy to the Zionist cause was literally cast in stone when a large bronze bust of his was unveiled in Occupied Jerusalem. British Ambassador Matthew Gould had this to say at the event: “He stood up for the rights of the Jewish people to a Jewish homeland long before it became fashionable, if it was ever fashionable”. He also lamented that not enough Israelis know of Churchill’s support for and contributions to the founding of Israel.

At the time Guardian reported that the bust is situated close to the walls of Jerusalem’s Old City and within distant sight of the monstrous 8m-high apartheid wall which cuts off Palestinian communities in East Jerusalem from the rest of the city. In a twist of irony, it observed too that the sculpture is near the King David hotel which was bombed in 1946 by “Jewish militants when it was the headquarters of the British Mandate authorities”. Ninety-one people were killed.

In his faithful continuation of Churchill’s betrayal of Palestinian rights, Kerry remains committed to Israel’s expansionist policies, for while so-called “negotiations” take place behind closed doors, illegal settlement growth increases by the minute.

And of course the role of collaborators such as Mahmoud Abbas lend false “legitimacy” to a massive fraud being perpetuated uninterruptedly for more than a hundred years under the pretext of “peace talks” resembling the sell-out of the entire Arabian Peninsula by former subservient agents such as Ibn Saud of British colonialism.

In keeping with Churchill’s approach to Ibn Saud to use his authority and influence to persuade the Arab world to accommodate Zionist aspirations, without any promises that Britain would temper its support with sensitivity to Palestinian rights, Kerry insists on doing the same via Abbas and the Palestinian Authority.

Such blatant disregard for Palestinian sensitivities, then and now, displays levels of reprehensible arrogance derived from “might” associated with superpowers to not only ignore values of justice but also to dismiss imperatives of International Law.

With the current turmoil in Egypt resulting from a military coup brought about by the American-funded Supreme Council of Armed Forces [SCAF], one wonders what else is brewing to redraw borders defining territories along sectarian lines of the type Churchill is infamous for.

Will Kerry be able to boast as Churchill did that in 1921 he created the British mandate of Trans-Jordan, the first incarnation of what still is the Kingdom of Jordan, “with the stroke of a pen, one Sunday afternoon in Cairo”?