Is the Burmese Military Keeping Rohingya Women As Sex Slaves? 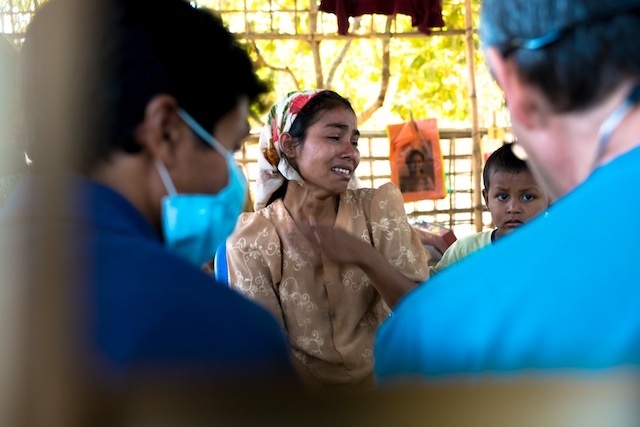 Burma’s Muslims are still having a pretty awful time of it. Last year, the country’s Buddhist majority launched a series of attacks on the minority Rohingya Muslim population, supposedly because they’re not “ethnically pure“. The attacks have continued this year and now include the general Muslim population, as well as the ethnic Rohingyas.

After monitoring the plight of the Rohingya and the two incidents of violence against them in June and October last year, I decided to fly out to Burma in wary anticipation of another round of trouble. The problem was that I had no money, no commission, no media organisation backing me and the mainstream media had pretty much stopped reporting on the issue. When I turned to the public to help fund my trip, the response was overwhelming (turns out people do have an interest in helping to expose the extended violent persecution of vulnerable minorities) and they collectively helped me raise enough money to go.

We stayed in Sittwe, the main city in Arakhan state, which is where the majority of the Rohingya camps are situated. Travelling past the police check points every morning and into the Rohingya camps, it felt like being transported into a parallel world where suddenly it’s fine to forget about your obligations as a human to not be an unscrupulous bully to a group of people just because they originally come from somewhere different to you. The Rohingya Muslims aren’t recognised as citizens of Burma, meaning they have no rights and very little access to education and healthcare.

A Rohingya boy at an unregistered internally displaced person camp in Arakhan state.

While in Sittwe, some of my contacts told me about Rohingya women being kept at a military base. I tracked down some of the eyewitnesses, but I needed to get close to the camp to confirm what I’d heard. Bear in mind that taking pictures and video of a Burmese military base obviously isn’t something to be taken lightly, and the people who’d agreed to take me there risked their lives if they were caught.

The evidence I obtained during my week in Sittwe strongly implies that the Burmese military is imprisoning Rohingya women from the Arakhan region and using them as sex slaves. That evidence has been passed on to the International Labour Organisation (ILO), a United Nations agency dealing with labour issues, who have lodged a complaint to the Burmese government and launched an investigation in an attempt to rescue the women.

Eyewitness testimony of a military camp situated a few miles from Sittwe town (and home to Regiment 270) describes around 20 women and three children under the age of eight being held at the camp. One of the witnesses, Amina (name changed), described walking past the camp when she heard voices calling out to her. The imprisoned women asked Amina if she was Muslim; she is.

“Please help us. If you can help us escape from here you will go to jannah (heaven),” one woman told her. “Many military men come, we can’t breathe. We want to become Muslim again. If we stay like this we will go to hell.” The intended meaning of what was said was, Amina felt, clear: these women are being raped, and they don’t have to say it explicitly for anyone to understand what’s taking place.

The prisoners asked Amina to pass the message on to someone who could help. “Our parents can’t find us,” they added.

A Rohingya woman at a medical clinic. Photo by Dougal Thomas.

The women only managed to speak to Amina because it was Burmese Independence Day and the soldiers were away. “We’ve been arrested here for quite a long time now. They have left us today because they have a special visitor,” they told Amina. The women continued, telling Amina that if the word was spread too much that the military would kill them, as well as warning her that she was at risk of being killed herself if she was spotted talking to them.

Amina saw three children inside the camp. Two of them popped their heads up on the windowsills and one came up to the fence so that Amina could pass through some vegetables she’d collected. “The women were crying,” she told me. “Some of them called me daughter, others called me sister.”

Amina described some of the women as pregnant, which could indicate that they’ve been prisoners since the June or October violence and have become pregnant during their imprisonment. Information relayed from various sources indicates that local villagers are aware that women are being kept as prisoners but are too scared to speak out. And as Rohingya aren’t recognised as citizens of Burma – and therefore have no rights – it’s fair to assume that the punishment inflicted on them for making these kinds of allegations wouldn’t exactly be regulated.

A Rohingya village burnt to the ground in Arakhan state. Photo by Spike Johnson.

An 18-year-old Rohingya man I interviewed described another camp 20 minutes away (which is home to the medical regiment), where another woman was apparently being held under similar conditions. He was one of around 14 rice paddy workers who went to speak Rakhine with the woman, the language spoken by the Buddhist population of Arakhan. The woman replied, “Don’t speak Rakhine with me any more, I am Muslim and a prisoner here.”

She then told the men her father’s name and where she was from. They asked her what she was doing at a military camp if she was Muslim, and if she was ready to come with them. She replied, “I have two children,” implying that her children are being used to keep her at the camp. This evidence has also been passed on to the ILO.

I tracked down other eyewitnesses, but they were mostly too afraid to speak. One woman who’d seen the women imprisoned at Regiment 270’s camp initially agreed to speak to me, but backed out after her husband threatened to divorce her if she spoke to any journalists about the situation. The Rohingya have no rights or official form of protection, and those who do speak to journalists are risking their lives, so the reluctance to divulge what they know is perfectly understandable.

The last known sighting of these women was at the end of March and it’s uncertain whether they’re still alive. It’s also uncertain if the women are still at the camp or have been split up into different camps. But what is certain is that there are innocent Rohingya women being held captive by the Burmese military and plenty of locals know about it, only it’s impossible for them to do anything about it without the threat of losing their lives.