Obama and media manufacture pretext for attack on Syria 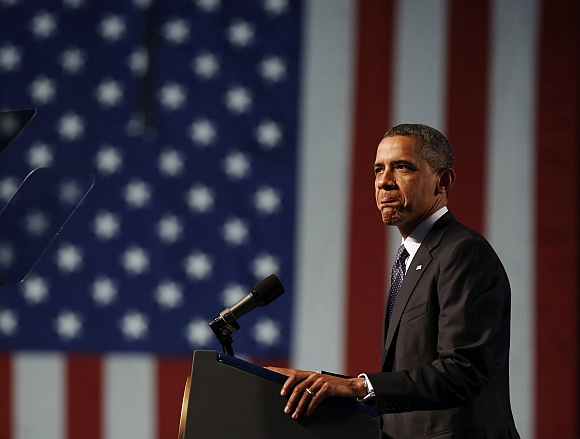 The Obama administration indicated Thursday that it was moving ahead with preparations to attack Syria, despite the absence of any legal sanction from the United Nations, and even without the participation of its closest allies. It is doing so in the face of overwhelming hostility not only from the masses of the Middle East, but also the American people.

President Barack Obama’s drive to war against Syria compares unfavorably even to the criminal operation mounted by the Bush administration against Iraq a decade ago. Now, even the “coalition of the willing” is being dispensed with, as the parliament of Washington’s closest ally, Britain, voted Thursday against military action. The US president is barely going through the motions of selling the war to the American public.

In a PBS television interview Wednesday night, Obama made his incoherent case for a US military attack on Syria. Both his answers and the interviewers’ questions underscored the fact that for the US government and the American media there is no lie too stupid or contradiction too glaring in manufacturing a pretext for war.

The alleged chemical weapons strike in the suburbs east of Damascus on August 21 has been seized upon as the justification for a unilateral and illegal US attack without the administration or the media presenting a shred of proof that it was carried out by the government of Bashar al-Assad.

The implausibility of this government carrying out such an action on the very day that United Nations weapons inspectors began their work in Damascus—at the invitation of Assad—is passed over in silence. So too is the extensive evidence that the so-called “rebels,” murderous US-backed militias in which Al Qaeda-linked Islamist formations play the leading role, have access to and have repeatedly used chemical weapons.

In the PBS interview, Obama painted Washington as merely a horrified bystander to the violent struggle that has wracked Syria for the past two years, supposedly limiting itself to diplomatic appeals and humanitarian assistance. This is a bald-faced lie. The CIA has coordinated the massive flow of arms and Islamist foreign fighters into Syria, unleashing a bloody sectarian civil war with the aim of achieving regime change. It has armed and trained anti-government forces in Jordan and sent them back into Syria under effective US command to carry out mayhem.

Despite this massive and barely covert intervention, the war for regime change has turned into a debacle, in large measure because the Syrian people are hostile to both imperialist intervention and the attempt to break up a largely secular society and impose an Islamist regime by means of sectarian slaughter.

The rush to war, with the US dismissing as an irrelevant delaying tactic the investigation by UN weapons inspectors that it had formally demanded, is determined by the speed with which the armed insurgency that it has sponsored is disintegrating.

It is hardly difficult to understand the motives of the so-called “rebels” and their handlers within the military and intelligence apparatus of Washington’s deep state for launching a missile attack and then blaming it on the Assad regime.

Having maneuvered Obama into declaring chemical weapons a “red line,” these elements can now compel the administration to undertake military action as part of a desperate bid to save face and maintain credibility. This is to be achieved through the unprovoked slaughter of Syrian men, women and children under a rain of Tomahawk cruise missiles and other high explosives.

Obama in his Wednesday interview described the coming military action as a “limited, tailored” operation, a “shot across the bow” of the Assad regime. However, once such an attack—described by some sources as days of bombardment—begins, it will inevitably expand into a war with incalculable consequences.

The justifications given by Obama for this action are both hypocritical and absurd. He claims that Washington is standing up for “not only international norms, but also America’s core self-interest.” It is always amazing how such international norms and national interest coincide only in the case of the United States, which alone claims the right to conduct global military aggression in their pursuit.

Why the US, which slaughtered nearly a quarter of a million Japanese in the atomic bombings of Hiroshima and Nagasaki, is the natural enforcer of “international norms” in the use of weaponry is never questioned by the media. More recently, the Pentagon used depleted uranium and white phosphorous in Iraq to slaughter thousands and leave a legacy of birth defects for generations to come.

US intelligence sources have told the media that the evidence implicating the Syrian regime in the August 21 attack is “no slam dunk”—that is, it is even less compelling than the bogus case for war against Iraq as it was described at the time by then-CIA Director George Tenet. And a State Department spokeswoman dismissed any speculation that the attack could have been carried out by a “rogue” element in the Syrian military, saying that Assad as commander-in-chief would still be responsible.

Curiously, such rules do not apply to Washington’s own military operations, where war crimes carried out by the American military—from Abu Ghraib to the multiple massacres in Iraq and Afghanistan—have resulted in the punishment of only junior enlisted personnel, leaving the US commander-in-chief unscathed.

Obama claimed that the US “self-interest” revolved around fears that the Syrian government’s “control over chemical weapons may erode,” allowing them “to fall into the hands of all kinds of folks” and end up being used against the US itself.

But Washington is in a de facto alliance with (and by bombing Syria will be directly protecting) precisely the “kind of folks”—Islamist forces linked to Al Qaeda—who, Obama declares, represent a threat to the American people. According to the US president, therefore, the war is being waged to keep chemical weapons out of the hands of the direct beneficiaries of the US intervention!

And by launching missile attacks against the government and armed forces controlling the bulk of chemical weapons alleged to exist in Syria, destroying their command-and-control network, the US will obviously be facilitating the efforts of Al Qaeda-linked forces to build up their own chemical weapons arsenal.

The reality is that Washington’s drive to war is laying the foundations for a terrorist attack on the American public that could dwarf 9/11.

This new war based on lies is being prepared in an atmosphere of political crisis and desperation in Washington that reflects the intense internal contradictions plaguing US imperialism. While the initial target of US cruise missiles may be Damascus, the strategic aims that underlie it lead to an ever-broadening conflict that threatens to engulf Iran, Russia and the entire planet.