Nonstop media lies in drive to war against Syria 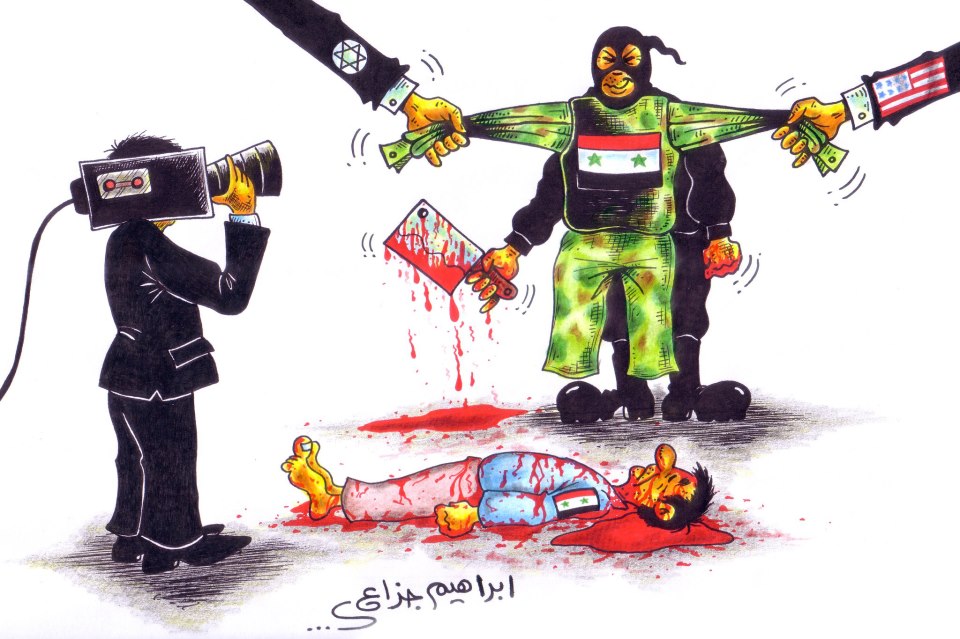 Popular opposition to the Obama administration’s drive to war against Syria is mounting, with a recent Pew Research poll showing only 29 percent of Americans favoring air strikes “in response to reports that the Syrian government used chemical weapons.” This figure would be even smaller if the government’s unsubstantiated claims of chemical weapons use by the Bashar al-Assad regime were not taken as the starting point.

The outrage felt by millions in the US and internationally over the prospect of dragging the American people into another war of aggression has been met by a mounting drumbeat for war by the Obama administration, accompanied by a non-stop media barrage of pro-war propaganda and lies.

Nowhere is this propaganda more crude than on US network and cable television. For the talking heads, former government officials, retired military officers and other hacks who populate these TV newsrooms, no lie is too big, whether told with a straight face or a smirk. Not since the Nazis has a war propaganda machine been ramped up to such heights of intensity and depths of dishonesty.

Having spent much of the previous week flicking through the news channels, this reporter can relay to the reader only a fraction of the misinformation that is presented as “fact” on US television. If one over-arching characteristic of this coverage is to be singled out, it is the degree to which the media uncritically accepts the government lies used to fan the flames of war—lies that the media personalities dutifully seek to shove down the throats of an increasingly distrustful public.

Chief among these lies is the Obama administration’s unsubstantiated claim that the Assad regime has “gassed its own people,” accompanied by footage of dead children, which, we are at times reminded, “cannot be independently verified.” Reports that the US-backed “rebel” forces may be responsible are dismissed out of hand. TV correspondents, who pass over in silence US war crimes and the mass repression carried out by Washington’s Middle East allies (Saudi Arabia, Qatar, Egypt) join in with the government’s professed moral outrage over the alleged atrocities committed by the “enemy.”

Last Tuesday afternoon (September 3), CNN’s chief international correspondent Christiane Amanpour attacked Bashar Jaafari, Syrian United Nations ambassador, during an interview. “Nobody believes what your regime has said over the last two-and-a-half years,” she declared, “because everything has been swatted away by the facts. You’ve simply escalated the war using conventional and now unconventional weapons.”

She continued her rant: “How do you sleep at night, Mr. Jaafari, defending a government that is responsible for so much bloodshed, and has really crossed the line from any kind of civil war into weapons of mass destruction? The greatest crime under international law?”

The media trundles out various military “experts” with advice on the best weapons and strategies to be employed in the US government’s military pursuits. Later in the afternoon last Tuesday, CNN reporter Tom Foreman joined Lt. Col. Rick Francona atop a giant map of Syria to discuss options for an effective “limited” military action against Syria.

Foreman: This notion of Senator [John] McCain’s that attacking the air assets of Syria could really make a difference.

Foreman: This sort of attack would allow the White House to say, yes, it punished the chemical weapons capability in a limited way. It would allow opponents of it to say at least it was a limited attack on truly military targets. And it would allow people like John McCain to say, yes, it was a diminishing of the basic capacity of the Assad government. (Addressing anchor Wolf Blitzer), Whether it will overcome the public’s doubts, Wolf, we’ll have to see.

One of the more despicable media practices is to exploit the conditions of the Syrian refugees to boost the war drive. The devastation of Syria, which is forcing thousands of people to flee the country on a daily basis, is the responsibility of the imperialist powers that have plunged the country into sectarian warfare. But the media obscenely twists this reality to obtain isolated sound bites from desperate refugees calling for a US intervention that would rain bombs on Syria and increase the misery of the civilian population.

On Tuesday evening’s “NBC Nightly News,” NBC chief foreign correspondent Richard Engel reported from Turkey, not far from the CIA station that coordinates the flow of billions of dollars in money and arms provided by Qatar and Saudi Arabia to fuel the slaughter across the Syrian border.

Engel interviewed a 17-year-old girl, a refugee from Syria who hadn’t been to school in a year. “We are waiting for help from the United States,” she said, “from any country.”

Engel then spoke with refugee Abdullah Hamadi, a cotton farmer who is now homeless. “We want America to attack,” Abdullah said. “Today, not tomorrow.” He spoke of his three-year-old daughter, suffering from dysentery. “Nobody is helping. We have no hope left, but for America.”

Engel ended his segment, telling NBC Anchor Brian Williams: “These people are putting so much hope in the United States, not because it is the country that can help, but they see Russia against them, the Syrian government bombing them and Europe and the Arab world just talking.”

The taking heads also interview the war criminals of present and past administrations, seeking their insight into diplomatic and military policy and promoting their books and other endeavors. These individuals are presented as reasonable and legitimate sources of the truth, as TV anchors engage in repartee over the plusses and minuses of military engagement.

On Thursday morning’s “Today Show” on NBC, co-host Savannah Guthrie interviewed Donald Rumsfeld, defense secretary in both the George W. Bush and Gerald Ford administrations, and one of the chief architects of the wars in Iraq and Afghanistan.

Guthrie: You had some tough words for President Obama at an event yesterday. You said this plan for sort of a shot across the bow, limited strikes, would be ineffective and an embarrassment for the United States. My question to you is, would it be better to do something limited or do nothing at all?

Rumsfeld: Oh, I think that if he gets support of Congress that’s probably a useful thing. On the other hand, he did not need to go to Congress. President after president has recognized that the authorities they have as commander-in-chief enable them to use force, within reason, and then at some point go to the Congress.

More often than not, the various television presenters do not even make a pretense of being objective, and cannot restrain themselves from expressing their ignorant, anti-democratic views. The following exchange took place last Wednesday morning between CNN’s Carol Costello and Rep. Matt Salmon, Republican of Arizona, who is planning to vote against authorization for a Syrian strike.

Costello: The president said there’s no immediate threat to the United States, but if you let people like Assad get away with this kind of thing, in the future what’s to stop Assad and other dictators who have chemical weapons from unleashing them on the United States? What could convince you to open your mind to the thought of a military strike against Syria?

Salmon: It’s going to be very difficult to convince me that this is one that the United States should be involved in.

Costello: What if the president goes ahead with a military strike no matter what Congress does… Sometimes we have to disregard public opinion and do what’s right for the country.

Geist asked, “How can [Obama] change the opinions of Americans? Does he have to do an Oval Office address, as some have reported he might consider?”

Gregory responded, “Yes, and Secretary of State John Kerry has said that he will address the American people in a few days. So I think the White House has had to shift their strategy here. Nothing to announce officially, but clearly they’ve got to make the case. The president has been told internally by advisers and by outside advisers that he’s got to take the public to school a little bit here—explain what’s at stake in Syria and make a broader case.

“Initially, they wanted to do this quickly. They wanted to not make as big of a deal out of this. They didn’t want to raise the specter that they were going to war like the United States was in Iraq. I think he’s got to shift gears here and really make the case that this is do or die here for the United States, that there is something really serious at risk.”

Gregory added, “The irony, Willie, is that the president has created a situation where you have to ask, how does he not strike Syria—making comparisons to Adolf Hitler, talking about US credibility on the line—even if Congress doesn’t give him the authority.”

Gregory’s reference to Adolf Hitler was not in relation to the war policy of the Obama administration, but rather to Assad. And he suggested that the president should proceed with an illegal attack on Syria, in contravention of international law, with or without the authorization of Congress.