Obama at the crossroad of war and UN diplomacy 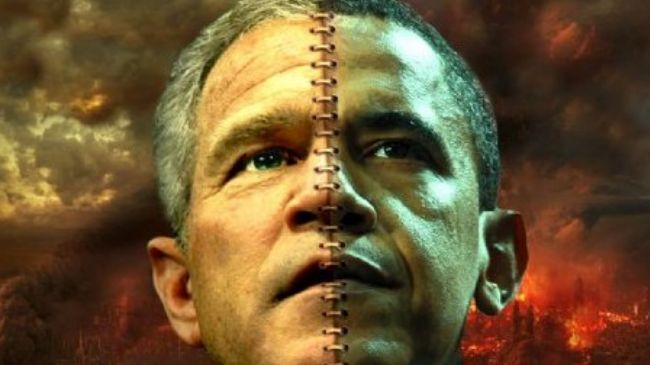 US President Barack Obama may hold a degree as a constitutional lawyer, yet increasingly his warmongering behavior toward Syria reflects a rogue president who is apt to repeat the mistakes of his predecessor, George W. Bush, from whom Obama inherited two unfinished wars in the Middle East and a whopping 2 trillion dollar bill.

According to the Los Angeles Times on Sunday, September 8, Pentagon is planning an intense three-days strike that involves strategic bombers, as well as five US missile destroyers currently patrolling the eastern Mediterranean Sea, to launch cruise missiles and air-to-surface missiles from far out of range of Syrian air defenses. Clearly, this is far from a “very limited” strike that the Obama administration has been selling to the public and includes “many more” targets than the initial list of 50 military targets.

The question now is if Obama will proceed with this plan and give the go-ahead this week, or will he wait for the result of Congressional debate on the authorization for war which he himself has initiated, in the light of mounting congressional opposition that reflects the national sentiment against war? Both Obama and US Secretary of State John Kerry have hinted that they may go ahead even without a congressional approval, thus prompting the threats of impeachment by some members of Congress including the Republican Duncan Hunter, who has criticized US acting as “al-Qaeda’s air force” since it is a well-known fact that the leading Syrian rebel groups have strong al-Qaeda ties and would be much strengthened as a result of a US attack aimed at depleting the Syrian regime’s military capability.

With the US Congress convening this week to debate the president’s war plan on Syria, Obama hopes to generate more support through a televised address to the nation, which some analysts fear may be intended to short circuit the process and signal the start of the attack prior to either a congressional vote or the UN report on the August 21 gas attack in a Damascus suburb.

Veering uncomfortably between contrasting choices, each of which carries certain pros and cons for Obama’s as well as US’s credibility, the White House is caught in the thorns of a policy dilemma that effectively make this week one of the most crucial weeks in Obama’s presidency. Drawing a lesson from the Libya campaign, when the skeptical US public and Congress shifted in favor of the president’s decision once the bombs started dropping, the administration is reportedly leaning in the direction of launching the attack and thus silence the congressional opposition.

At the same time, given the risks of such a military gambit in Syria, including the threats of a wider war, extensive civilian casualties due to the proximity of military targets to civilian centers, etc., the Obama administration is contemplating a new UN initiative, reflected in Kerry’s statement that the US may seek a new UN Security Council resolution on Syria. Kerry’s statement, made in Europe, where there is considerable opposition to the war as clearly demonstrated at the G-20 summit in St. Petersburg last week, may reflect a step back from war in the face of growing domestic and international opposition.

The benefit of a renewed effort at UN Security Council to tackle the Syrian crisis is that it compensates for the total absence of any legal authority for Obama’s planned war on Syria. Even NATO, unlike the Libya campaign, has refused to back this plan, and henceforth a US attack on Syria would be universally condemned as illegal and contrary to the principles of international law.

Of course, it is a sure bet that China and Russia will block any resolution that endorses military action on Syria, as they did with respect to the UK-led initiative two weeks ago. Still, the one positive result of the G-20 summit may have been the 20-minute bilateral meeting between Obama and Putin, who has insisted that without UN authorization any US action would be considered an act of “aggression,” a view tacitly endorsed by UN Secretary General Ban Ki-Moon.

With Moscow and Washington working together for months to bring about a Syrian peace conference in Geneva, coming back to the Security Council is a prudent step forward that can potentially yield positive results in terms of prioritizing the political process over the military option. In that case, the US may use its leverage of threat of military strike to push Russia and China to lean on Assad’s regime for greater flexibility on the political and diplomatic front.

War or diplomacy? Which path will the White House ultimately choose? This is an important question that will be cleared in the coming days. What is certain, however, is that the US military option is in full swing and the temptation to use it and thus change the military landscape in the Syrian theater of conflict may prove too great to hold back, particularly since Israel and the pro-Israel lobbyists are pushing hard for the US strike that, as stated above, appears to be imminent and much more comprehensive, albeit in a compressed duration, irrespective of the public opposition.