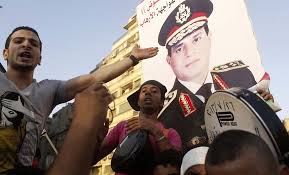 In the end, though, Morsi’s flaws and failures pale into insignificance when compared with the trauma of the past 100 days

It has become an almost established tradition for political analysts to review the first 100 days of any president or administration. This is the case with elected governments as well as those that are unelected. Egypt’s controversial and shadowy military junta is no exception. In its case, it is absolutely necessary to do a thorough appraisal both because of the manner in which it came to power and the consequences of its policies. On 11 October, Egypt’s de facto military rulers will mark 100 days in office.

It is not just political commentators who are fixated with the occasion. Social media activists are also gearing up with plans for various forms of protest.

To add a sense of balance and context to the assessment, the rule of the deposed elected president Mohamed Morsi must also be revisited. The overall picture after comparing the two is likely to make very uncomfortable reading for those who openly or tacitly supported the coup.

Since 3 July, more than 6,000 Egyptians have been killed by the army and security forces with over 15,000 injured in the bloody crackdowns and dawn raids, which are still continuing. The Egyptian military is engaged on what can best be described as a war of attrition against its opponents and critics.

During this short period, the country seems to have changed beyond recognition socially, economically and politically. Once a proud beacon of Islamic learning and civilisation, Egyptians are being told today that their religion is backward and a source of retrogression. Those who buck this trend are liable to end up in prison, undergo torture and even lose their lives.

On the surface, this appears to be done to placate Egypt’s raucous liberal and secular forces. Now that they have been outfoxed by the army it has become palpably clear to everyone that the sole beneficiaries of the “popular” coup are the military elite.

The facts speak for themselves. Economically, the country has registered losses in excess of 200 billion Egyptian pounds, according to the Coalition in Support of the Legitimacy. Since 3 July, Egypt’s National Railways Authority has revealed that its losses have amounted to 190 million Egyptian pounds as a result of the stoppage of services.

By the beginning of September, the respected British magazine The Economist Intelligence Unit’s liveability survey had, for the first time, placed Egypt last on a list of 140 countries around the world regarding standards of living. Experts predict a deficit in the general budget of around 240 billion Egyptian pounds at the end of the financial year.

Meanwhile, negotiations with the IMF have ground to a halt; international companies which provided employment for tens of thousands of local workers have pulled out of the country, partly in fear and partly in protest against the coup and its grisly human rights record. The textile, automobile and electronic industries have all suffered badly, but the tourism industry is perhaps the sector worst affected by the coup. Several countries have issued warnings to their nationals not to travel to Egypt. The country has suffered a sharp drop in the number of tourists, costing the state millions of dollars in lost revenues.

Deposed President Morsi was no paragon of success. He admitted as much when he told a rally of thousands at Cairo Stadium on 6 October 2102, “What has been achieved is not enough, of course, but what has been achieved by professional standards is about 70 per cent of what we targeted during those 100 days.” His critics claim that his estimate is overblown.

During Morsi’s first hundred days in office, the Egyptian Centre for Public Opinion research, Baseera, conducted three opinion polls on presidential job approval ratings. They revealed that Morsi enjoyed a high approval rate, with 78 per cent of respondents happy with his performance, while only 15 per cent disapproved; 7 per cent weren’t sure.

None of these indices apply to the junta because they were not even elected.

In retrospect, Morsi’s fatal error was his controversial constitutional declaration of 22 November 2012, in which he sought to safeguard his decisions from judicial review. This caused his approval rating to drop to 57 per cent, 21 percentage points down from his “100 day” rating. Although this improved slightly to 63 per cent after he made a public u-turn, the damage was already done. He never really recovered.

In the end, though, Morsi’s flaws and failures pale into insignificance when compared with the trauma of the past 100 days. The military junta are not the only ones that should be held responsible; the cheer-leaders who clapped and the hangers-on who canvassed to feather their own nests all have questions to answer.

Basic questions, such as: What is the status of Egypt’s tourist industry today? What has the Sisi-led government done to alleviate the suffering of the 16 million Egyptians who work in this sector? After 100 days of blood-letting and carnage can anyone truthfully say that Egypt is a more harmonious and cohesive country, or is it dangerously fractured? Has its international standing improved? Or has it become a pariah on the African continent and among the wider community of nations?

Only honest and bold decisions by the junta and those who back them can pull Egypt back from the abyss and turn the 100 days of pure farce into something much more positive for all Egyptians, not just the elite. The countdown has started and the clock is ticking.