Can the coup last without more oppression? 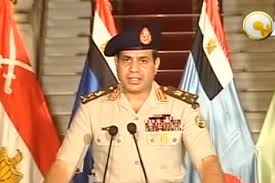 It has been 100 days since a military coup ousted Egypt’s first civilian elected president, Mohammed Morsi on July 3. We don’t know how much Morsi knows about the coup or if he had any inkling of it beforehand, what he did and so on, as he and his aides and advisors have been in detention ever since. However for many observers the coup was in the making for months.

Ever since Morsi’s controversial constitutional declaration last November it has been clear that the Egyptian army, headed by the then Defence Minister Abdel Fattah Al-Sisi, was playing a political role as a mediator. He became more visible in the public sphere, sporting trademark black sunglasses, commenting on political issues, inviting and taking photos with artists and singers, looking ever more like a charismatic leader not just a minister in a cabinet. That, like many other signs, appears to have passed unnoticed by the presidency.

A leaked video on the Rassd News Network last week showed Al-Sisi telling an army officer about extending “the arms” of the military in the Egyptian media and that although the process has started it will take months to succeed. Rassd, which is close to the Muslim Brotherhood, said that the date of the video was 24 December 2012. The coup would not have been possible without close cooperation and coordination between its leaders and the media, both state owned and supposedly independent.

A media campaign of fabrications and insults against Morsi, his government and the Muslim Brotherhood intensified from last December. They were blamed for all of Egypt’s woes; there were no good news stories about them. The campaign also appears to have gone unnoticed by the presidency, with little or no effort made to counter it and its damaging influence.

Morsi and his government did make mistakes, like any administration, especially after 30 years of Mubarak’s mismanagement and 60 years of military rule which left behind it the so called “deep state”. However, nothing justifies the crimes committed against Morsi and his officials and the coup government’s attempts to eradicate the movement from the political scene and Egyptian life.

One hundred days later and the coup is still facing opposition inside Egypt and in the international media, this despite the massacres and detentions which haven’t deterred the people from taking to the streets. No matter how many diplomatic efforts are made, it is still being called a coup by honest politicians and governments. The Egyptian economy is deteriorating and polarisation is growing, setting brother against brother.

The coup leadership clearly thought that opposition would pass and the country could move on, but this hasn’t happened. The people want their democracy back. None of the demands of the January 25 Revolution have been met, nor have any of the so-called counter-revolution of June 30th.

It is hard to see where the coup goes from here or how it will stay in power without further killings and oppression. It has even started to eliminate some of its own supporters