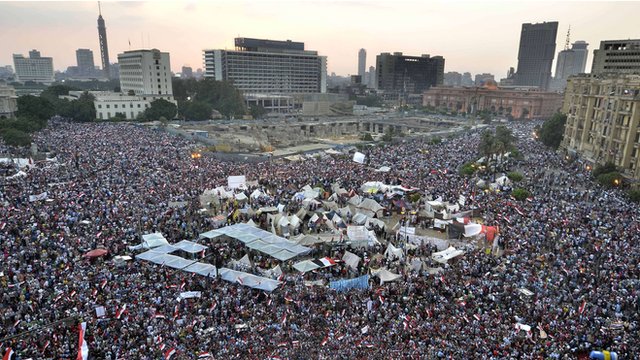 The latest Russian-American truce in Syria does not mean that the crisis is over. Far from it. The insurgency in Syria seems to have overshadowed another crisis in the region.

The overthrow of Mohammed Morsi, the democratically elected President of Egypt and member of the Muslim Brotherhood, has left Egypt in political turmoil, disorder and chaos.

In 2011 the call for bread,  freedom and social justice reverberated throughout the length and breadth of Egypt. This call has now been brutally silenced by the Western and regionally  supported military led by  Al Sisi. The entire Muslim Brotherhood leadership is now in detention, including Morsi. Charges include incitement and murder. In fact some have already been sentenced to life imprisonment.

Egypt finds itself in the midst of one of its bloodiest episodes in decades, a crisis that has split the country apart. It is now entrenched in an even more regressive authoritarian order than the one that preceded it. The state of emergency allows for indefinite detention and a curfew enforced by army soldiers backed by tanks.

The country is now staunchly under the control of the army, aided by a submissive state and private media outlets that have helped whip up a wave of bigoted nationalist sentiment, praising  the army and police and demonizing the Brotherhood. The military is conducting the crackdown under the rhetoric of a “war on terror,” with a divisive discourse that paints nearly all Islamists as terrorists unfit for political life. Most of the so-called liberal elite, political pundits, and youth groups have jumped on the bandwagon.

Today, Egypt is a crisis-state par excellence. It is oscillating between models of Algerian, Somali and Syrian disasters and it has caught fire from the flames left behind by guns. What is even more dangerous than this is the spread of hate through the media, which attacks people as though it were a den of hungry lions.

It is clear, in the aftermath of the Egyptian coup, that the security device of the Mubarak era remained entirely integral, untouched and shameless. While Morsi was in power, the security apparatus appeared reluctant to perform their judicial responsibilities. They failed to investigate crimes and apprehend the perpetrators. The depth of corruption in this sector was extensive. While in Office President Morsi assessed several options to reform the security sector. These options were massive and the President would have had to invoke extra-judicial powers. He was reluctant to do so. He did not want to set dangerous precedents.

Under military rule, state institutions have become tools of unprovoked  oppression. The army  is uncaring and ruthless with no respect for Egyptian lives

The Muslim Brotherhood has declared openly that their demonstrations will remain peaceful and true to their humanity and conscience. They are determined to defend their country against dictatorship and tyranny. They will ensure a free and prosperous future for their children.

In the words of the former head of Mossad,  Ephraim Halevy, Al Sisi, together  with his regional allies led by Saudi Arabia, intended to inflict a reverberating defeat on the Muslim Brotherhood.  Israel has also maintained a close and enthusiastic relationship with Al Sisi  with whom they coordinated joint efforts in the security machinery in Sinai. The coup engineers have no intention of bringing the Brotherhood back into mainstream Egyptian politics. Instead, the process to label the Brotherhood as a “terrorist” organisation has been set in motion because of its close ties with Hamas and Hizbullah. The Brotherhood is officially a banned organisation.

To quote Robert Fisk:  “The language speaks for itself. Not just a common or garden “terrorist” plot – but a “terrorist” plot so terrible that it is “malicious”. Naturally, the government acquired this use of the “terrorist” word from Bush and Blair, another Western contribution to Arab culture”. This “terrorist” label, Al Sisi and his allies hope, will unseat the Brotherhood completely from Egyptian politics. In the short term they may seem to have succeeded, but let us not forget the 85 year history of the Muslim Brotherhood. Their social, economic and political foundations remain intact.

The ousting of Morsi has shown that the Brotherhood, though  well organised,  had very little political vision. Within their ranks they lacked the expertise to man state institutions such as the judiciary and the security cluster. To overcome this, he looked to the old order to assist. This proved to be a costly error of judgement. They were not prepared to sacrifice the privileges they enjoyed under the Mubarak regime. The democratically elected Morsi became a lame duck president and destined to fail.

It is very hard sometimes to  participate in the sorrows of this world   when we witness so much injustice, so much poverty, so many deaths, and so much hypocrisy.   How do we participate in a meaningful  and moral way in such a world?  How do we know if we are making a difference  or are we failing to do so?    We struggle with these questions daily because we see so much destruction, death, hypocrisy, and stupidity.

Democracy in Egypt has been aborted like an unwanted foetus. The West’s support for the coup can only be described as disgraceful. It is a gross violation of international law. The military does not represent the free will of the Egyptian people. They are more answerable to Washington, Tel Aviv and Saudi Arabia than they are to their own masses. In addition, they value the “legitimacy” that comes from America’s acceptance more than that which comes from their own people’s acceptance.