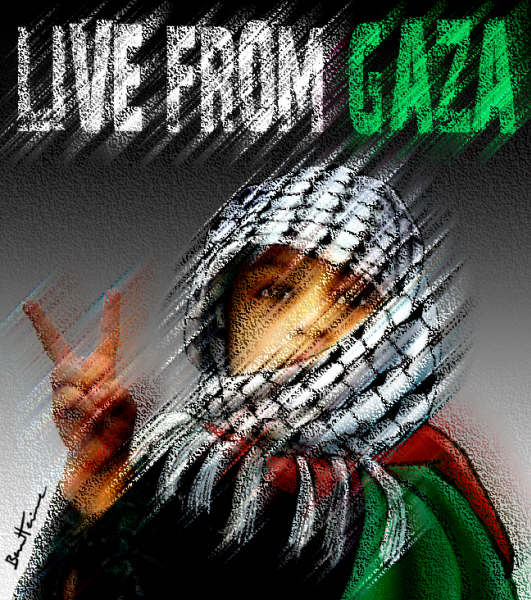 Before leaving for Gaza I was well aware of the statistics in the region which has been under siege since 2007. 54 percent of households face food insecurity with 38 percent of the population living below the poverty line. Due to lack of fuel, the Gaza Power Plant runs at 45 percent capacity, leading to daily blackouts of eight to twelve hours. The Gaza aquifer provides 90 percent of Gaza’s water with only ten percent of that water meeting the standards of being suitable for consumption. Unemployment is at 45.2 percent, with only 40.3 percent of working-age Gazans in the labor force. Youth unemployment is at more than 47 percent. However, being well aware of the numbers and seeing the devastation of an entire population living under a constant siege via land, air and sea are two completely different things.

We arrived to the gruesome reality of the Gazan population-the funeral of a 3 and half year old girl, Hala AbuSbeikha. She had been martyred by an Israeli tank which had fired at her home. During the Gaza Massacre of 2008/9 it was widely circulated on the news that 313 children had been killed. 313 Gazan children and so it seemed appropriate that the world forget that Israel had murdered babies. For me too, 313 had merely become a number to use when trying to expose the racist ideology that governed Israel today-Zionism. I had forgotten what this number meant. I, along with the rest of the world, had forgotten that 313 little angels, innocent of any crime besides that of being Palestinian and not Israeli, had not lived the lives they should have.

We arrived at little Hala’s house, situated in the Al-maghazi refugee camp which is in close proximity to the Israeli border and often a target of Israeli fire, to be awakened to the stark reality of what the death of one little child meant. We saw the side of Hala’s house completely destroyed- an entire home reduced to rubble within a minute. It was the middle of winter and freezing, and I thought about the fact that the AbuSbeikha family would have to deal with not only the coldness left in their hearts by Hala’s absence but the harsh winters of Gaza as well that night- and for many more nights to come too undoubtedly. We stood in little Hala’s garden where her blood was still evident on the bricks- as she played innocently with her two other sisters (both of whom were in hospital with injuries as well) a piece of shrapnel penetrated her neck and stole her precious life. We met Hala’s mother, whose strength as she held one of Hala’s younger sisters was enough to move mountains. She stood there, the epitome of resilience and faith, representing what I would soon come to realise lay in the heart of every Gazan- an unconquerable hope and steadfastness you will never find in another population in the world. We witnessed Hala’s funeral procession, as the community of Al-maghazi did what seemed to have become something they were accustomed to- laying a 3 and half year old girl to rest amongst the olive groves. I wondered if the world would have been as silent as the atmosphere was in Al-maghazi that morning if Hala had been an American girl?  Probably not.

We drove past a school in a region called al-fakhoora. During the Gaza massacre of 2008/9 many children slept over at this school and had stayed away from their homes- their parents thinking it would be a safe haven for their children. Little did they know that Israel’s indiscriminate killing and targeting of a civilian population knew no bounds, and the very street outside the school where a group of children were playing football was bombed. 40 children were murdered instantly. It was surreal driving through the very street where the remnants of the world’s silence and stench of hypocrisy towards the people of Gaza was so evident.

Sometimes, surviving the onslaught from Israel is not always the safer option for the children of Gaza. “There is a significant deterioration in the psychological well-being of Palestinian children who are living in the Gaza Strip, especially after the recent war,” Ayesha Samour, director of the Psychiatric Hospital in Gaza, told IRIN. According to a study by NGO Ard al-Insan in Gaza, 73 percent of Gaza children are still suffering from psychological and behavioural disorders, including psychological trauma, nightmares, involuntary urination, high blood pressure and diabetes. Samour said children in Gaza were being denied a normal childhood because of the insecurity and instability in their environment. He said a culture of violence and death had pervaded their mentalities, making them angrier and more aggressive.

This was the sad, yet real, beginning of our trip to Gaza. We knew all about the fuel shortages present in Gaza due to restrictions on goods and basic amenities imposed on the 1, 8 million strong population. While we were there the reality of it all became apparent. We arrived in Gaza in the evening, having been held on the Egyptian side of the Rafah crossing for 4 hours. Gaza was in total darkness. The intensity of the desert darkness was so extreme that you could barely see your hand in front of you. On our arrival each household was receiving only 6 hours of electricity a day, and by the time we left (8 days later) this had been further reduced to just 4 hours. What did these numbers mean? If electricity was restored at two am, mothers had to wake up at two in the morning to complete their household chores.  Because of the northern winter sunset at 5pm, households were plunged into complete darkness for the rest of the night- forcing families to do whatever they could by candlelight. It meant students, who were busy with exams when we were in Gaza, had to study by candlelight or whatever other means necessary and yet they still persevered. It also meant more deaths, and we were shocked to hear of the death of a 6 year old girl due to smoke inhalation while we were there.

Personally, this trip was a huge eye-opener. Gaza is not about numbers- it is about the humans living there. It is about the real struggles they face every day.  The real truth is they have to bury their children and survive under abnormal conditions being starved of amenities which the rest of the world takes for granted. Through all this, it is the warmth of their hearts; the unbelievable strength of their spirits and the unrelenting desire to live that moved me most. The democratically elected government, Hamas, rules Gaza in the best possible way that they can. Creating the most amenable living conditions for their citizens is obviously their primary concern, implementing laws to make living for the besieged population as liveable as is humanly possible under the severest siege environments.

Gaza is very much alive. Their faith and hope does not allow them to give up in a situation which I am convinced any other population would have already perished.